Poverty is not a Disease 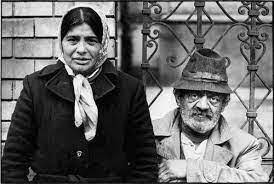 Poverty isn't something you "catch" from others, including your parents.
It isn't a destiny or in your DNA, either.


On National People's Radio this morning was a story about a book written by a professor in Boston about "Scarcity".   I found it hard to take seriously, as the set-up for the story was how the professor procrastinated about getting his car inspected and as a result was driving around with an expired inspection sticker, and taking detours to avoid cops and thus being late for appointments.   His conclusion was, apparently, that the scarcity of time in his life made him make poor choices.

My conclusion is that he is a bonehead professor from Boston who can't get his shit together.  The world (at least the USA) is full of idiots like this - people who say they are "so busy" all the time, but in reality, just clog their own schedules with nonsense, and thus create this "busy" mentality, which I think fuels their feelings of self-worth and self-aggrandizement.   After all, if you are so "busy" all the time, you must be an important person - like a college professor!

What irked me further (and as you can see, I get irked a lot) was the next argument.   He argued that scarcity of time and scarcity of money work the same way, and when something is "scarce" it causes people to act in different ways - psychologically - and thus make poor choices (in every sense of the word) like our bonehead college professor failing to get his car inspected (because he doesn't have enough time).

They go on to say that "the poor make poor choices in life," apparently as a result of this "scarcity."   At that point, I had to get out of bed and shut off the radio.   I'll say this for NPR - it is so annoying it always gets me out of bed in the morning.

There are two problems with the statement "the poor make poor choices in life."   First is that it puts the cart before the horse.  The poor are poor because they make poor choices in life.   And it starts at an early age.  You may come from a poor family and be born into poverty.  But often the choices you make determine whether you stay there or work your way up.   And usually the first poor choice occurs in school, where a poor person trades off his education and his future in order to be popular with his peer group.   It goes downhill from there.

The poor remain poor because they get payday loans, and title pawn loans, and do drugs and get a girl pregnant in the 9th grade.   They buy bling rims and furniture on time and buy-here-pay-here used cars.  They pay $25 to cash a check at a check-cashing store.  They buy lottery tickets, $20 at a time.   They spend all day doing drugs or drinking beer.  They make one bonehead decision after another - which is what makes them poor.

And that brings me to the second point.  Being poor is not a disease or a natural condition.   The attitude of the article on NPR presupposed that there were just people who were poor, period, by accident or happenstance.   It was like a medical condition you catch, like polio or something and once you have it, well, there you are.  They talk about "the poor" as if it were an institution.

Being poor is not a disease or illness that you just catch.    You can't be "cured" by emergency treatment at the hospital.  "Quick, Nurse!  Another infusion of cash!  This patient is bleeding to death!"   It doesn't work that way.

Poverty is caused by a number of things, but perpetuated by poor life choices.  And I say this with some authority in that I made a lot of poor life choices - and saw my friends make poor life choices - which caused me to slip down the economic ladder.   I started making different choices, and well, I'm no longer in danger of being poor.  For the time being, anyway.

It is, in a way, like dieting.  The dieter looks for quick and easy fixes to lose weight - so they click on "one trick of the tiny belly" and hand over their credit card information to some odious internet operator.   Rather than do the hard thing and make hard choices, they try to take short-cuts to success - often shortcuts that lead then nowhere.   And when it all fails miserably, they feel dejected and low and find solace in a quart of ice cream.

Financially, people work the same way.  They try to get ahead in life, but get distracted by "tricks and tips" that they think are shortcuts - convinced that working hard and saving money is just for chumps, and the folks "in the know" use shortcuts to success.   But those folks "in the know" are just selling the idea of shortcuts to success, and profiting wildly from the misery of the poor by dangling out this bait and then crushing their hopes.

So the poor person, who once again butts his head against the economic wall of life, decides that "getting ahead" isn't worth trying, and why not drown your sorrows in some rent-to-own furniture or bling rims?   Why not make yourself feel good today and forget about tomorrow?   It is the same shoe on a different foot.

And sadly, this college professor from Boston didn't get this.  He felt that the answer was that scarcity caused people to make bad choices - as if having only $10 in your pocket merely forced you to squander it even faster, rather than slower.  And the underlying presumption here is, that it is inevitable and cannot be helped.

And I have to disagree with this concept, as it negates the concept of human choice - and thus negates the entire concept of our humanity.  If we pre-suppose that nothing we do makes any difference in our lives - and hand our over our lives to to the fates - then we give up on living and give up on what it means to be human.   At that point, we are little more than cattle, being lead to slaughter.

This illustrates the dichotomy in the two views of our society - one view being that we are all "victims" of fate and our lives, and those "lucky" enough to "strike it rich" did so through sheer change or circumstance.   A second view is that, while fate plays a huge role in our lives, the choices we do make, do make a difference, and trivializing those choices trivializes our lives as a whole.

Or to put it succinctly, I may be Liberal, but I am not a wacky liberal.
The cause of poverty is not rocket science.   It is a psychological condition - a mindset if you will.   Once you start thinking poor, you become poor or stay poor.  Once you think, "this is all I deserve" it rapidly becomes a self-fulfilling prophesy.
Newer Post Older Post Home