Going Broke, one fast-food meal at a time. 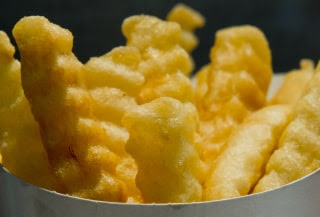 Finally, a financial story in the mainstream media that isn't about trendy stock-picking or how to score the best "rewards" credit cards.

A simple basic story that makes a basic point:  Using a restaurant as your kitchen not only will make you fat and unhealthy - it will drive you to bankruptcy.

Middle-class people are particularly susceptible to this.   Too tired from working hard, or "too busy to cook", they send out for pizza, eat lunch at a restaurant near work, or order a $5 Starbucks, instead of making their own damn coffee.

And the cost?  Staggering.   The cost of restaurant food - even plebeian chain restaurants like Olive Garden, or fast-food restaurants like McDonald's  - can be five to ten times more costly than buying food at a grocery store and preparing it at home.

Of course, convenience foods bought at a grocery store are not much better - but are big profit centers for the stores.  Pre-made frozen meals and sandwiches from the deli are big profit-makers.

Suppose you order a pizza one night a week, spending $20 including tip.  And you eat lunch four days a week, spending $10 each time.   A couple of nights a week, you and the spouse go to a medium-priced restaurant and spend $50 each time.   And maybe you have a designer coffee three times a week for $15.   Throw in a three breakfast sandwiches a week, at $5 for the "meal" for $15.   That's $190 in meals that would likely cost you less than $30 to prepare yourself.

Whew!   And all for a little convenience.

And yet I know people who do this - use restaurants as their kitchen, and eat out nearly every night of the week - and every lunch at work.   And they wonder where the money all went.   It went there.
Newer Post Older Post Home