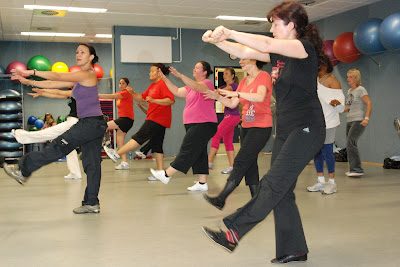 Every year, a new fitness fad takes hold in America.   What is this all about?

Exercising and Athletics are as old as the Olympics.  Staying in shape is hardly some new science that has just been discovered.   But despite this simple fact, every year, a new fitness craze takes hold - usually directed at women - promising to do what last year's fitness craze failed to do.

These trends pop up like spring daisies and then disappear in a flash.   They are, in short, fads.

This year, it is something called "Zumba" which appears to be what we used to call "Aerobics" back in the 1980's (itself another fad, but one that has entered the lexicon).   Last year, it was "Spin training" which sounds like you spin around in a circle, but actually is just the more plebeian pedaling on a stationary bicycle.   "Stationary Bicycle" doesn't sound like much fun.  Spin training, on the other hand, sounds dizzying.

And the list goes on and on.   They have something called Nordic Walking, where you walk around with shortened ski poles (no, really).  They even give you lessons on how to walk.  No, really, I am not kidding.

How about Tae Bo?  The Shake Weight?  The Thighmaster?  The Ab Cruncher?  8 minute Abs?  Boot Camps?  Nordic Trac? The Bowflex? Pilates?  The Jane Fonda Workout tapes?  Remember Aquarobics?  Remember Richard Simmons and "Sweatin' to the Oldies"?  If you are really old, you remember Jack LaLanne and his workout routine.  Fitness in America is big business, and has been, for decades.   But in order to "sell" your fitness training, you need a catchy name for your workout routine - even if it is just a variation on the same old thing.  It is hard to get the plebes excited about anything unless you can put a new trendy name to it.

A few years back, a new chain of women's fitness centers called Curves sprouted up, almost overnight, nearly everywhere, or so it seemed.  But like most franchises, after sudden expansion, comes the inevitable retraction.  Franchises make money by selling franchises - which are very profitable.  The running of actual franchises is often less than profitable, particularly in sparsely populated franchise areas.  And franchises that are based on exercise fads?  Decline is inevitable.

The list of fitness fads is pretty long.   And the list of fitness flops is pretty amazing, too.  But what most of them have in common is that they are just a re-packaging of the same old formulas.   Exercise has not been re-invented or re-imagined in the last 50 years.   You either engage in repetitive exercises, to build slow-twitch endurance muscles (bicycling, swimming, dancing, and the like) or lift weights (or other resistive exercises) to build fast-twitch muscles, or some combination of both.

The main reason for exercising, is of course, to maintain your health.   You want to exercise to keep your heart in shape and maintain muscle tone.   Sadly, the main reason most people - particularly women - exercise, is for vanity's sake - to maintain a sexually attractive appearance.   And oddly enough, most women's exercises are aimed at the endurance-type slow-twitch muscles.  These type of muscles have less definition than the fast-twitch body-builder type.   Bicycling and dancing aerobics are good for you, but they are going to make your ass look larger, not smaller, over time, as you build up a big honking set of slow-twitch thigh muscles.

So, how does this relate to personal finances?  A lot.   Many folks sign up for gym memberships, buy special clothes, weights, mats, and other accessories, and then make personal promises to improve their fitness.   It is a classic self-defeating process.   Not having "time" to drive to the fitness center and feeling like a fool wearing odd clothes and doing weird dances, they quickly drop out.   In one blog I recently read, a woman complaining about her personal finances admitted that she had a gym membership that was six months old, but had only been once to sign up.   She was "thinking" about cancelling it, but thought that, "well, you never know, I might start going someday."

A friend of mine falls into this trap - signing up for various classes every year, and then not going.   This year, it is Zumba, which she is very excited about - forgetting that she was just as excited about Spin Training last year, and Pilates the year before.   Funny, but she doesn't talk about Spin Training anymore, and I doubt she remembers going to Pilates class.  I suspect in three months, she will be strangely silent about Zumba as well.   And next year, I am sure she will regale me about the "latest thing" in fitness, which will sound an awful lot like last year's thing, at least to me.

And in a nutshell, that is how classic subscription fatigue sets in - where people sign up for monthly services that are never or rarely used, but are reluctant to drop them.  They get depressed, of course, and then the low-self-esteem engine kicks in.  I suspect that more than half the income for any gym or fitness center is from dues paid by people who never show up.

A better approach might be to go to a gym or fitness center where they allow you to pay by-the-day, so no long-term contract is required.   Of course, they will pressure you into signing a long-term contract, and most fitness centers and gyms have a host of salespeople who do nothing but sign up new members.  These same salespeople will try to shame you, if you try to drop your membership.  But paying by-the-day means you can pay for only what you use.

An even better approach is to just find other ways to achieve fitness.  That rusty old bicycle in your garage can provide "spin training" if you pump up the tires and put a little WD-40 on the chain.   Even just walking a mile or two every day may be more than enough exercise (or more than you are getting).   And even if you neglect to do these things, the neglecting is free, at least, and if you want to feel bad about yourself for not exercising, at least you don't have to compound it by feeling bad about yourself for squandering money as well.

Trends and fads are rarely worth following for the simple reason that they are just marketing techniques.  In the case of fitness, it is a trendy name given to something that largely already exists.   And you can see why they do it - trying to market fitness is hard enough, but without some sort of "spin" (pardon the pun) to put on it, it is hard to "sell the sizzle" so-to-speak for what is, in essence, a very boring and sweaty procedure that most people, if they stopped to think about it, would not actually pay for.

On the other hand, if you want to get rich in America, you need only come up with the next fitness craze.   You'll need a trendy name and perhaps a celebrity endorsement.  Preferably, there should be a line of special clothing or equipment that is needed that you can sell or rent.  If you can throw in a line of "electrolyte" drinks and "energy" pills, so much the better.  Be sure not to neglect the line of books and videos as well.