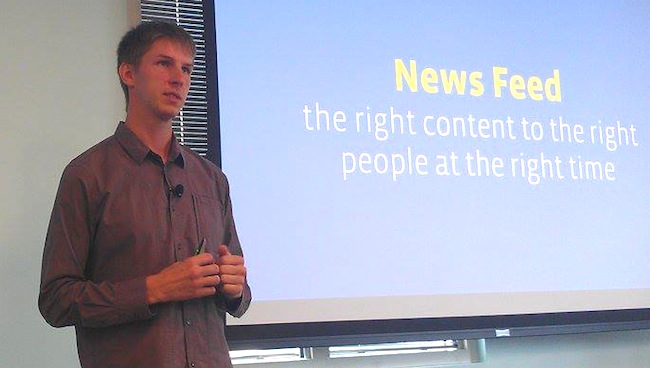 The Internet used to be a place where you could search to find what you wanted - or find unexpected things.   Today, it is more like television, where they TELL YOU what you want to see.  Could this be the death of social networking?

One of the weirdest things about Facebook - and one reason why I left - is that unlike a blog or a discussion group, what is DISPLAYED varies based on an "algorithm" than Facebook controls.

So your "wall" or whatever, has a lot of content that is not in your control (Google Plus is the same way) and what is displayed is not like a directory listing on your hard drive, but an amalgamation of stuff based on some unknown criteria.

On a regular computer - or website - when you access a directory or a discussion group, what is displayed is the content of that drive or group.   When I check my bank balance online, the bank shows me my balance - and the checks that have cleared.   I know what to expect, and can control the process.   I would shy away from a bank that shows me what they thought I need to know, and nothing more.

Social media sites, on the other hand, are more opaque.  They use "algorithms" to determine what it is you see.  And recently, Facebook tweaked its "algorithm" yet again, to control what users see - and what they do.

"Facebook has long applied a complicated algorithm to determine what you see and who sees your updates.  The algorithm is based on what the company computers think you’re likely to want to see and it’s based on several factors."

Linked-In does the same nonsense.  Even Google does it, with their search engine - which by default tries to figure out your "preferences" so you end up finding the same results, no matter what you search on.

With Social Media sites, trying to control the content on your "Wall" is like shoveling water. Or, more like trying to play chess while on acid.  You may think you are moving the Rook, but you just grabbed the Queen.  It creates a sense of disconnect - cognitive dissonance - where your actions do not produce the reactions you expect.

It is, well, disorienting, and I get seasick when on Facebook or any social networking site, as a result.  My sense of equilibrium is off.   THEY have all the control over what I see.  I have nothing!

I realized this when I went on Linked-In, trying to find an inventor.  Linked-In kept "steering" me in directions I did not want to go.  Complete your profile!  Link up with contacts from your e-mail!  Upgrade to premium membership!  "Uh, no thanks.  Just wanted to track someone down.  I'll be leaving now"  (backs slowly away, runs toward door).

This tendency to want to control their users will eventually backfire - on all social media sites.  People only like to be herded so much, before they figure out it is a scam.

The power of social networking was how people used it in unexpected ways, which is what caused it to spread, well, like a virus.   The owners of these sites now want to rein-in these tendencies, to try to steer and control the users for their own personal profit.

Just my speculation, but I don't think it will work - anymore than the GOP can take ahold of the tea-party and try to mold it to their own ends (they tried it, it didn't work, and now they have declared war on the tea-party instead).

People will eventually get tired of being a tool for Corporate America.  It takes time, but people eventually catch on.

Thanks to the helpful reader who turned me on to this YouTube video, which explains the problem:

When I go to other online sites, like discussion groups, I can see ALL of the content.  Most sites have a site map.

Facebook has an algorithm, which plays peek-a-boo with your content.  So what you see and what you post, is not all that is available to you.  It is weird and disorienting, to me at least.

I really noticed this when DELETING my Facebook content.  You delete "all" the posts on your "wall" and suddenly, new "hidden" posts Pop up.

It is like having a Nanny, filtering your content.  "Oh, no, dear, you don't want to look at THAT!"