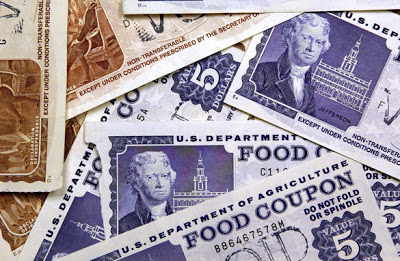 State Welfare Programs are defrauding the Federal Government in order to pay more money to their own citizens.   This is just wrong.

The new Farm bill is out, and the GOP has scored some successes.   Instead of paying farmers cash to plant crops, they will provide crop insurance instead.   This will save a lot of money, supposedly, but doesn't go as far as the GOP had wanted to go.   This is this new weird thing called "compromise" that is coming out of Washington.

But a second part of the bill is cutting out "Heat and Eat" and the media is painting this as the mean old GOP cutting benefits for people receiving "as little as $1 in heating subsidies".

As usual, the media gets it wrong.   From the way this is worded, for example, on CNN, you would think the GOP is punishing people just because they get a heating subsidy.   This is not the case.

What is actually happening is that Welfare case workers in many States, including Maine, are sending out bogus $1 or $5 checks to welfare recipients who have no heating bills at all.   By doing this, the recipient can then deduct $644 in "heating expenses" from their income, which in turn, increases their federal food stamp qualification level.

In other words, Maine Welfare case workers are cheating the system by sending out undeserved "heating assistance" checks, just so the recipients can then "deduct" nonexistant heating bills from their declared income.

As I noted in another posting, the qualification standards for food stamps are byzantine and rather arbitrary.  Theoretically, a millionaire could qualify for food stamps, as retirement savings and your home equity are not counted in the determination of "need".   In some States, your car doesn't count, either.   You could drive to the food stamp office in a Mercedes, and they can't say bubkis about it.

Now, you might argue this is right or this is wrong.   However, those are the rules promulgated by Congress.   And Congress can change the rules, if it wants to (as it proposes to do with the new farm bill).

But breaking the rules?  That doesn't strike me as right - even if a State Agency is doing it.   Who gave the authority to these States to send out "heating assistance" checks to people who pay no utility bills?   It is breaking the law plain and simple.

And the people doing it know this - as evidenced by the fact these "heating assistance" checks are just nominal amounts of $1 or $5 that are just printed so the recipient qualifies for some other government program.

That is not the way the rules are supposed to work.

And again, you can argue all day long whether food stamps (SNAP) amounts should be increased or decreased, and I have no problem with that.   That debate is healthy.   And Congress - our elected officials, hear our voices, and in theory, act on our wishes.   That is how the system is supposed to work.

On the other hand, a State official doing an end-run on the system by printing phoney "heating assistance" bills, so he can get more Federal money for his citizens, that's just illegal.   It is as wrong as, say, closing a lane of the George Washington Bridge, just on a whim.

And as a result, how much food stamp assistance you qualify for, depends on what State you live in.   If you live in one of the 15 States where they send you $1 checks for non-existent heating bills, you get more.   But then again, the qualification terms of the program vary from State to State as well - for no apparent reason.

Those mean old Republicans are proposing to eliminate this "Heat and Eat" loophole in the law.   Well, they aren't going to eliminate it, actually, but increase the amount of the bogus checks (in order to qualify) to $20 a year.   Now, the States, instead of spending a paltry $1 per welfare recipient, per year, need to spend $20.

The thinking is, most States won't be able to afford this, and thus drop the bogus heating check program entirely (in States like Maine, these bogus checks are part of a State Law!) and thus stop the practice.   However, States may up the ante by just paying the food stamp recipients the $20 (a nice yearly bonus for them) and then keeping the "loophole" in place.

What is the point of all this?   And why do 15 States do it?   The reasoning is simple:   Get as much money from Uncle Sam as you can.   The Federal Government taxes us as individuals, and then sends money to the States - usually with strings attached.   The more Federal Swag you can get for your State, the better off your State is.   You'll get new roads, bridges, fatter poor people, whatever.  It means more business, more sales, and more stuff.   And if you don't take advantage of all this Federal Swag, someone else surely will.

So our system of taxation quickly becomes a race to the bottom, where each State vies for its slice of Federal Largess, and like puppies, fight for a place at the mother teat of Uncle Sugar.