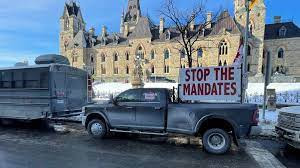 A pickup truck is not a "truck".

The Canadian "Trucker" protests are winding down, mostly because people have to go to work and no one really cares about mask and vaccine mandates.  It is all manufactured controversy and a few useful idiots being egged on by social media, funded by right-wing operatives in America and the Russian Internet Research Agency.

And the "truckers" - most don't even own a truck.  They own a pickup truck.  Real truckers know that every minute a truck sits idle is money out the door.  You get paid by the load as an owner/operator, paid by the mile as a company driver.  So if you are not driving, you are losing money. Most don't have time or money for this sort of nonsense, hence why "trucker's strikes" in America never amount to much, other than minor local disruptions on occasion.

What was interesting to me was that a lot of the "truckers" showing up weren't actually truckers, or so it appears.  They were the sort of people who buy a four-door dually Ram diesel pickup as their personal transportation (often leasing them!) to commute to work.  You can spot these sort of posers as their truck bed never gets dirty and they have some sort of half-assed four-way ball hitch on the back, which is suitable only for towing only little gay trailers and runabout boats.  These sort of trucks are just penis enlargers - part of the culture of belligerence which seems to permeate the world today, not just the USA.

Of course,we can blame the bad actors behind the scenes who are pulling the levers of social media.  People like Peter Thiel, who is sponsoring a lot of this Trumpian nonsense or Vladimir Putin, who wants to divide and distract us while he invades neighboring countries.  This riles up a lot of people, and some of them are even truckers.  But Canadians, by and large, have gone along with the pandemic "restrictions" - immunization rates are over 80% and rising, so this "protest" doesn't represent a popular uprising.

And like Antifarts before them and Qanonsense idiots storming the capitol, rioting is not protesting.  Protesting is marching with signs and shouting slogans.  It isn't blocking roads, setting fire to a McDonald's or assaulting police officers and vandalizing the Capitol.  When they started arresting these Bozos and towing their "trucks" away, most people cheered.

But it raises the question - in my mind, at least - who are these people who have so much time on their hands?  It isn't just "trucker" protesters, but the Wall Street occupiers, the Antifarts setting fire to Portland, and any other protester who has days, weeks, or even months to camp out and cause trouble.  Don't these people have jobs?

I suspect not. I suspect many of the "truckers" were these folks with pickup trucks, probably on disability for their obesity, spending all day on social media getting riled up.  Or they are folks who get so caught up in these social media rabbit-holes they forget their obligations to their family, society, and themselves.  The head of this "trucker" protest said, after one night in jail, that he "wants to go home" as jail was all mean and scary.  I mean, a Gandhi or MLK this guy isn't.  But it was the same refrain being repeated by the January 6th crowd.  They thought they were leading some great cause, but when the dust settled, they found their friends, family, employers, and customers no longer wanted anything to do with them. They lost everything they held dear - for nothing.

It is like these "Herman Cain Award" victims, who, on their deathbed, say, "shoulda got the vaccine!" but in the months prior, spent all their time on social media mocking "the sheeple" for wearing "a muzzle" and getting "the jab".

Or consider the "Pizzagate" guy who left his home, job, and family to drive to DC to free the imprisoned children in the basement of a pizza parlor.  Problem was, of course, there wasn't even a basement.  Too late, in court, he realizes he was manipulated and abused - by people on social media.

I guess these folks can't save themselves, so they engage in a hero-fantasy where they save the world.  Everyone will applaud them for their actions, in their fantasy minds, and those unseen people on Social Media (who for some reason, don't speak English very well) will applaud them for their actions.   Too late, they find out that no one will come to their rescue, and they've ruined their lives over nothing.

Consider the baby-faced kid who shot those protesters in Wisconsin.  Sure, he was acquitted on self-defense, and today the far-right is lauding him as a hero.  But where do you think his life is going in 10, 20, or 30 years when the spotlight is turned off and no one cares anymore - and people start to wonder about parents who let their kids go to protests and kids who illegally buy guns to "protect" a used car dealer?   Like Bernhard Goetz or George Zimmerman, their lives will fade to obscurity and not be enhanced, but detracted, by their actions.

Sadly, it seems this sort of thing isn't dying down just yet, but getting worse.  The culture of belligerence is turning into a culture of violence or even a death cult.  We are seeing people more willing to carry guns and use them.  People willing to beat the crap out of people they just don't like because of the color of their skin or their political beliefs or who they sleep with.  Sure, they are "isolated incidents" right now - or are they?  Assaults on Asian people are now an everyday occurrence.

What is frightening to me is that a whole generation - it seems - wants to be paid not to work.  They called it "guaranteed income" or some such bullshit.  We are seeing right now what happens when you have hoards of people with nothing to do all day long.  It is like the bread and circuses of Rome - the plebes had nothing to do all day long, so they needed to be entertained - and the government catered to them (quite literally) hoping they wouldn't revolt.  It is how a society rots from within.

Work is good for the soul and moreover it keeps people out of trouble, much as sleep keeps animals out of trouble for half the day and prevents them from being eaten by predators.  Life without work is life without meaning.  And maybe that is why these people who spend all day on social media feel the need to be a causista and be a "hero" to some stupid cause.  They desperately want their lives to have greater meaning, so they think that storming the capitol, occupying Wall Street, setting fire to Portland, or blocking the Ambassador bridge will "make a difference" and change their world.

But in each case, it hasn't.  In fact, each of these "activists" has set back whatever cause they had, through their actions.  The storming of the capitol on January 6th insured victory in Georgia for the Senate on January 7th.  No one has rallied to the causes of Antifarts or Qanonsense or whatever, as a result of these protests and criminal acts.  If anything, people have been repelled by them.

Maybe this nonsense will die down.  Perhaps Putin's invasion of Europe will unite us against a common enemy.  But not anytime soon.  Remember it was years after Hitler invaded Poland that people in the United States started to realize that fascism wasn't such a keen idea.  It may be years again, before a new generation of domestic Nazis realizes the same thing.