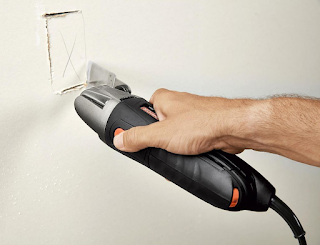 Cutting holes in sheetrock or even paneling, has never been easier.

One of the conundrums of modern home construction is how primitive and difficult our home systems are.  Wiring techniques haven't changed much in a Century - we still use the same primitive electrical outlet boxes, which for some reason are never straight or protrude from the wall at an odd angle, unless you fuss with them.  And then the archaic wire clamping mechanisms and grounding screws are an exercise in frustration.

Sheetrock is even worse.  Even "expert" sheetrock installers leave a hump or depression where the seams are, and they cast a shadow that can be seen no matter what.  It is an awkward way of finishing a wall - screwing this dusty plaster-board up and then "mudding" and taping it, sanding and sanding and hoping in vain to get it smooth (only to have it crack later on, as the house settles, or due to thermal expansion and contraction).

And cutting sheetrock - oy vae!  Sure, cutting a whole sheet is easy - you score it, you snap it.  But making a hole for an electrical outlet - a PITA of dust and frustration, if you are using a sheetrock knife.  Half the time, the knife punches through, leaving a starburst on the reverse side of the sheet.

Enter the oscillating saw.  This neat little toy has a variety of blade attachments, but the simplest one is just a 1.5" serrated blade.  When you turn it on, it oscillates a tiny bit, at a high rate of speed.  You touch it to the sheet rock and it cuts like a hot knife through butter - and leaves a clean, neat line as well.  Now you can make perfect cutouts in sheetrock without risking slicing upon your hand with a sheetrock knife, or creating an utter mess with a "sheetrock saw".

Plus, since it doesn't "ride" on the surface like a sawzall or a circular saw or a jigsaw, it doesn't leave marks all over the place, which require repainting later on.  Win-win!  You can make surgical cuts without making a mess (other than some dust to vacuum up).

Our house doesn't have return air ducts, instead relying on the hallway to return air to the central air handler.  As a result, when the blower comes on, it tends to suck doors shut - sometimes slamming them in fact - and the return airflow is limited to whatever comes through the crack at the bottom of the door. I ordered two 8x10 air registers and cut a 6x9 hole in the wall between the bedroom and the hallway.  Now, the air has somewhere to go!  No more doors slamming in the night!

The saw cut through the sheetrock just fine - and even the plywood wainscoting - leaving a neat, even line with no weird gashes or fubars.  I lucked out that there were studs on either side of the hole (A stud-finder is another nice, cheap tool to have as well!).  So the grills screw right into the wood.

I had been borrowing a friend of mine's oscillating saw, but I felt awkward asking to borrow it, time and again.  So I went out and bought one for myself.  They are only $22 or so for a consumer-grade model.  The joke is, of course, they want $7.99 apiece for the blades and even more for other attachments such as sanding triangles.

But if you are just cutting sheetrock, a blade should last a long time (they show them cutting through nails, but that dulls them pretty quickly).

Even if you are just a homeowner doing occasional sheetrock repairs, it is a nice tool to have!

I only wished they invented this darn thing a few decades ago!