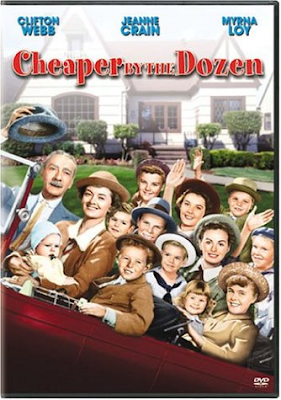 Hard to believe a guy with 12 kids pioneered the art of Industrial Engineering.
Years ago, my Grandmother taught English at the Ranney School, a private school in New Jersey.  Some of the students she taught were the children of Frank and Lillian Gilbreth, who were pioneers in the art of Industrial Engineering.  I inherited an autographed copy of the Gilbreths' book, Motion Study.   Years later, in 1950, a movie would be made of their lives based on the 1948 book written by two of their children.  The gag was that having twelve children and one bathroom, Dad had to use a stopwatch to time the children's bathroom use, and taught them how to be more efficient.  The era of the efficiency expert was born.
It was a thing, back in the early part of the last Century, and the Gilbreths were just one of many so-called "efficiency experts" who would sign lucrative consulting contracts with companies to improve their efficiency and productivity.  In the 1930's, the Japanese came over here to learn about these techniques, which they would use to great advantage long after America abandoned them.
The idea was simple.  In any task, such as on an assembly line, you would count the motions needed to do a job and try to simplify the job as much as possible.  Each motion is called a "Therblig" which is Gilbreth spelled backwards (so clever!).   For example, if a worker had to lift a part from a bin, why not eliminate that tiresome task and have the bin mounted a table height, so the parts would just fall into their hands?  To some extend, this made the worker's job easier.  But in other respects, it made it harder. The three-stopwatch clipboard was more of an artifact of Taylorism than Therbligs.
By the time I went to work for GM, the three-stopwatch clipboard had fallen out of favor.  I walked out on the factory floor with one once, and the workers almost threw rocks at me.  The Union was not amused.  You see the problem was - and is - that when you make a job more efficient, you expect more work out of the worker.  And it never ends, either.  So Suzie on the assembly line does 150 parts per hour.  You reorganize her work space to be more efficient, and she can now do 250 parts per hour.   That becomes her new quota.   The faster she works, the faster she is expected to work, until she becomes like Charlie Chaplin in Modern Times, or poor Lucy Ricardo in the chocolate factory.
Modern times are here again.
Like I said, it fell from favor.  Treating people like machines only had short-term gains.  Just because you timed Suzie doing 250 parts per hour doesn't mean she can do that for eight hours straight.  And then there are things like repetitive stress injuries - which started to become a thing just about the same time the Gilbreths' techniques were applied.  People started to consider things like quality of work life and worker comfort.  Could a padded floor mat reduce back stress?  What about a comfortable chair?  Making work easier, not faster, was stressed more in later years.
That is, until recently.   For most of the history of this country, a lot of low-wage jobs were performed for fairly small companies.  Big companies, like Ford Motor Company, with its assembly lines, could afford to institute these "Industrial Engineering" techniques to increase productivity.  But there was a cost.  Ford saw his turnover rate skyrocket as workers quit in droves, unable to keep up with the hectic pace - or at least not for the wages offered.  He doubled wages overnight, and turnover plummeted.  And no, that wasn't because of the union - there was no union at that point!   He could afford to pay more in wages because of the increase in productivity - something union members should think about when asking for a raise.
Today, though, the world's largest employers are not manufacturers but retailers and warehouses.  Walmart and Amazon are the largest employers on the planet.  And today, we have computers which can measure every aspect of a person's work life.  It started with bar code scanners at checkout.  Checkout clerks are monitored for their "scan rate" and anything below a certain level will result in them being fired.  Amazon can track employees in the warehouse, determine how long they spent on break or in the restroom, and penalize them if they are not working hard enough.  Like the checkout clerks at Walmart, they are scored on their "pick rate" and fired if they don't meet standards.  Not surprisingly, they have a lot of turnover, just as Ford did.
The problem with Industrial Engineering is that, when taken to extremes, it becomes inhuman.  The Japanese pushed worker efficiency to the limit, and as a result, there was a rash of worker suicides in the 1980s and 1990s.  Today, we see this in China, where workers throw themselves from the dormitory windows of Foxconn and other factories.  We love having our cheap stuff, but at what price?
In America, we see rumblings about unionization, but it is tough sledding so far.  The rules have been changed over the years.  "Right to work" laws mean that "Closed Shops" are a thing of the past.  In the old days, if workers voted to unionize, everyone had to join the union, if they wanted to work there.  Today, workers can opt-out, and thus have the advantage of collective bargaining without having to pay union dues.  And union dues, particularly imitation fees, can be steep.  Companies such as Amazon, Walmart, and Target are aggressive about tamping down union talk.  Employees are forced to attend hour-long meetings where slick videos are presented that all but threaten employees with termination for even talking about a union.
John Oliver parodies the union-busting videos.
And since most of the modern jobs are in retail, service, restaurants, or warehouses, the workers can ill-afford to be on strike for more than a few days at a time.  Unions are so weakened that they cannot pay much, in terms of a strike fund.  People who work at such jobs are not sophisticated and are scared.  And they are often in debt, living "paycheck to paycheck" and the thought of losing their job terrifies them.
Of course, this could all change if this labor shortage goes on for much longer.   Fear of losing your job isn't such a big thing when everyone has "help wanted" signs posted.
But frankly, these companies have brought this on themselves.  They are making record profits by squeezing their employees more and more - expecting ever-increasing efficiency and production, while wages remain flat.  The problem is, human beings can only work so hard before they break down - quite literally.
Eventually, something has to give.
Newer Post Older Post Home