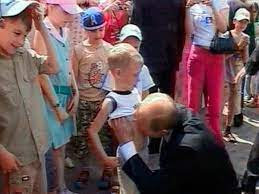 Putin spontaneously kisses a young boy on the stomach, because that is what rational world leaders do, right?

Everyone is caught up watching the war in Ukraine to the point where no one thinks - or wants to think - about where it is going.  It is weird, but Vietnam was the first televised war and perhaps Iraq the first social media war.  We get videos of battle actions as they take place, or the grisly results afterwords.  Ukraine has even set up a hotline for worried Russian parents to call, to check on the status of soldiers who have been taken captive.  Imagine that during World War II - "Honey, it's our son!  He's calling from Stalag 17!  No, operator, we don't accept collect calls!"

It is weird.  But it is interesting to see how things are playing out.  The resistance of Ukraine is admirable and Putin has united the West after spending decades trying to divide us.  Worse yet, he has exposed the Russian military as the paper tiger it is - and Russian technology as unreliable and shoddily made.  Of course, I knew this already, as I owned a Russian motorcycle, which needed my constant attention just to keep it running!  It doesn't surprise me that Russian vehicles would break down, get stuck, or be poorly maintained.

But of course, Russia hasn't really gone all-out in this war.  We may see, even later today, the use of air power and indiscriminate bombing to try to bring Ukraine to its knees.  But in a way, Putin has already blinked - offering cease-fire negotiations as the body count of dead Russian soldiers climbs.

America, other than issuing sanctions, is being pretty quiet about all of this.  After all, we can't claim the high ground after invading Iraq and Afghanistan and killing tens of thousands (if not far more) of their citizens and bombing their infrastructure to ruins.   So we keep quiet and let our European proxies do our work for us.

But where is this going?  Is this the beginning of World War Three or the end of the Putin autocracy?  There are a number of possible outcomes, but none of them are very pretty.  Some are less pretty than others.

1. World War Three: It is hard to believe that annihilation of pretty much all life on the planet would start this way.  But then again, it is possible.  Putin hasn't shown himself to be a rational actor, but rather capricious, spontaneous, crafty, calculating, and paranoid.  When you poison your opponents with Polonium, well, all bets are off.

The likely scenario for this to happen would be by accident.  Putin put Russia's nuclear arsenal on "high alert" and even with Russian technology, some missiles will get through if fired.  Meanwhile, the West is no doubt gone to Def Con Three or whatever, so everyone has a sweaty finger on the red button.  All it would take is for one false radar report or a war games simulation to be accidentally loaded into a computer, for someone to panic.  We can only hope the systems are more robust than that.

2. Limited Nuclear War: Putin might try to use battlefield nuclear weapons to start a limited nuclear war, for example, by bombing Kyiv.  While we think of nuclear weapons in terms of enormous Intercontinental Ballistic Missiles, there are much smaller munitions in everyone's arsenal.  We even had nuclear shells that can be fired from a howitzer.  We even experimented with what was little more than a nuclear hand-grenade.

The point is, you could use nuclear weapons in a limited way - to destroy just part of a city or the city center - or to get after certain leadership and command and control.  Putin might calculate that such a limited use of nuclear weapons might not result in a retaliation by the West, which would arguably trigger Armageddon.  The problem with this approach is that once one nation "gets away" with using limited nuclear war, it won't be the last time it is done.  It is a scary possibility.

3. Annexation of Donetsk and Luhansk:  This was what people were expecting all along - that Putin wanted the Russian-populated regions of Ukraine, and would "invade" those regions to support the minority Russian population.  He would use a pretext of genocide against Russians in the region (which he did) which is ridiculous on its face.  But he used similar arguments to annex Crimea, which had strategic significance and of course, the West let that slide at the time.

I am sure their negotiating position in the cease-fire talks is to allow Russia to maintain a presence in those two districts.  The idea, of course, would be to nibble away at Ukraine, much as it already has done, and has done with Georgia and Chechnya.

The problem with this approach is that by de facto declaring war on all of Ukraine, the West isn't content to look the other way this time.  Just as Hitler nibbled away at Europe, one piece at a time, eventually there reaches a point where the intent to take over is clear, and other countries band together and say, "enough is enough!"

4. Overthrow of Putin:  While there are many protests in Russia and Belarus right now, the police are beating and rounding up protesters.  Putin has created a police state, complete with an effective propaganda machine (and we know this, as he used it against us!).  It is unclear whether the Russian people are brave enough or knowledgeable enough to rally to overthrow Putin and install a new, hopefully more democratic government.

There is precedence for this of course.  After the Soviet Union's disastrous invasion of Afghanistan (you would think we would have learned from that!) the Berlin wall fell.  The occupation of Afghanistan was not popular with the Russian people and it nearly bankrupted the country.  People wanted change, and the fall of the Soviet Union ushered in that change, as well as an increase in the standard of living for the average Russian - no more waiting in lines for brown bread!

Well, thanks to years of sanctions and more recently imposed stiff sanctions, breadlines are back.  Maybe eventually even the Police will get sick of it all.

But then again, the Soviet Union fell not because of protesters or revolution, but because Gorbachev saw the writing on the wall and thought it wiser to go quietly into the night.  It is not clear to me that Putin will make such a noble gesture.  In fact, it seems like he would hang on until the bitter end.  The result could be civil war in Russia.  But then again, it is hard to gauge public opinion in Russia these days.  Sure, there are protests, but are the protesters willing to revolt?  We'll have to wait-and-see.

I wonder if a revolution or coup-d'etate did occur, it would be orchestrated by the Oligarchs who are the power-behind-the-throne.  War is one thing - if it is profitable.  But when it starts costing money, the money people may pull the plug.

6.  Putin Withdraws:  Obviously Ukraine would like to see all Russian troops gone from its territories and the war ended.  But even if Putin agrees to this - leaving all of Ukraine with his tail between his legs, what then?

Does Ukraine sue for war damages - the infrastructure, dwellings, and factories destroyed by shelling, bombs, and missiles?  What about the war dead - civilians and soldiers?  Does Russia pay reparations for their actions?

And when - if ever - do we drop sanctions?  Do we go back to "business as usual" with Russia - buying its gas and oil and pretending the bad things didn't happen or are not happening even then?   This is a tricky question and since we are all caught up in watching the war, I don't think many are contemplating this end game.

If we don't lift at least some sanctions, what carrot (or stick) do we have to offer Putin?  Why would he bother stopping the war, if we didn't at least dangle out the possibility of a return to normalcy?

There are, of course, many other scenarios and the situation is so fluid right now.  Kyiv could fall today - or tomorrow.  Or the West may be drawn directly into the conflict.  I guess what worries me right now is that we are so caught up in the visuals of war and the brave stand of the Ukrainians, that we are not thinking through where this is going.  Even if the war ended today, it is going to be very awkward moving forward, if Putin stays in power.

The only "good" scenario is if he steps down or is assassinated.  With a new government in place, Russia could return to some sense of normalcy, and once sanctions are lifted and Russia is no longer a pariah state, their economy could thrive.

Anything less than that, and, well, we are right back where we started.