The Tyranny of Outrage

After a while, outrage gets fatiguing.

Going online these days is sort of a waste of time.  No matter whether you are looking at cute cat videos, or listening to alt-right propaganda, or even reading or watching the "mainstream media" the secret sauce these days - which is not so much a secret - is to stoke outrage.

A lady (and I use that term loosely, and I am sure she is used that way as well) goes "viral" for assaulting a Uber driver for asking her to wear a mask.  Funny thing, assaulting livery drivers is a felony and she is in a lot of trouble.  But if you look at her YouTube or Tick-Tock history (I didn't!), well, you see a number of outrages, including her driving 122 miles an hour while holding a cell phone so she could record herself breaking the law.  Her career consists of being a garbage human being - and we all sit in the front row with a big bowl of popcorn to watch.

No one makes money on the Internet by being a nice guy, unless they are staging a "heartwarming" video by giving a homeless guy $20 while filming themselves doing it.

Of course, outrage baiting goes back before the days of the Internet.  And by the way, I read a funny comment online the other day, from someone who said, "Gee, the Internet has only been around for a decade or so, and already it has gone to shit!"   A decade?  Geez, I remember flame-wars on dot-matrix terminals (CRTs?  Don't get fancy!) on forums like "alt.star-trek" back in the 1980s.   Kids these days.

One of the pioneers of outrage media was, of course, Howard Stern.  His schitck could be traced back to the antics of Hedda Hopper, Louella Parsons, Charles Coughlin, or Walter Winchell.  Even newspapers back in the early part of the last century made coin by being outrageous.  If you want to trace it back even further, I suppose the pamphleteers of the revolutionary war weren't exactly subtle.

In Howard Stern's movie "Private Parts" there is a line that illustrates how this works. The station manager is reading the latest A.C. Nielsen ratings and says :

"50% of listeners HATE Howard Stern and listen for an average of 2.5 hours. Reason given? They want to hear what he'll say next!"

People took notice.  Before long, every local market had its own version of the "Morning Zoo Crew!" or licensed a franchised version of it.   The formula was simple - dumb it down, a lot.   Fart jokes, sex jokes, lesbian jokes - you-name-it.  The more outrageous, the better.  And if you went over the edge and created a controversy, so much the better.  You can't buy publicity like that, and as they say, there is no such thing as bad publicity.

The latest outrage-du-jour is actually a sheaf of commentators who are doing everything from anti-vaxxing to conspiracy mongering.  Whatever creates controversy and generates clicks, they say it, even if they are vaccinated themselves or don't actually believe the Earth is flat.  And there are a host of useful idiots out there who will pretend to go along with it so they can get attention from their friends.  As any lonely kid knows, even negative attention is better than no attention, and today most adults are just big goofy kids.

Folks like Joe Rogain don't worry about negative publicity or being taken "off the air" (is a podcast airtime?  Just asking - I never listen to them).  He has an $100 million dollar contract and collects, no doubt, whether he is cancelled or on the air.  And no doubt his ratings have gone up as a result of this recent "controversy" which itself is manufactured, as people like Rogain say outrageous things just to get ratings. 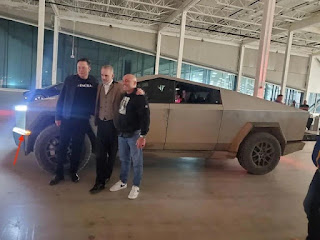 The photo above is interesting in that all three individuals use outrage on the Internet via their Tweets and whatnot, to generate "news" and controversy.  Musk was once the darling of the eco-Left with his electric cars and solar panels.  Lately, though, he has gone far-right with his stances on things like unionizing, worker's rights, and of course, tax rates for billionaires.  I have to wonder how that is going to work out for his company.  The Prius crowd will not be amused.

So maybe there is an end game to outrage media.  After all, who listens to Howard Stern anymore?  I wonder if he regrets signing with Sirius XM, which is an obsolete format.  Then again, he's probably obsolete by now, too.

But more likely the end game is for the listener, not the radio personality.  Eventually, we all have to grow up - or at least most of us do.  It gets pretty embarrassing if you are 40 years old and you tell people about your favorite drive-time shock DJ or your favorite "reality" television show.  It kind of marks you as a boob.  And if you are working on the loading dock, I guess no one cares.  But in the boardroom, it is another matter - or even if you just want to get there.

Another generation of outrage media consumers is always on the horizon.  Junior high school boys will always find that sort of thing intriguing.  The aging demographic of the country should worry the shock jocks of today, though.