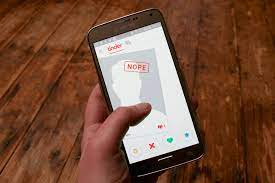 Constantly rejecting things is a sure sign of depression.  Fortunately, the solution is easy. Just say "Yes!" instead of "No!"

I have a friend who is single and is on all those dating sites - you know, Tinder or Grindr or whatever.  He puts up a "profile" using a stock photo as well as a description of himself that doesn't resemble him at all.  They he enjoys showing me the responses he gets from people wanting a date.  "Look at this one! Such a loser!  Swipe Left!"

The problem is, he has never swiped right on anyone in his whole life.  Or, if he does, he engages in these long chat strings, which he then shows me, mocking the person who is texting him.  "What a loser!  I'm going to block him!  Hee-Hee!"

What is the point of going on a dating site if your only intention is to mock others and reject them, in order to feel better about yourself?  It is a dead-end game.  But a lot of people play it.

Back in the day, when I went to bars - straight singles bars and later in life, gay bars, it seemed that there was always a small group of people who went to such places - male or female - not to "hook up" or find a boyfriend or girlfriend, but to just reject everyone as not being good enough for them.  You can spot them, too, as if they were checking out the crowd and saying, "Not You! Not You! Not You!  Certainly Not You! Ugh!"

What was funny about those people was that they themselves were nothing to write home about, with flaws of their own, either physical or mental.  The latter probably explains the behavior - these are depressed people and they make themselves feel better about themselves by rejecting others. But it is a dead-end game.  In the end, you end up alone at the end of the day, which leads to even more depression, and the cycle continues.

My friend who was on the dating site showed me one "hit" he got, and said, "Can you believe this, he wants to meet me for drinks!"  He giggled as he said this, as if meeting someone for a drink was some weird thing and not how human beings have met each other for the last century or so.

"What?" he replied, "you don't actually meet those people!" he replied.

"Guess what?  Your'e one of 'those people' yourself!" I retorted, "What's the ever-loving point of going on these dating sites, just to reject people?  If you see someone who is interested, check them out.  Worse thing that could happen is you waste a half-hour of your life, and it's not like you have a hectic social calendar!"

Well, he decided to swipe right or whatever and it turned out - surprise, surprise - that "the guy was not a total freak!  In fact, he was kind of nice!"

And they went on a second date and the rest of course, is history.

Mark and I have been together for going on 35 years, which among the gays is considered splitting the atom.  And at first, I didn't think much of him.  I thought he was older (most people do) and he seemed to have his shit together and not need someone like me.  But we stuck around for that second date, and then a third.

Actually, I cheated.  I had one of those Casio calculator watches (it was the 1980's) that beeped every 15 minutes, and I left it at his apartment.  It wouldn't stop beeping and at 2AM he dug my phone number out of the trash, asking me how to shut the fucking thing off.  So I went back the next day to retrieve the watch - and the rest is history.  It's all about the second date.

Perhaps there are some folks who are happier alone and destined to be alone.  There are also folks scarred by bad and abusive relationships, who are happier by themselves rather than being abused.  I get that - you get burned once, you don't want to get burned again.

But there are others, I think, who are unhappy and lonely, and it reaches a point where they are so lonely it bootstraps itself into more loneliness, as they become depressed and only get joy from rejecting others.  It becomes a death spiral, as no one is "good enough" and the person ends up old, sad, and lonely.

Sometimes, it is OK to just say "YES" and try new things.  And this applies to things other than your love life or relationships.  It also is OK to say "YES" to new foods you've never tried before - or rejected in the past.  OK to say "YES" to a new job offer or career opportunity.  You'd be surprised how many people don't answer the door when opportunity knocks!  We trade risk for comfort - and expect the world to be brought to our door.

Of course, this doesn't mean to date a serial killer or to sign up for an MLM scheme. That's not what I am talking about - blind faith and ignoring warning signs.  It is just that some folks are quite the opposite of that - rejecting everything for not being good enough, or because it takes them outside of their comfort zone.