How Social Media Brings Out the Worst in US! 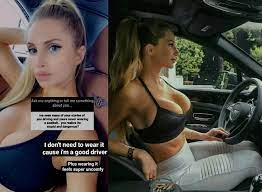 You don't get clicks on social media by being nice.

It seems everything is awful these days - if you listen to the media or to social media. People are doing horrific things and getting away with it, or so it seems.  Why aren't people being nice to one another?  What happened to our civilization?

Well, what happened was us - people that is.  Human beings and their lowest forms of behavior and their worst impulses. I am not talking about them but you and me.

For example, I saw something online about a "Tik-Tok" influencer, who was an "attractive" young lady with a boob job, an ass job, and botox on her lips.  She was shown in her car, saying, "I don't have to wear a seatbelt, because I'm a good driver!"   It was a troll, and people fell for it.  I fell for it - by clicking on a Reddit link - and then I realized that all the crap on Reddit was just click-bait and nothing more.

Like clockwork, there were comments about how seatbelts are for everyone and how this lady was being irresponsible for claiming otherwise and so on and so forth.  But that wasn't the point.  The point is, she got a lot of people to click on her video by saying something outrageous.  And when people commented on the video, well, that just upped her numbers in social media world, as it represented "engagement" by viewers.

That is the problem with social media - it brings out the worst in all of us, and we are easily triggered by people claiming outlandish things, like the earth is flat.  Does anyone really believe that?  I doubt it.  I think it was just a way of getting attention - generating clicks - and getting people to engage, which means you make money from your sidebar ads or by becoming an "influencer" and hawking products on the side.  Although for the life of me, I am not sure what advertiser is targeting the flat-earth demographic.

That is, in part, the other half of the problem.  Despite the vaunted "AI" that everyone talks about, the cold hard truth of social media is that these algorithms (and that is all they are, algorithms) are quite primitive, perhaps by design.  In the early days of Facebook, the advertisements were for the shittiest of deals - crappy refinancing offers with weird Pavlovian response graphics.  What's worse, is when Facebook started getting serious advertisers (car companies, consumer products, etc.) they were often chagrined to see their ads were linked to odious pages and sites for white supremacists and nazis and whatnot.

So they created primitive algorithms to fix this.  When I monetized my blog as an experiment, I could click on ad categories that I didn't want on my page - adult sex sites, gambling sites, and so forth.  But if I did an article about how payday loans were an utter scam, the accompanying side-bar ad would be for.... payday loans.

Social media doesn't filter content and ads very much because, if the did, they would lose ad revenue.  So like clockwork, you see ads from major corporations appearing on odious sites, as they were placed by an ad buyer who bought placement in bulk.  The corporation has to do a mea culpa and withdraw their ads from Infowars or whatever, and as a result is charged with "Censorship" because as we all know, the first amendment requires you advertise on nazi websites.  The founding fathers foresaw this!

But speaking of nazis, I recall back when I was a kid, there was always "that guy" (sometimes my brother) who would scrawl a swastika (often backwards) on a fence post or bathroom wall.  If they got caught at it (which they did, a lot, which I think was the point) parents and adults would be horrified.  After all, their generation had just fought the nazzies and the horrors of the holocaust were recent memories.  But to a kid who wanted to get attention, it was the button to press.

Today, we have grown-up kids who still like to press buttons, to "own the libs" by chanting "OK Brandon!" or whatever and then getting increasingly frustrated when no one clutches their pearls.   So they resort to greater and greater rhetoric and nonsense, such as white supremacy or anti-vaxxing.  And that gets them noticed, like that 5-year-old boy scrawling swastikas on the fence in 1963.  It is childish behavior, to be sure, but then again, we have all devolved into big goofy kids.

Sadly, this sort of nonsense has been going on a long time.  Remember the "Tide Pod Challenge?" - trying to get people to eat laundry detergent.  It was designed to generate outrage and get people to put up comments like, "Uh, that's probably a bad idea!"   And the trolls would laugh because of course it was a bad idea but somehow it was "funny" that you pointed that out.  But the main thing is, they generated clicks.

As I noted in an earlier posting, any Social Media web designer or coder should start off with the premise that people will do the most awful things on their sites and should not be surprised by that but rather anticipate it.   This goes back long before Social Media, too.  Trolls and Flame Wars existed back in the days of dial-up service and text-only "newsgroups" (remember back then when it took hours to download an image - often in several parts that had to be assembled?).  It is part and parcel of the Internet and cannot be fixed because the people running these sites don't want it fixed.  And they don't want it fixed because without it, they have no viable business model.

Social media is one helluva drug as some wag once noted.  It gives you little jots of dopamine when you "find" a cute cat video or someone "likes" or comments on your post or whatever.  You keep going back to the well, hoping to revisit that high, but find the reward increasingly scarce - classic Skinner box.  So you keep clicking and keep scrolling and keep swiping, hoping this time for sure you will score.  Before long you become "that guy" who is always looking at his phone.

We all are susceptible to this, too.  And that is the subject of my next posting - unplugging from screen time.