Anatomy of a Come-On 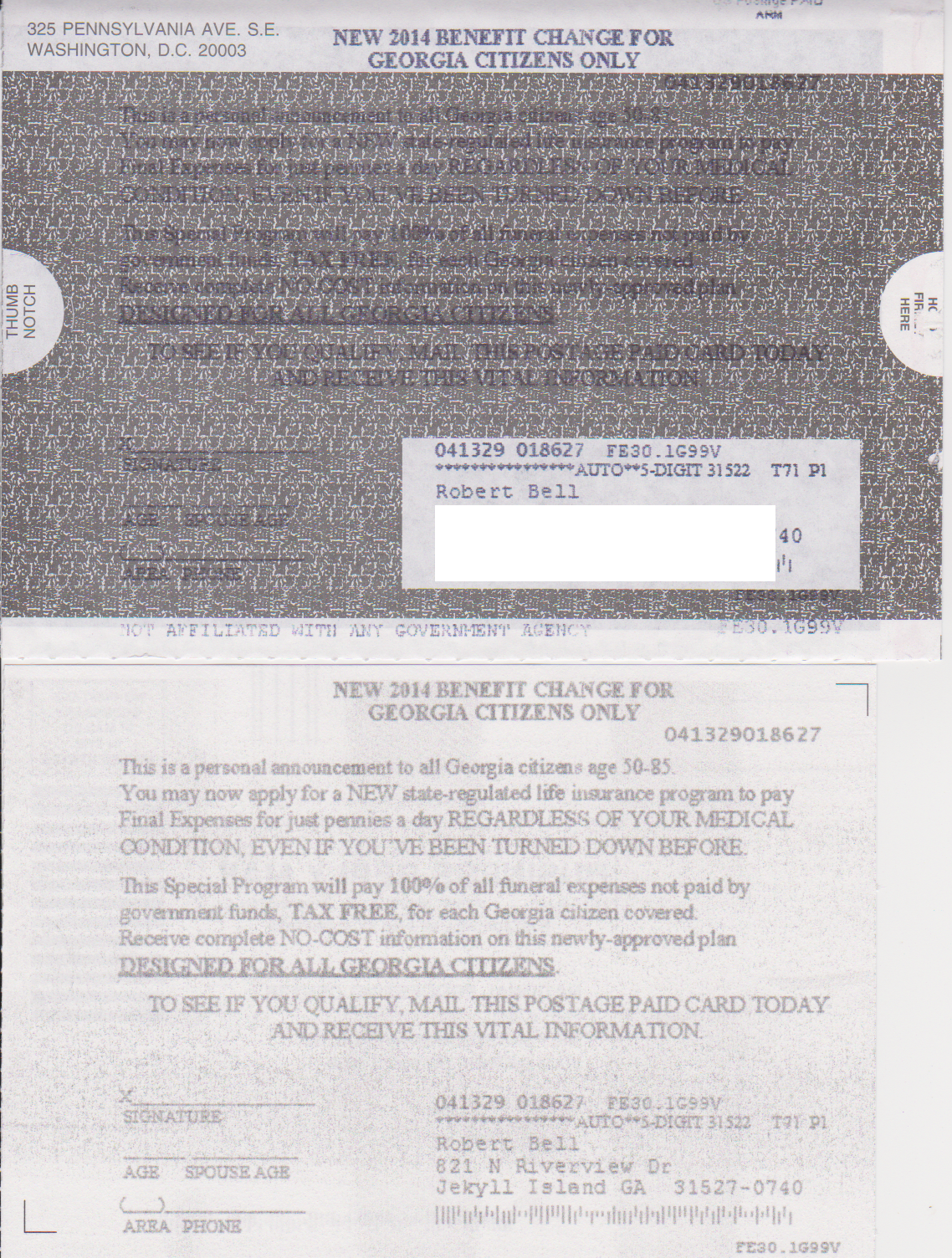 In today's junk mail a weird envelope faked-up to look like something the government would send out, complete with a "Pennsylvania Avenue" address (325 Pennsylvania Ave, SE), which according to Google Maps is a smoothie shop and a "Kay Wigs" store.

What is it?  A come-on for burial insurance.    Burial insurance, like Life Insurance for Seniors is just a bad bargain.   You get a pitiful amount of coverage and the money spent on premiums would be better spent by putting it in the bank.

Read the come-on carefully.   They chose words to sound like this is a government program, but not actually say it is.  For example, "You may now apply for a NEW state-regulated life insurance program.." seems to imply that this is something the State of Georgia is doing (the name "Georgia" or "Georgia Citizens" appears several times).   But of course, all life insurance is "state-regulated".

Folks getting this mailing might be lead to believe that this is yet another example of some handout from the government, perhaps from Obama himself.   And the targeted area, a retirement island, insures there will be some easy pickings.

Of course, if you look at the very bottom of the envelope, you see the disclaimer, "not affiliated with any government agency" - they KNOW their envelope is faked up to look like a government mailing, so they put the disclaimer on, to try to avoid the wrath of Uncle Sam and the Federal Trade Commission (who are so weak, they couldn't pull a hobo off your sister!).

So who is sending out this junk?   Ahhhh.... there is the second clue.   The return postcard says only "National Processing Center" which again sounds government-ese but really doesn't mean anything.

Would you buy life insurance from a company that won't even tell you its name?   Of course not.   But what they are counting on is that the recipients of this junk mail believe it to be from the government itself.

Do people fall for this stuff?   All the time.

"But," you say, "I'm smarter than that!  Anyone could see this is junk mail!"

You think so?  I've seen college graduates fall for schemes like this - even PhD's.

Another outfit sends out "Patent Renewal Notices" to people, using a similar post-card device.  The post card, which looks sort of official (from "The Official Patent Renewal Services" or some such nonsense) says that the recipient needs to send them $125 to renew their Patent.

Well, that is what people think it says, when they read it quickly and rush for their checkbook.   What it actually says is that they will agree to send them the renewal form, which is a free form that can be downloaded from the Patent Office website.   And actually, you can just go there and pay the fees (which are far more than $125) with a credit card.

A few years back, I reminded a client - a PhD., no less - about his upcoming $480 maintenance fee.    He got very annoyed, and accused me of trying to cheat him, as he said, "I got the official notice from the Patent Office directly, and the fee is only $125!"

And yes, he sent them a check for that amount, and no, there is no way to "get your money back" realistically.

So, how to you avoid these kind of scams?   Well, you have to read carefully.   And that means that a whole lot of our population will be scammed, as many people really cannot read very well.

It also means, that as you get older, more infirm, and your eyesight and brainpower diminish, you will become more susceptible to these scams, particularly as they get more and more sophisticated in nature and appearance.

But as a general rule, any unsolicited mailing should go right in the trash.

Faking up a mailing to look like it is from the government or your credit card is a small deceit, and deceitful people show their hands early.   The relationship will not go uphill from there.   There are no bargains to be had.

So, what do you do with this card?   You can throw it away.  Or you can fill out a fictitious name and put in the phone number of the Westboro Baptist Church, I suppose - and mail it back to them.   But that would be wrong, of course.