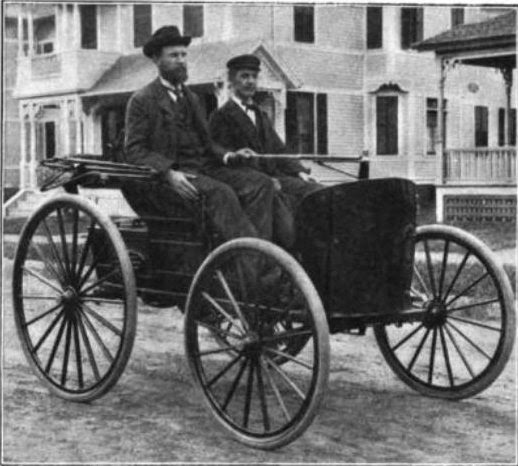 Long before Henry Ford, the Duryea Brothers built the first Automobile in America.

If you ask someone who invented the automobile, most folks, particularly children, will say "Henry Ford".   Some sharper folks might say Diamler or Benz, realizing that the automobile was first invented in Europe.

But more than a decade before Henry Ford brought out the Model T, the Duryea Brothers built their first car.

What happened to the Duryea Brothers?  Why are we not driving around today in snazzy new Duryea automobiles?   The answer is complex, but it is a classic illustration of how emerging technology works, and why "first to market" is often last in the marketplace.

In any emerging market, there are usually a number of steps which occur, in a classic pattern:

1.  One inventor or company comes up with a new idea and starts marketing early, primitive (and expensive) versions of the device or system.

2.  Others jump into the business, and a feeding frenzy starts, as investors clamor to get in on "the next big thing."    Most of these people lose their shirts.   A few, later on in life, will regale you about how they had the opportunity to "get in on the ground floor" but chose the wrong company or wrong technology.

3.  People file for Patents.   Someone who has no real participation in the industry gets a broad Patent and sues everyone else.   The other manufacturers band together to fight these Patent Trolls (yes, even in 1908, we had Patent Trolls).

4.  The original inventor or company that came up with the idea hardly makes any money, goes bankrupt, or just leaves the business.   The inventor usually sells off 95% of the business just to raise capital, and often he loses even what little he has left.

5.  The business matures, and one player - often the last in the game - buys up the tattered remnants of the failing pioneers, and becomes dominant in the industry.

It doesn't matter whether it is the telephone, the airplane, the automobile, the personal computer, or 3-D printing.   The pattern is the same, again and again.   First to market is often last in the marketplace.   And while inventors dream of riches from their inventions, sadly, they are rarely realized, or if they are, they are a pittance compared to the overall profits made by mere speculators.

The Duryea Brothers are a case in point.  Charles was more of a promoter and claimed to be an "Engineer."   Frank was more of the machinist and mechanic, and really put together the first working car.   Their first investor in the business kept pouring money into it, and then exasperated, pulled out of the deal, just before they met their first success.   This is also part of the pattern.

The two brothers split up, and Frank, in later years, would denigrate his brother's participation in the invention of the Automobile in the US.   Stevens-Duryea would be formed, headed by Charles, and make a fine line of heavy automobiles, for a few short years, costing thousands of dollars apiece.   Frank went on to make a primitive buggy-style auto, long after manufacturers had adopted modern innovations like steering wheels.

Visionary or nutjob, Frank thought that there would be a demand for a "simple" less complex and more reliable automobile based on the gas-buggies of the early years.   He sort of had the right idea, but the wrong way of implementing it.   Buyers wanted a "real" car - but for less money.  Henry Ford stepped in and made Duryea's dream a reality.

Both Duryea brothers left the auto business.   In a speech given in 1946, Frank states that he had no regrets about leaving the business, and the overall tone of his speech was a little bitter, particularly toward his own brother.

So what is the point of all this - with regard to personal finances?

The point is, trying to pick winners in emerging markets is a real crap-shoot.    In 1902, no one would have foreseen the automobile marketplace settling down into a "big 3" of Ford, GM, and Chrysler, within 30 years.   Dozens, if not hundreds of wanna-be carmakers got into the fray, coming and going with regularity.   Picking the winner from this herd would be difficult, if not impossible.

It took no brains back then to see that the concept of the automobile was a winner.   What is hard to do is pick which company would end up the winner.

The media loves to hype new technology stocks - and Motley Fool, for example, likes to hype things like 3-D printing.  Will 3-D printing be "the next big thing"?   Maybe.   More likely it will be a thing - and hardly the "game changer than will put China out of business!" - particularly when the machines themselves are made in China.

But even assuming it is "The Next Big Thing!!!!" (with lots of exclamation points) - which company do you invest in?   Who is the Duryea, and who is the Ford or General Motors?    And even if you pick the General Motors of 3-D printing, you have to recall that early on, GM nearly went bankrupt (it would take another 90 years for actual bankruptcy).  If you bought GM stock early on, you went for quite a roller-coaster ride during the Durant years.

Picking winners is a tough business.   About the only thing you can say is that the first to market is not going to be first in the marketplace.   Apple was first with its iPhone - but Droid phones have twice the market share of Apple products.   Will Apple end up the winner?   It would appear that they are already falling behind - selling the equivalent of a $9000 Duryea when the competition is cranking out cheap Model-Ts.

We like to think that we live in a "new economy" and that by putting "cyber" or "i-" or "e-"in front of something, it somehow behaves differently than in the economy of the past.   And this is literally true - before the first "dot com" meltdown, wily young entrepreneurs were saying things like "profits are a thing of the past in the new e-commerce economy!!"

That turned out not to be true.   In fact, the pattern of the dot com era pretty much followed that of the gaslight buggy era, the airplane era, and the computer era.   A lot of people rushed into the business, few succeeded, and the pioneers were usually the first to be cast by the wayside.
Newer Post Older Post Home