Shaddap and Vote for Hillary! 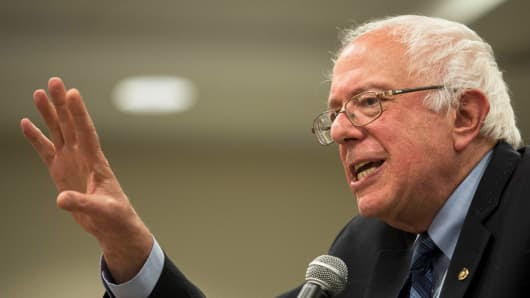 A protest vote for a long-shot candidate is a really, really bad idea.


There is an election coming up, and while it may seem like a joke at this point, it is kind of important.  In fact it is very important, perhaps the most important election of the last 50 years.   Yes, even more important that getting Barack Obama elected.  For many of you, this may be the first time you vote, or the first time you vote in a Presidential election.   And it may be tempting to say, "Gee, I should vote for Bernie Sanders, because he represents exactly what I believe in!"   But that would be a grave, grave mistake.

You see, there are a lot of serious issues on the table today.   We have Obamacare, which has a lot of problems and the Republicans would like to just toss out.  If a Republican wins the White House - and they take the Senate, you can kiss your healthcare goodbye.

But there are other things as well.

I am sure you are all psyched about legalized marijuana.   And I'm happy for you.   But you see, it is still illegal at the Federal level, and the DEA is frothing at the bit to take down all those medical and recreational marijuana dispensaries.   What is holding them back?  A Democrat in the White House.  If a Republican is elected, the Feds will close down all the marijuana dispensaries - recreational and medical - put every one who owns one or who worked in one in jail, for a very long time, and then seize all the assets of these businesses and shut them down for good.

Do you want that to happen?  Of course not.

But wait, it gets worse.   Remember that consumer protection agency that Obama pushed through?  The Republicans will abolish that first thing - as they have promised to do.  They want banks to offer you crummy credit deals on onerous terms.   But you know that, right?

And your student loans?  Well, if there is any hope for Student Loan reform, it ain't gonna happen with President Cruz in the White House.

Now, I know what you are going to say, "President Sanders will fix all of those things!"   And if he was elected, yes, you would be right.   But let me tell you something that is 100% honest truth:  America is not going to elect a Socialist from Vermont as President.   Not today, not in my lifetime, not in yours, either.

It is a nice fantasy, but it ain't gonna happen.   Let's be realistic here.

Oh, wait - you really think a majority of Americans will vote for a Socialist?   You need to get out more.  You see, the far rightwing nutjobs in this country are a minority - as is the far left.  The majority of people in the USA are middle-class and middle-of-the-road.  They don't want to rock the boat that much.  They vote for the candidate who seems the least extreme.

I had friends who voted for Bush - twice.   When I asked them if they were voting for John McCain, they said, "Hell, no!" and the reason why was Sarah Palin.   They voted for Obama not because they were Democrats or Liberals.  They voted for Obama because he seemed a lot more rational and middle-of-the-road than the crazy show at the McCain/Palin camp.

If the choice was Saunders or Jeb Bush, I can guarantee you my friends (and the majority of Americans) would vote for Bush.   He seems more middle of the road in comparison.   But if the choice was Hillary or Bush, she would likely win.   You can decry this as "unfair" and all, but it is the honest truth, and the polls back this up.   And no, the polls are not wrong in this regard.  Sanders has no hope of being elected President.  The most he could hope for is to run as VP and then hope....... well you know.

What could happen, though - and has happened in the past - is that Sanders could run as an "independent" (indeed, he is registered as such) and act as a "spoiler" and allow a Republican (likely Jeb Bush) to be elected.   Yes, Jeb will get the nomination, once GOP silly season is over.  You can bank on that.

You see, there is huge precedent for this.   Bill Clinton was elected, not because he beat George Bush by a popular vote, but because a fellow named Ross Perot ran as a third party candidate and siphoned off enough GOP votes to allow Clinton to take many key States.   Third Party candidates just act as spoilers.

That was probably before you were born.  But you may remember the Bush v. Gore election and the debacle in Florida back in 2000.   Some folks say the Supreme Court messed that up.  Others say Dick Cheney and his minions were at work.   The God's honest truth is, though, that a third party candidate named Ralph Nader is to blame.   If all the Nader voters in Florida voted for Gore, he would have won that State, and won the election.

And then we would not have invaded Iraq, and ISIS likely would not even exist.  Hell, 9/11 might not even have happened, if Gore was at the helm.   We'll never know.

But some folks thought, seriously, that a guy who wrote a book about cars was qualified to be President of the United States.   Why did they think this?  They were young.  They were naive.  They though they should vote for the candidate who thought what they did, rather than the best candidate who had a chance of winning.

It takes political maturity to realize that there is no such thing as a "perfect candidate" unless you yourself are running.   Is Hillary perfect?  Hell, no.   She has some personality issues.   She's done a lot of weird things over the years.   And we know about this because she has lived almost her entire life in the media spotlight and in public service.    Do I agree with everything she says?   Hell, no.   But I agree with her a lot more than I do with Donald Trump or any of the other 12 munchkins the GOP is touting for the office - some of them having never served in public office.

So yea, Bernie Sanders is a nice guy and all.  And he believes in what he believes in.   But the majority of Americans aren't going to vote for him - just accept that and move on.   If he runs as an independent, it could mean a disaster for Hillary.   And that would be a disaster for your legalized marijuana, your medical care, your student loans - a whole host of things.

Oh, yea, the protest vote.   You're going to vote for Bernie Sanders as a "protest" to "show those fat cats how we really feel!"   And they will chuckle, as your 3% of ballots cast force Hillary to lose Florida and a couple of other swing States.   But no, they won't be shaking in their boots over your protest vote.  Grow the fuck up, for chrissakes!  Protest votes are for losers.

Now, on the other hand, if Donald Trump decides to run as an independent, that would be really, really sweet.   Because the far-right nutjobs would vote for him and take away enough votes from Jeb Bush so that he would lose Florida and a couple of other important swing States - insuring a Hillary victory.  Let's just hope that happens.

There is a LOT riding on this next election.  Don't fuck it up by being an idiot.  And I say this because we see what is going on, on college campuses today with these idiotic protests and "safe space" nonsense.   It seems plausible that a lot of you might be tempted to vote for Bernie Saunders.   Not only will you be throwing your vote away, you'll be insuring a GOP victory - and a lot of what you have fought for in the last eight years will be swept away in a matter of months.  And I am not kidding about any of this in the least.

Yea, I know this.  Because when I was your age I was an idiot, too.  I voted for John Anderson.  What the fuck was I thinking?   I wasn't!   Reagan would have won without Anderson as a spoiler candidate.   However, Carter would have taken quite a few more States, had Anderson been out of the picture.  It would have been a much closer race, rather than a landslide for Reagan.


EDIT:  It might not be Jeb Bush.  It could be Rubio.   Is there really a difference?  Of course not.