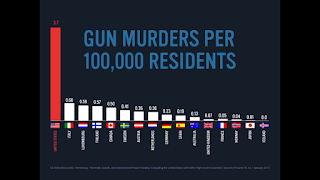 This chart makes the USA look like an abattoir of gun violence.   But is it true?


I am not a big fan of guns.   Not because I am anti-gun, only that they are really, really expensive, and if you buy one, not only are you throwing away hundreds or sometimes thousands of dollars, you are buying a product you will never likely use, and if you do use it, you will likely regret it.

It is like bear-spray.  We were in Canada and everyone asked about bear-spray.  At the border, they asked if we had any (no) as it is illegal to bring it in.   Illegal, because Canadians want to sell it to you for like $60.  It looks like a fire extinguisher and comes with a little holster for your belt.  I know this, because someone gave us one, as you can't take it with you on the airplane when you leave (we drove, so it was not an issue).   So they sell this useless bear spray and then you throw it away after a week in the Canadian Rockies.

The second problem is, if you do encounter a bear, you may not have time to unholster your spray, carefully remove the safety, point and shoot and hit.   Usually bear encounters are so sudden that you have no time to react.  You surprise the bear (or vice-versa) and things happen very quickly.

Owning a gun is the same deal.   You have to have it with you all the time because the first time you leave it at home, or locked in your car, will be the time you get robbed at gunpoint.   And of course, even if you have your gun with you, and someone sticks a gun in your face, the odds of you winning the resulting shootout are 50/50 at best - they have the draw on you.

Again, it is parachute theory at work.   It would be nice to wear a parachute at all times, as if you were stuck in a burning high-rise building, you could jump to safety.  Or if you fell from the rim of the Grand Canyon, you could pull the ripcord.  Or if you were in an airplane crash, you could jump out and be safe.   These are all far-fetched long-odds things to happen.   Even Policemen rarely draw their guns.   An overwhelming majority never unholster their weapons throughout their entire careers as cops.   What are the odds you will need yours?  Pretty slim.

And just like the parachute, if it goes off at the wrong time (riding a motorcycle for example) the consequences can be disastrous.   So I just don't see the cost-benefit on this.   The odds of needing a gun are so long, it isn't funny.   And the cost is pretty staggering.  And the precautions you have to take and the permitting and whatnot (even in gun-happy USA) is a real hassle.   And of course, they are, oddly enough, a criminal attractant.   One thing every burglar hopes to steal from your home is a gun - they are readily fence-able and highly coveted on the street.  Owning guns doesn't deter burglary - it attracts it.

But this is a personal decision, and here in the USA you can buy a gun fairly easily.  And it is a political issue as well, with folks on both sides of the debate frothing at the mouth.   And charts like the one above are used to show that we are a bloodthirsty nation.   But are we?

The problem with the chart above is what is called a lie by omission.   It isn't listing the top countries for gun violence, showing the USA as some sort of freak anomaly with gun crime more than four or five times the next highest country (Italy).  It is comparing gun violence in "wealthy countries" only, not to all the countries in the world.   As Snopes pointed out, there are many other countries with far higher death rates than ours, and many other countries with similar death rates.

This Wikipedia entry, for example is less deceiving.  The interactive chart allows you to sort by death rate, country name or whatever.  By that standard, we are 13th in the world, between Mexico and Montenegro (really?).   The data also shows that the data on the chart above is either outdated, forged, or just plain wrong.  Finland is not a 0.57 but at 3.64, and that is a huge difference.  In fact, none of the data on the chart above is even nearly correct.  All the "wealthy" countries shown, besides the United States, are all over 1.0 in reality (and some much higher).

In other words, it is a made-up bullshit chart from the Bureau of Specious Statistics.

And this is sad, too, as the debate over gun violence is an important one.   But if either side resorts to faked-up data, it discredits their own arguments.   Sadly, both sides do this.

So what are the safest countries in terms of firearms deaths?  Japan, South Korea, Azerbaijan, and Hong Kong.

But of course, even this data on Wikipedia could be suspect - the page could be edited by anyone at will.  Moreover, cultural bias in reporting data can skew numbers.   For example, if you sort by suicide rate, the US drops way down the list - below the UK even!   But it is possible that suicide numbers are skewed due to social issues - embarrassment to family members, for example.   Many suicides are reported as "accidental deaths" to spare families pain and to allow them to collect insurance benefits.

But clearly the chart above is just crap.   Even the people who created it admit that is based on older data and compared only "wealthy" countries (an interesting metric) and thus generates a biased conclusion.

But of course, since it was posted on Facebook, it must automatically be true, right?