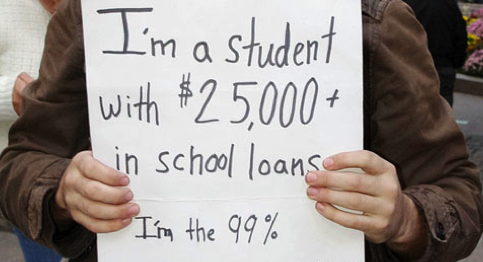 The kids protesting today sometimes seem a little ridiculous.   But at that age, we all had pretty silly and naive notions.   Most of us give these notions up over time.


To some folks today, the protests going on at college campuses or at Wall Street seem pretty idiotic.  And for the most part they are.   For example, white students, after taking a course in "whiteness" (which surely leads to some sort of career position) decided to hold a "black lives matter" rally - without actually consulting any real black people first.   Apparently they didn't learn much from their course material.  But no doubt, "trigger words" kept them out of the classroom most of the semester.

Others are making an ass of themselves by complaining that the attacks in Paris (where people are actually dying, instead of being emotionally offended) are upstaging their protests.  There is something somewhat obscene in that.   Still others are clinging to the "KKK invading Mizzou" story line, even after the Student Body President who spread the rumor admitted it was false.

And of course, Wall Street protesters are protesting the fact they have to pay back loans they took out as adults, for educations that turned out to be worthless (but they won't admit that).   From their perspective, they are owed a job by dint of going to college, and loans should be forgiven, because no one on the other end of the transaction will lose money.  Some students are actually protesting to have all student loans forgiven and to have college made free for all.   Who would pay the staggering cost of all of this is unknown.   Hard to believe that you can go to college and still be that dumb.   Maybe not so hard to believe if you can take a course in "whiteness".

To some older folks, these "outrages" they are protesting may seem a bit silly.  After all, in the 1950's and 1960's, people were protesting things like lynchings, segregation, the right to vote, and a war that was actually killing people.   Today, the most serious offense that could be protested is some police shootings which occur either in somewhat ambiguous circumstances - or circumstances that turn out to be clearly justified (but no one wants to admit that).

Kids today are protesting for "safe space" on campus - where people are forbidden to say anything deemed offensive.  They protest Halloween costumes or anonymous graffiti.   They are protesting for the right for free speech for some, and the right to restrict speech of others.  To an adult, it all sounds pretty crazy - until you realize that at that age, you yourself held similar opinions.

Yes, when I was in 7th grade, I thought Socialism was a great idea.   Why?  Because to a kid, having to work for a living seems scary, and the idea that you can get paid regardless of your merit sounds pretty swell.    I had a lot of pretty wild ideas at that age.   But a few years later, I was working for General Motors, and I realized a lot of my younger thinking was pretty naive.

This is not to say I didn't still harbor a lot of pretty far-left thinking.   Like most young people, I tended to look at life as "unfair" because all the older people who had been working for decades had nice shit, and me just starting out had nothing (Gee, I wonder why that is?).   But by working for a living, I realized pretty quickly that naive ideas about "sharing the wealth" were just that - naive.   And this realization comes when you get your first paycheck and see how much the government takes out of it - to pay for other people's health care and retirement and welfare.

The Hippies morphed into the Yuppies - with amazing speed and without any sense of irony.  Jerry Rubin, for example, was a far-left hippie to turned into a successful businessman in the 1980's - renouncing many of his earlier convictions.  Bill and Hillary Clinton look pretty "far out" in the 1960's, but today, the youth of America consider them to be part of the "establishment".

A lot of these kids protesting today will look back at the things they said and did and shudder.   I know this because I do today.   The naive ideas we had back then seem idiotic once you have some real experience in the world.   You realize, very quickly, that the world can't live in "peace and harmony" because people are just the way they are - selfish, greedy, self-centered, and egotistical.   And you start to realize this at the hippie commune or the wall street protest, when someone "borrows" your shit and never returns it, or that there are some folks who are always takers and never givers.   You sober up pretty quickly.

So while it is easy to say, "kids these days - they're crazy!" - think back to how you behaved at that age and some of the crazy and naive ideas you had that you thought you would always have and how they have changed over time.   People become more conservative as they get older.  It is pretty much a fact of life.

Today's protester will be tomorrow's entrenched establishment conservative.   You can bank on it!