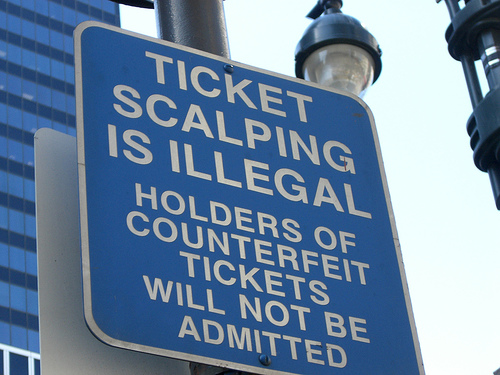 Is ticket scalping a bad thing?  And if so, what are your options?

One of the disappointments for fans of popular shows or groups is that if you try to go online to order tickets, you often find yourself shut out of a concert, only moments after the tickets go on sale.   You can still get tickets, of course, but you have to go to a scalper - either legal or illegal - to get tickets to see the show, often paying two or three times the face value of the tickets.

Some municipalities have tried to outlaw ticket scalping.  Some performers have tried to limit the practice by insisting that all tickets be issued to the ticket holder, by name, and that they need to show ID and the credit card they purchased the ticket with, in order to get in.   In still other venues, ticket scalping is legal.   What is going on here?   A number of things, as we shall see.

And what are your options?   Well you do have a powerful one, but few even bother to think of it.  We'll get to that, later.

For some concert or show promoters, the relationship with scalpers can be like a remora to a shark.   It is a parasitic relationship that benefits the remora mostly, although the sharks might get something out of the deal as well.  The scalpers, by charging 2-3 times the face value of the tickets, make a huge profit - that rightfully should go to the concert or event promoter (and artists).  Of course, one way for an artist or promoter to avoid this, is to raise ticket prices accordingly.   But this presents two problems.  First, artists get charged with being "too greedy" by setting ticket prices to $500 apiece - even if concertgoers end up paying that much to a scalper (in some instances).   Second, if you raise prices high enough, people will decide not to buy, which leads to half-filled venues or even cancelled shows.   Third, being able to say "Sold Out" enhances the status of the performer, even if they miss some of the revenue from ticket sales.

On the other hand, in places like Broadway, ticket scalpers can be a way of ameliorating risk.  The ticket booths you see on the street sell "scalped" tickets that they buy in bulk.  These bulk sales insure a steady income for the show's producers, and the scalper is taking the risk that the show may not in fact sell out.   In some instances, you can buy tickets for less popular shows for below face value, particularly right before showtime.

In other words, scalping is a commodity market, and the scalper is taking a risk that the tickets he buys will be worth more - based entirely on perceived value of their worth - than their face value.   If enough people say, "Gee, I want to see the Eagle's fifteenth farewell tour, but just not that badly!" the scalper can find himself with a mountain of unsold tickets and end up bankrupt.  For every four or five hot shows he gambles on, there may be a dud or two in the mix.

Sadly, attempts to limit scalping seem not to work well.   Despite laws, people still scalp tickets.  Indeed, if you bought a pair of tickets to see Death Metal On Tour, and then found out you have to go to your parents' funeral, you might want to be able unload those $200 tickets on Craigslist.  If we limit the right to re-sell a product based on price alone, we limit the rights of the property owners.  Outlawing scalping is problematic, difficult to enforce, and perhaps un-American.

(Of course one way around this is to allow people to sell back their unsold tickets to the event promoter.  However, this is also problematic as all it does is allow scalpers a form of insurance.   If the tickets turn out to be unpopular, the scalper can simply return them for a refund.    So that wouldn't work, either).

Technical solutions, such as allowing people to buy only so many tickets at a time, or forcing people to present their credit card and ID before entry can be clunky.   One concert venue does this, but forces you to present ID and credit card to receive your tickets, which are then handed to you, and you can then re-sell them on-site.   Asking for ID at the door is difficult, particularly at large venues where thousands of people are attending.  The lines would go around the block - this in addition to searches for alcohol and drugs (and weapons) that are commonplace these days.

So I doubt the scalpers will be put out of business anytime soon.   They have been around since I used to go to rock concerts (marking up $20 tickets to $40!!).  They will be around for years or decades to come.   Perhaps some smart phone "app" might put them out of business.   I wouldn't hold my breath - like I said, concert promoters have a love-hate relationship with scalpers, as they do obtain a perverse benefit from scalping.

So what are your options?   You can try to stay up until midnight on your computer trying to buy tickets online.  Good luck with that - the scalpers have bots which log in at 12:00:01 and scoop up hundreds of tickets at a time (if they are not, in fact, pre-sold tickets in blocs).   You can get  a sleeping bag and wait outside the box office for a week and be first in line to buy tickets (and still be shut out, it's been known to happen - only a limited number are available at the box office, and if you are 10th in line?  Forgetaboutit!).

Or you could bite the bullet and buy tickets from a scalper.   You end up paying a lot this way.   Although if you are willing to take the risk, you can wait until the last minute and see if there are any scalpers desperate to unload their tickets.   I've seen individuals try to sell tickets at events for less than face value.   Once the concert starts, the value of the tickets quickly plummets down to nothing.

But there is one other strategy - the most powerful one - in your arsenal.   You could simply choose not to go.   The reason scalpers thrive is that people decide they desperately "have to have" something.   And once you decide you "have to have" something, well, you are utterly screwed.   Because you've given away your only power in negotiation - the power to walk away from the transaction.

And this is true in all aspects of life.  If you decide you "have to have" a shiny red Camaro, well, you are going to get hosed by the car dealer.   If you can walk away from the deal then you have leverage in negotiation.   Once you get emotionally hooked, it is all over for you.

And if you think about it, if more people did this, the scalpers would largely disappear or at the very least, their business would shrink.   What drives ticket prices through the stratosphere is people deciding they have to have tickets to see the Rolling Stones doing their Geriatric Walker Tour.    If more people said, "Gee, paying $500 for a ticket that has a face value of $100 just isn't a worthwhile bargain" then the resale ticket prices would go down.   And trust me, the Stones will do five or ten more "farewell" tours, even if they have to prop up Keith Richards with a stick.

Sure, it is fun to go to a concert - or to a Broadway show.   But fun has a ceiling price.  Eventually there reaches a point where the cost-benefit analysis doesn't make sense.  Because let's face it, a concert or a Broadway show isn't quite like oxygen.   You don't need it to live.  And often these shows are less than satisfying, particularly in some venues, such as stadium concerts (where the acoustics are horrific, the performers look like ants on stage, and the next day, your ears are ringing from permanent hearing damage - what's not to like?).

(One of the last "concerts" I went to was the Grateful Dead in the Carrier dome.   It was sort of fun, but the concrete structure meant that the music was muddled and echoed.   It was impossible to really see much, and someone handed me a joint that was laced with "something."   It was, in retrospect, not really a fun experience or even a musical one.  And I realized that I really didn't like this noisy events very much, and that's OK.   Seeing Elvis Costello at the Landmark Theater, back in 1978, well, that was pretty cool.   AC/DC, on the other hand, well that just hurt my ears.  It's OK to decide you don't like something, even if all your peers are ga-ga about it - or are pretending to be as well).

So why do people pay scalpers so much for tickets?   Well, our nasty old friend status is at work again.  And no doubt you've seen this.   On a college campus, some Jethro brags about "snagging tickets to the Phish concert" (back in the day) and then brags about how much he paid for the tickets.  "But it's so totally worth it, bro!" he says, reveling in the glory of being one of the chosen few and rubbing your nose in it.

Status is, in short, a chance to show that you are special, unique, one of the chosen few, and above the rest of humanity.  We all do it, even I.  And it is hard sometimes to see we are doing it.   So to some extent, the high price charged by scalpers enhances the experience much as the high prices charged for cocaine enhance the status of that drug (again, back in the day).   The plebes don't value that which they don't pay for, P.T. Barnum supposedly said.

But being outraged about scalpers?   Don't waste your breath on it.   Again, it is a form of externalizing to blame scalpers or the scalping industry - which has been around for decades, if not centuries.  When you externalize (blame the scalpers) you shift the blame for your dilemma to an outside force that cannot be overcome, defeated, or stymied, in any real way.  And by doing so, you cloud the real issue - your desire to go to the concert and why it is so important to you - and neglect to consider choices you can make such as deciding not to go, in favor of blaming outside, unseen others.

The "have to have" mentality plus externalizing plus status adds up to a losing game for the consumer.