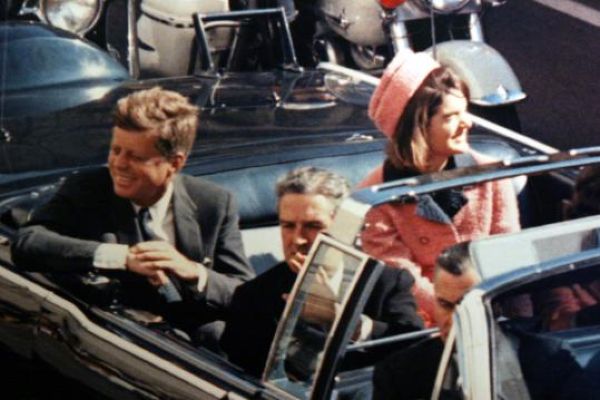 
A reader writes that conspiracies actually exist, and thus I am full of hooey for saying that believing in conspiracy theories is nonsense.

He then goes on to cite historical events as "conspiracies" of the past.  But the events he cites are not really conspiracies, but just shit that happened.

There is a big difference between conspiracy theories and historical facts.   I suppose you could argue that Hitler's "final solution" was a conspiracy.   However, it was also the official policy of the third Reich.  And while the Nazis didn't go out of their way to advertise it, people were well aware of the plight of Jews in Nazi Germany and occupied territories, if not necessarily the horrific extent of it, until the end of the war (and of course, today, conspiracy theorists argue that it all never happened, right?).

Or on a smaller scale, yes a conspiracy existed to assassinate President Lincoln.   However, the "conspiracy" was limited to one man and a couple of associates.  Sadly, they hanged the owner of the boarding house where he lived, just to be on the safe side.

Most conspiracies are like that - small groups of people conspiring together to do one thing, and then quickly doing it.  The assassination of Caesar, for example.   Long-winded and long-time conspiracies, spanning decades and involving thousands of people are simply not workable, as someone eventually would spill the beans.   And as I have noted before, our government just isn't organized well enough (or staffed) to run any major conspiracies.  If you doubt this, spend some time at your local post office.   Or think about your time in the military - and the people you worked with.   Could they really run a major conspiracy?   They can barely conspire to make a pot of coffee at 6 AM.   Be real!

Conspiracy theories differ from History in that Conspiracy Theories are just that - wild-assed theories supported by a lot of flimsy or made-up "evidence" while ignoring mountains of evidence to the contrary.  There is a pattern to these things, if you know where to look!  (Or so they claim, of course).  But actually there is a pattern, not to the conspiracies themselves, but to the conspiracy theorists and how they interpret events to fit their predisposition to see conspiracies.

For example, one thing conspiracy theorists like to harp on is "strange coincidences" such as the arrangement of letters or numbers in documents or the like, that are supposed "codes" that only those in-the-know can decipher.   This is, of course, schizophrenic thinking, much like that illustrated in the movie "A Beautiful Mind" where the protagonist goes off the deep end and starts seeing "patterns" and messages in magazine articles.  Patterns that of course, aren't there.

Some conspiracy theorists see patterns even in our currency - hidden Illuminati or Masonic symbols in the dollar bill (what is it with that creepy eye and pyramid thing?).   These are offered up as "proof" of the conspiracy, as if the conspirators left us a trail of breadcrumbs.

Frankly, that sort of shit smacks of the old Batman television series, where the Riddler or Joker would intentionally leave clues as to where he would commit his next crime.   Let's be realistic here - if you were a master criminal or conspirator, you would not leave a breadcrumb trail to your crimes or conspiracy that only those with a secret decoder ring could decode.   That's comic book shit.

A second hallmark of conspiracy theories is what I call the nitpicking defense. The conspiracy theorist will pick away at some trivial inconsistency in a story and use this as "proof" that a conspiracy is afoot - never mind that the trivial inconsistency is irrelevant to the main idea.  So, for example, there is a pagination error in the Warren Report - surely this is proof of the conspiracy!  Meanwhile, they simply ignore mountains of relevant evidence and focus on the obscure.

The third hallmark of conspiracy theorists is that they totally disregard real evidence or anything that would tend to discredit their theories.  The nitpicking thing is the "smoking gun" and the eyewitness testimony of thousands of people (and videos) mean nothing.   For example, the "9/11 Truthers" will tell you "fire can't melt steel!" and say the entire thing was a done by a missile.  The videotapes and the eyewitness testimony of thousands of people who were there and saw it happen?  Well, mass hypnosis, of course!  (Having worked in a metallurgical lab, I can tell you that fire can anneal steel to the point where it is soft and will bend.  If you have a barbecue grill in your back yard, you already know this).

A fourth hallmark is made-up evidence.  People are alleging that every recent mass-shooting is a fake put-up job, or "false flag" operation (they love the lingo, they do!) and that the same hired "actors" appear in the photos accompanying the Connecticut school shooting or the Colorado theater shooting (because, as we all know, you can get to the bottom of these things by studying photos online with a magnifying glass, Sherlock!).  But of course, these are easily shown to be faked photos and made-up evidence.  And the conspiracy theorist, if they respond at all to the debunking, will say "Well, that only proves my point - people are trying to discredit me!"  The old false-flag false-flag kerfuffle!

The fifth hallmark is that only screwballs and nutjobs believe this sort of nonsense.  Believing in conspiracy theories is a sign you are starting to lose your mind.   Pull back before it is too late!  Because believing in conspiracy theories is a one-way trip to the booby-hatch.   No, you are not going to solve the Kennedy Assassination, or prove that Aliens exist in area 57.   Nor are you going to be a "hero" to the tax denier movement by standing up in court and denying they have jurisdiction.  (Judge: "Gee, you're right!  What were we thinking?  Case dismissed!")

Ah, the hero scenario - the sixth hallmark.  And it is the same scenario that hoarders have (and conspiracy theorists are often hoarders as well).  They will be heroes and "save the day" by providing some missing component or part they have been hoarding for 20 years - or by proving that the Federal Reserve is out to wreck the economy - or whatever.   The tax denier fellow mentioned in my previous posting recalled that he felt he would be a "hero" to the tax denier movement by going to trial and showing the judge that income tax doesn't exist.   He now realizes what an idiot he was - and being a hero to a bunch of crazy people is no real bargain.

And a lot of people play the "hero" gambit - wanting to save the world, whether it is by protesting Wall Street, or by exposing Hillary's malfeasance, or whatever.   And maybe part of this is a good thing - a survival instinct as well - that has gone off the rails.   If you think about being a "hero" and "saving" people, think first about saving yourself.  Sadly, a lot of people rush off to save the world, without thinking of themselves or their family first.   It is not selfish to take care of yourself - it is a social responsibility.

Take the "Clinton Death List - which is a prime example of how conspiracy theorists work.   Some of the names on the list are people still alive, so they couldn't have been killed by the Clintons (made-up evidence). Other deaths are just listed as "suspicious" which makes it sound ominous, but no reasoning as to why it is suspicious is given.  Trivial "inconsistencies" (also often made-up) are touted as "proof" that someone's death was unnatural.  Coroner's reports and other evidence is simply disregarded.   Dead people are listed as being "linked" to the Clintons, when the links are tenuous at best - if they exist at all.  And of course, the underlying thing that is disregarded is that if you live long enough, a lot of people you know will die.   So it is not unusual that the Clintons, now in their late 60's, know a lot of dead people.  So do I.  Buwhahahaha!

I am only 55 years old, and yet my grandparents, parents, my sister, several friends from high school and college, and some co-workers and acquaintances have all died.   Clearly I must be a serial killer.  I started with Grandpa (who died of "old age" if you believe the coroner report!  These things can be faked!) and worked my way from there.  Even more damning is that when Grandpa and my parents died, I stood to inherit which of course gives me motive for the crime.  A fellow Patent Attorney I knew died of a "heart attack" (always with quotes, of course) one day at work.  A little Potassium Chloride, in an easily concealable injection could do the same thing, of course. Obviously, I had motive to murder him, as I wanted to steal away his clients!  The fact that I was in another city at the time is irrelevant.  Alibis can be bought, you know!

You see how this works.   You can create any conspiracy you want to, out of whole cloth.   And most are.

Are the people who obsess about conspiracies stupid people?  Idiots?  Morons?   No, many of them are "smart" people, like the airline pilot or the computer company owner we profiled in a previous posting.   And as illustrated in A Beautiful Mind, even brilliant mathematicians can get caught up in this nonsense (and, with much effort, walk themselves back from the brink).

Why do people do this?   Well, again, our brains are neural networks and one thing neural networks do very well is pattern recognition.   A big chunk of our brain is devoted just to facial recognition, which is a huge survival instinct.   But it is one reason we see Jesus' face in a taco, or the Virgin Mary in a wall-stain.  We are predisposed to see patterns - even if they aren't there.  (and for the record, it is not Jesus' face in the taco - it is just a random pattern that our brains "recognize" as a face).

So the pattern recognition part of the brain overheats.   A brilliant mathematician might need this to discover new mathematical relationships at a high level.   On the other hand, if misdirected, it sends him off the deep end.

You have to police your brain and keep it from racing like that, in neutral.   And everyone does it, to some extent.  You lay awake at night thinking nonsense thoughts and you can't get to sleep.   "Shut up, brain!" you say, but he keeps you awake with worries that the pilot light on the water heater might have blown out - even though you have an electric one.

Don't believe everything you think is a popular phrase, and until now, I really didn't understand what it meant.   Your brain can do a lot of amazing things.  It can also rev to redline in neutral and take out a valve or two - or break a connecting rod.

Because when you get right down to it, obsessing about conspiracy theories is not only a pointless waste of time, it is also mentally unhealthy and a surefire path to mental illness.  There is no such thing as a mentally balanced and well-adjusted conspiracy theorist.   It is an oxymoron - they don't exist.   They are all cranks and crackpots, droning on their YouTube channels about how awful life is.   And life is awful, for them and their families, as they have to live with their mental illnesses.

And not only is it a surefire one-way trip to personal misery, but financial as well.   Mentally ill people do not live as long as the general population, and are at far higher risk for becoming homeless and destitute.

Stop believing in silly nonsense and walk back to reality.   It is an essential first step to take to financial freedom.
Newer Post Older Post Home