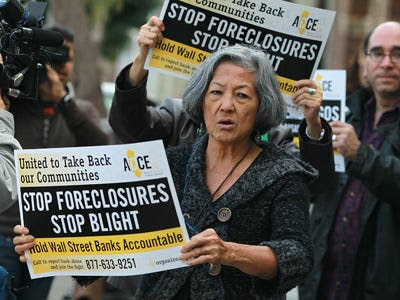 The best way to deal with protesters is to appear to cave into them, while getting what you really want.

In the 1960's people started protesting more and the "establishment" got kind of worried about this.   And it doesn't matter what it was they were protesting about - people protested about everything.   The powers-that-be freaked out and tried using riot police, the National Guard, and tear gas.   This only made things worse, of course, as it made the power elite look like even more ruthless bastards and gave the protesters yet more to protest about (and in some instances, something real to protest about for the first time!).

A lot has changed since then, and today, governments, businessmen, and colleges are better prepared for Protesters and better able to handle them.  As a result, while protests still occur, it is a lot easier to defuse them, often by pretending to cave in to demands.

A developer keyed me into this many years ago, in law school, where he taught a course on how to build office complexes and strip malls.   To some Lefties the word "developer" is itself a dirty word - the sort of people who do nothing but build strip-malls and parking lots and uglify the nation.  Of course, even the Lefties patronize the resulting businesses so I am not sure what the point is.

But back in the 1960's and 1970's, some developers got into hot water by proposing developments, only to be shot down when protesters showed up at zoning meetings or garnered free publicity on the evening news by having a "protest" outside the construction site - often only a dozen people or so, with picket signs.  The protesters became adept (and still are) in creating eye-candy for the newspapers and evening news, who are usually desperate on a slow news day to have something to report other than a car accident.

So, if you can have three minutes of footage of people with signs and some long-hair decrying the fate of the baby penguins (whose breeding ground is on the site of your proposed shopping mall) it is "in the can" for the local Eyewitness News Team.   Local politicians know the drill on this.  Whenever you see a movement like this, you jump out in front of it and then claim to be leading the parade.   So the local city council gets up in arms and you don't get your building permits, easements, and eminent domain takeover of the local youth camp.

Developers got wise to this, though, pretty quickly.   The key, as it turns out, happened by accident - sort of like that New Coke deal.   A developer wanted to build 500 new homes.  The protesters showed up and claimed it would ruin wetlands and so forth.   So a city councilman got into the act and "made peace" by downsizing the development to 250 units and gave the developer a tax break to make up the difference. The protesters are satisfied.  The politician is made to look good.  And the developer realizes that he still comes out ahead in the deal.

So, next time around, when he wants to build a 500 home development, he applies for a permit for 1000 homes.  Hey, if he gets it, so much the better.  But his real intention is 500 homes.  The protesters show up, the news covers it, angry words are said in zoning board meetings, politicians make sage pronouncements - and the developer gets what he wanted all along - a permit to build 500 homes.  The protesters can claim they "won" and the politicians can claim they are "doing their job" and the developer totes his money to the bank in a wheelbarrow.  Everyone is happy.

The next time you see one of these deals go down, where the developer agrees to "only" build a 20-story building instead of a 40-story one, think about what is really happening and whether your "community activists" are in fact being bamboozled.  Or maybe they know they are, but won't admit it.

With colleges, the same is true.  As one Dean of Students explained to me, the most obvious thing that they figured out is that students graduate every four years and it is a lot easier to wait them out than to worry much about their list of demands.   Some schools - even very liberal ones - simply threaten to withhold diplomas or transcripts if students don't fall into line.

Cornell University, in ultra-left-wing Ithaca, New York, wanted to cut down a "woods" that was popular with the students as a place to "hang out" (read: smoke dope).   They literally wanted to "pave paradise and put up a parking lot" on campus.  To any veteran of the 1960's this is a no-brainer.  Tress versus cars.  Grass versus asphalt.   I mean, shutting this puppy down shouldn't be too hard, right?

So the protests started and some students chained themselves to trees and one even climbed a tree and lived in it for a week.  It all went well until the University said to the students that diplomas would not be forthcoming unless they vacated the area and moreover that transcripts would be withheld for any student who did not leave peaceably.  The bolt-cutters came out and the chainsaws were started.  Every student left in short order.   With so much in student loans to repay, they did the math on this and simply gave up.

Now bear in mind this is an ultra-left-wing campus, and you can see it ain't hard to placate demonstrators.

But there are other, less draconian ways of dealing with demonstrators, and one is to simply appear to give in.  You promise to set up a committee to study their grievances, and appoint a few of the more loudmouthed of the protesters as well as some of your more inept faculty members to the committee.   Nothing can stifle progress more than a committee meeting.  After a few of these snooze-fests, even the most boisterous protester is struggling to stay awake.   But everyone can say they "won" and then go home.  And eventually, the protester graduates, and your problems are solved.

Strategic retreat is nothing new.  Russia has used its vast territories to thwart the greatest armies ever assembled.  Napoleon and Hitler both broke their back on the steppes of Russia - as they ventured far beyond the distance their supply lines would take them.   Appear to cave in, and when they are over-extended and fatigued, then you strike back.

So what's the point in all of this?   Well, before you get caught up in someone else's protest, think about what is really going on.  Odds are, it is far more Machiavellian than you think, on both sides of the equation.  Often the professional protesters are out for their own fame and fortune (usually trying to get street cred to become politicos later on).  The politicians are out to save their hides.  The developers are out to make money.  If you get involved, you may be little more than a pawn in someone else's game.  Being "outraged" is what they want you to do.  But in the end analysis, it is often just a waste of your precious emotional energy.