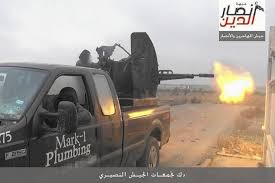 Fundamentalists rednecks running around in pickup trucks brandishing guns.   Whether it is an American "militia" or ISIS, sometimes they literally have the same trucks!


In a recent New Yorker article a Turkish ex-pat describes how the rise of Islamic fundamentalism and Turkish nationalism has altered that country.  It is a familiar story, repeated throughout the Middle East.  A country whose boundaries were decided by Western powers after the war is run by a pro-Western dictator, who suppresses Islamic fundamentalism and local cultural traditions in favor of Western cultural values.  And to achieve this, a secret police interrogates, tortures, and kills anyone who disagrees with them, which in turn, gives rise to underground anti-government movements.

Turkey, Iran, Iraq, Syria, Egypt - the story is about the same, just the actors are different.  And in each case, some liberals here in America championed the cause of nationalists, even though the religious fundamentalism  of these groups would harshly conflict with the cultural values of liberals.  The "Westernized elites" are deemed to be at war with the Islamic nationalists.  In Turkey they even call them "White Turks" (Westerners) and "Black Turks" (Islamic nationalists) which illustrates the racial aspect of it (not much unlike Batista's Cuba).

What struck me as interesting is that the same sort of movement is going on today in the USA.   Again, different actors, different religions, but the same old shit.   Flag-waving self-proclaimed "patriots" who are often allied with fundamentalist Christianity, are hoarding guns and ammunition and praying for a Civil War, on in recent weeks, actually trying to start one (albeit in a half-assed manner).

And this begs the question, could this happen here?   Could our country be drawn into a real civil war or taken over by religious fundamentalists, much as has happened in the Arab world?   It would seem that the strategies and forces at play are one and the same.   The poor, uneducated, fundamentalists versus the perceived "elite" educated upper classes, each with a different set of cultural values, going at each other's throats.    The stake of the game is civilization itself.

One could argue that "it can't happen here" as we do indeed have the largest military in the world.   Many of the Islamic countries racked by violence or civil war had weak central governments or weak militaries.   Others, of course, were little more than military states, but militaries are made up of individual men, whose allegiance can be swayed.

Also, despite the crybaby antics of self-styled militias, we hardly have a "secret police" in the US these days, although to hear the liberals tell it, our police force is made up of a bunch of gun-happy Nazis who shoot first and ask questions later.   Sadly, that sort of thinking plays (perhaps intentionally) into the hands of the far right.

The real problem, of course, is not the minority of crackpots who want upheaval and revolution, but the vast majority who are too blasé to do anything about it.   The liberal left is unarmed and unwilling to do anything to defend their culture.  The middle-of-the-road middle-class just wants to make their next mortgage payment.

As the author of the New Yorker piece illustrated, her family, once educated in western values and skills, left the country for a better life in the US, as I am sure many do.  Thus, the best and brightest are concerned only with improving their own lot.  The poor and uneducated are left to stew in the juices of fundamentalist religion and right-wing nationalism.

And as education and western cultural values are tied to perceived (or real) oppression, they fall further from favor with the masses, who resort to more primitive beliefs and religious values which are aligned with their nationalist agendas.

It is an interesting parallel - rednecks driving around in pickup trucks brandishing weapons, proclaiming the coming of a religious-based state.   Whether it is Eastern Oregon or Western Iraq, it is the same old shit, different day.

And maybe, unless we want our freedoms to evaporate as they have across the Middle East, we should be more proactive and speak out louder against these forces of primitivism and anti-civilization.

And maybe, we need to tone down the rhetoric a bit about "revolutions" and "civil war" and "oppression" and "police brutality".   Because as the example of the Middle East shows, once the fundamentalists take power, you'll be in a world of woe.