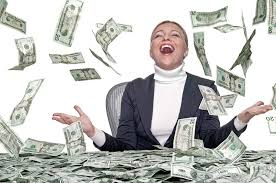 A lot of people think a Million Dollars is a lot of money.  A lot more think a Billion is a lot more than it is!


In the 1960's, the term "Millionaire" was viewed with awe.  In "The Beverly Hillbillies" Jed Clampett had "millions" of dollars and we all thought that was more money than you could spend in a lifetime. Back then, it was.  Average family income back then (with single-earner families!) was about $5,000 to $7,000 depending on which website you consult.  Today, the median income or average income in the US varies from about $50,000 to $70,000 again depending on which website you consult.

So "Millionaire" really doesn't mean much today, other than "comfortably middle class." Indeed, in many parts of the country, a house costing a half-million is deemed to be a spec-built suburban middle-class tract home and not some exclusive gated-compound enclave for rich folks.

A million is ten piles of $100,000 each.  Sounds like a lot, but again, median income in the USA today is about $50,000.  So a million bucks, without interest, is enough to live on for about 20 years, maybe 30 with interest - at a fairly middle-class non-extravagant lifestyle.  It is enough to retire on, basically.

Yet we still use the term "millionaire" to describe a rich person and it really isn't correct.

Now the term "Billion" has its own problems, starting with not many people know what it even means.  A lot of clueless rednecks think a billion dollars is a million-million dollars.  And this was indeed true in British English - many years back.  However, the modern definition is one-thousand million, which sounds like a lot of money because it is a lot of money.  Yes, if you have a Billion dollars, you have an awful lot of money to spend - more than you can spend in one lifetime, even if you go out and buy personal jets and private castles.

Although, if you are not clever, you can burn through a Billion in short order, simply by spending too carelessly and not thinking through some white elephant investments. 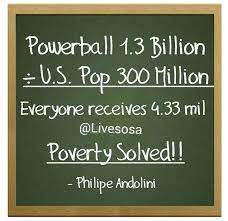 Even a moron should see the error in this math.
On Facebook and other social media, the confusion over Billion is often used to create phony "Memes" that sound scary but make no sense.  For example, the idiotic meme above that came out when the Powerball jackpot went over a Billion dollars.

If ever there was a poster-boy for "You don't need to know math in real life" it is Philipe Andolini.   What a maroon, as Bugs Bunny would say.  Not only is his math "a little off" it is a lot off.   Not only would everyone not receive $4.33 million, but they would instead get $4.33.  Ouch.
UPDATE:  I think this "Philipe Andolini" guy is just trolling.  His Twitter feed is full of similar disinformation (for example, claiming that Bill Gates' salary would amount to everyone getting millions of dollars).  He has to know by now that a Billion is not a million-million.  So it must be a joke he thinks is funny.  Not funny, though.  Just stupid.

The problem is, a lot of people believe his math - or have no idea how math works or really believe that there is enough money in the United States of America to hand out over four million dollars to each man, woman and child in the country.  People really believe this - or they really don't understand even the most basics of how money works or how to add, subtract, and divide.

Even if you don't have a handle on basic math, one would think that you could latch on to the improbability of it all - that the suggestion itself is preposterous.  One would think anyway.  If something sounds too good to be true.... it probably is.   But I guess you don't need to know even that in "real life."

(The National "net worth" which by the way, hit an all time high in 2015, is $84.9 Trillion.  A trillion IS a million-millions.  So in a country of 330 million people, our average net worth would be $257,272.   If your net worth is a quarter-million dollars, you are "average".   So no, even the entire wealth of the United States is not enough to give everyone four-million bucks!  It also puts the national debt, of about $60,000 per person, in perspective).

If you crunch the numbers on this, based on population, it illustrates the point.  There are a lot of millionaires in this country, about 3.4 million to be exact, or more than 1% of the population.  The number is growing rapidly simply because being a millionaire ain't what it used to be.   As I noted, it is basically enough to retire on, these days, and not a lot more.   Yet "millionaires" are demonized by the likes of Bernie Sanders as some sort of greedy people out to rape the poor - rather than someone with a net worth merely four times the national average.

Funny thing, though.  Sanders has spent his whole life in government service (and did little else) and suckled on the teat of Uncle Sugar (and the State of Vermont) for decades.  When he retires, he will have a fully-vested pension (if not two) and fully paid-for health care.   For each $50,000 a year he gets, that represents a million bucks in the bank you and I would have to save up to retire at that level.   So Sanders, even if he only has a purported net worth of "only" $300,000, is in reality a Millionaire many times over.   Maybe we should tax him, first.
UPDATE: Comrade Bernie inherited $600,000 from his wife's parents (and paid no Federal inheritance tax) and bought a dacha on Lake Champlain, bringing this "Man of the peoples" housing count to four as I see it (including an investment he rents out - evil landlord!).   He is hardly rich, but is easily a millionaire.

And this is not to say the remaining 99% are destitute - many make good salaries and indeed, more money than some Millionaires.   But some have little or no savings - again, the dichotomy between income and wealth that eludes so many.   Wage-earners tend to look at "wealth" in terms of annual salary, not how much is saved.   And that is one reason they remain poor even with a good paycheck.

Still others are in the process of saving up for retirement but have yet to hit that seven-figure mark.   But they likely will, before they retire in 10-30 years.   Yet others may have reached that mark (or come close) but once retired, started spending their cash and are now working their way back down to zero - as we all will eventually do.   There are a lot of future and former Millionaires in this country, particularly as the 401(k) generation reaches retirement age.

On the Billionaire side, there are only about 530 in the United States - a big drop from 3.4 million!  Your odds of making Billionaire are pretty slim - about 1 in 600,000 (which surely beats the lottery odds!).   Meanwhile, the odds of you being a Millionaire are presently about 1 in 100, which is almost a sure thing in comparison.   In 50 years, the odds will be even better, as a Million dollars means so much less, due to inflation.  Andn as I noted, many of you are well on your way to getting there, while a number of others are unwinding their life savings as we speak.  Thus, the odds of being a Millionaire in your lifetime are probably much greater than 1 in 100.

If we throw in pensioners, the odds drop even further.   As I noted, a million dollars represents a pension income of about $50,000 a year for 30 years.  If you are retired and receiving a pension of $50,000 a year, congratulations, you are a Millionaire as well.  Maybe you don't have a pile of money invested in the stock market, but you may have something better.  Particularly a government pension - they are pretty much guaranteed for life.   If only I had stayed at the Patent Office!   I would be on easy street by now!

Once you add up these numbers, you realize that the 1% is more like the 10% - perhaps even more.   The middle-class is a huge part of this country despite the slightly exaggerated claims of its demise.  Are these the "evil people" that Bernie Sanders wants to demonize and tax to death?   It is an interesting question.

Class warfare is never the answer.   When someone talks about "taxing the rich people" you should be careful that they are not talking about you.
Newer Post Older Post Home