Zen and the Art of BMW Maintenance 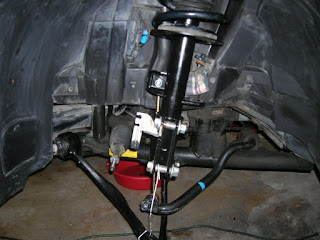 What is quality, anyway?  A vehicle that can be taken apart and rebuilt again and again?  Or a vehicle that is built to be used once and thrown away - but requires no repairs over time.   It is an interesting conundrum.  Strut and axle replacement, 2002 BMW X5.

As I noted in some earlier postings, I used to like BMWs and owned quite a few.  Well, five, anyway.  What I enjoyed about them was that, for the most part, they were designed to be serviced - taken apart and put back together with minimal fuss and muss.  The problem of course, is that the parts cost a lot of money, and hiring someone to do the labor on them was prohibitive.

As a result, they are a car that could be driven 300,000 miles if continually serviced, but in reality, the cost of maintenance easily exceeds resale value by the time they are about 10-15 years old, and many go to the junkyard looking shiny and new, but needing thousands of dollars of work - which are not justified by the vehicle cost.

On the other side of the coin, you have cars like a Toyota Camry, which will easily last 150,000 to 200,000 miles without any major service.   You might replace the spark plugs, I suppose.  But no major fluid changes, no replacing struts or CV joints or other esoterica.   By the time the car is about 15 years old, you just junk it, with most of the original parts still on it.

As one wag put it, "the difference between a German car and a Japanese one, is that the German car will need service over time, while the Japanese car will go 150,000 miles and then just fall apart all at once."

And that explains why you do see some older German cars on the road, maintained by enthusiasts, who can maintain them because they are designed to be taken apart (parts bolt on, instead of being press-fit or welded on, for example).   You still see late 1980's BMW E30's on the road, even today.  On the flip side, you never see a 1988 Toyota Camry tooling about.   They provide good solid service and then "fall apart all at once" which in some respects, is a sign of a well-designed and well-engineered vehicle.

And maybe this is why we won the war.   While the Germans were waiting for parts for their fussy (but technically superior) Messerschmidts, we simply out-produced them by making cheaper and crapper airplanes, but making a whole lot more of them - realizing that the service life of an airplane in wartime might be measured in months.   Stories abound of P-47 pilots crash-landing a crippled plane with whole pistons shot off, and then jumping into a brand-spanking-new one and then continuing the battle.

Some folks would argue that "quality" in an item means that the item can be taken apart, rebuilt, restored, and re-used.   And a lot of "high-end" products sold in the marketplace are like this - the designer ranges and built-in refrigerators and whatnot.  They are a throwback to an earlier era where every town had a lawnmower repair man, a vacuum cleaner repair man, and a small appliance repair man.   Back then, engines would be rebuilt, carburetors cleaned and adjusted.  Electric motors and alternators would be re-wound at the "armature shop" and used again and again.

The problem is, somewhere along the way, a different philosophy took hold - a philosophy that today might make more sense than the view of "quality" in the past.  In the book Zen and the Art of Motorcycle Maintenance, author Robert M. Prisig tries to explain the difference between these "Classical" and "Romantic" views of life:

In Zen and the Art of Motorcycle Maintenance, Pirsig explores the meaning and concept of quality, a term he deems to be undefinable. Pirsig's thesis is that to truly experience quality one must both embrace and apply it as best fits the requirements of the situation. According to Pirsig, such an approach would avoid a great deal of frustration and dissatisfaction common to modern life.

In the book, the Narrator describes the "Romantic" approach to the life of his friend, John Sutherland, who chooses not to learn how to maintain his expensive new motorcycle. John simply hopes for the best with his bike, and when problems do occur he often becomes frustrated and is forced to rely on professional mechanics to repair it. In contrast, the "classical" Narrator has an older motorcycle which he is usually able to diagnose and repair himself through the use of rational problem-solving skills.

The problem with Prisig's dichotomy is that adjusting valves is a pain-in-the-ass after a while.   My first BMW, a 1974 BMW 2002 required a valve lash adjustment every 5,000 miles according to the owner's manual.   This is not a fun procedure, as you have to remove the valve cover, remove the spark plugs, rotate the engine by hand, and then attempt a tricky adjustment with feeler gauges.  If you don't do it exactly right, the engine may run worse than before. 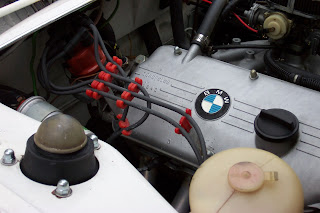 Today, auto engine valves generally require no adjustment.  They require no tune-ups.  And most cars today have variable valve timing which is how we get 300 HP from a 3.0 liter engine, and still get 30 mpg on the highway.  The downside of course, is that when the variable valve timing actuator goes bad, it may take out the cylinder heads and probably the engine, at which point the car is scrapped - at about 150,000 miles.

And while the engines of yore didn't have this problem, few of them went 150,000 miles without a rebuild.  In fact, most were rebuilt long before then, usually because of lack of compression or some overheating incident (as happened to Jackie O's Bavaria).

I think that perhaps Mr. Pirsig got it backwards.   By needlessly adjusting valves and chains and carburetors on his motorbike he was trying to be "Romantic" not "Classical".  He was living the myth of the "rugged individual" who could fix things himself, when in reality, it is more of a mechanical fantasy than a necessity or reality, particularly in today's world.

In other words, he was playing at being mechanic - and sitting in judgement of his friend, who would rather just enjoy his motorcycle than take it apart.   And in the decades since his book was written, the idea of "hands on" maintenance for motorcycles, cars, or indeed much in our life makes less and less sense.

I long ago gave up building my own computers.   It is not only cheaper to buy them pre-assembled, it is a lot easier and more reliable to do so.  Similarly, I have found that "consumer grade" appliances and tools are perfectly acceptable for consumer use.   A cheap Karcher pressure washer beats the snot out of more expensive gasoline-powered models, for the occasional use that most homeowners have.

This is a practical, or Classical view of life today.   And it makes a lot more sense than the viewpoint that may or may not have made sense when Prisig wrote the book.   It costs a lot less money to make something on an assembly line in a factory than it does to re-build it in a small shop.   And today, products are more and more designed to "wear out all at once" rather than be rebuilt.  So the idea of adjusting things and rebuilding things is becoming rapidly dated, much to the chagrin of repair shops everywhere.

Which is why repair shops are disappearing.  The "Mechanic on Duty" sign at the local gas station has been replaced by "Come on in for hot coffee and cold beer!" as selling food and drinks is far more profitable than repairing cars - because car repairs are far less frequent than just a few decades ago (and no one seems to have noticed this).

What makes financial sense today is to buy a pretty basic, consumer-grade appliance, whether it is a car, refrigerator, computer, or whatnot.  Don't spend a lot of money on it, and don't bother with extended warranties.   When it dies, replace it.  They're cheap.

You can spend thousands of dollars on a state-of-the-art wall-screen television.   But they also sell slightly smaller and less sophisticated models for under $400.  Buying the cheaper model might make more sense.   When it dies, you just throw it away.  By then, it is likely outdated anyway and new technology is available.  "Investment grade" appliances and cars simply do not make sense anymore.   It is like with smart phones.   Everyone wants this year's model.  You don't buy a smart phone to last the ages.  It's life is measured in months.

Now some decry this disposable culture.  And they may have a point about some of that.  But on the flip side, we are disposing of cars at a far slower rate than we used to.  Yes, no one keeps their old Atwater-Kent radio for a decade or more.  But that is the nature of electronics - they are obsolete long before they wear out.   As a consumer, however, you can choose to skip an upgrade or two and get away with it.

If you've read my blog, you clearly know that I am no "Romantic" but rather a pragmatist, most of the time.   But I think Mr. Prisig got is all wrong.  It is possible to be a "Zen Motorcycle Mechanic" and be a romantic by doing so - believing that "hands on" maintenance is somehow better than the "drive it until it breaks" mentality.

Of course, this is good news to all of your romantics out there.  You are now the pragmatists, and the "Classicals" are the ones being romantic - pining for the days of carburetor adjustments and "plugs, points, condenser" tuneups.  Who would have though that laziness was logical and hard work was irrational?

And of course, this change comes at a time in my life where the idea of changing clutches in a car sounds like entirely too much work.  Perhaps this change is more of a matter of my perception than anything.  But I don't think so.