Is Welfare Hard to Get? Should it Be? 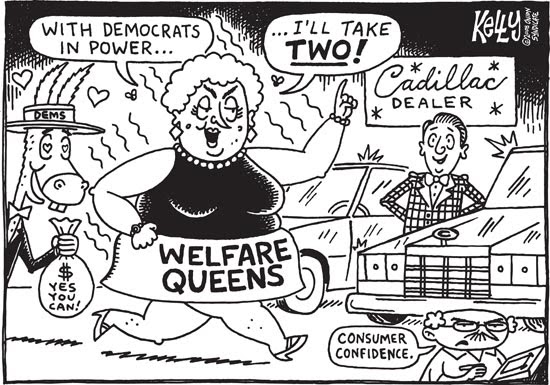 If you want to go on public assistance, it should be difficult to do.
This Kelly cartoon from The Onion illustrates the stereotypes people have about welfare recipients.

If you want to apply for food stamps, the website is right here.  Many States allow you to apply online.  Since the qualifications are based on your income and number of people in your family, all you really need is a tax return to qualify. This is not really that hard to do, and like I said, a record number of people have applied for and gotten food stamps.  I really don't think you need a lawyer for this.

A friend of mine suggested to a grand-daughter that she apply for food stamps, as she was an adult student and didn't make a lot of money.   She went down to the office and spend the day there filling out forms and learned she would only get a minimal amount (like $16 a month, which is better than nothing) as she was single (the amount you get depends on how far below the poverty line you are and how many people there are in the household).  She decided not to apply.

That's too bad, because once you qualify for food stamps, you automatically get a free Obamaphone.  Yes, I know, it wasn't a program started by President Obama.  But you get a nicer phone with more minutes in four months than I get in a year - all free of charge and paid for by that "Universal Access Fee" that other people pay as part of their cell phones.

Since the phone companies (and not the government) run this program, they pretty aggressively market it, and the website to apply online can be found here.  If you are on food stamps (SNAP) you get a phone.  You can also apply based on your income.  Again, if you meet the criteria, you get a phone, period.  This is not hard to do.

Other programs are a little harder.  "Welfare" as we know it is gone, replaced by "Temporary Assistance to Needy Families" (TANF) which has a lifetime limit of five years.  This is a little harder to get, as you may have to actually show up in person and plead your case.   And again, this is just for five years, so it is a way to tide you over until you get a job, not a lifestyle choice.   However, this hasn't prevented the GOP from talking about "Welfare Queens" living off your tax dollars for generations - even if such Queens no longer exist.

Now, Social Security Disability is a little harder to get, as you have to be disabled.   And a lot of folks with some pretty flimsy-appearing disabilities have applied for and gotten Social Security Disability, which has caused a bit of a drag on the system.   When people start collecting for life starting at age 30 or 40, it is far more costly to the system than a person who paid in for 45 years who starts collecting at age 65.

It is harder to get Social Security Disability and it should be.  You have to prove you are disabled and not able to work.  It is not as easy as, for example, getting a doctor to sign for Medical Marijuana prescription.   In both cases, you need a cooperating doctor, but in one it is no questions asked.  The Social Security administration scrutinizes applications more closely.

Now, if you really are disabled, it isn't that hard to get the benefits.   Nevertheless, some lawyers out there play a game where they claim you need a lawyer to get benefits.   And if you have a sketchy claim, maybe this is true.   The way the lawyers work is that they take 50% of past benefits owed as their fee.   So they drag out the proceedings for a couple of years by intentionally submitting poorly prepared documents, all the while arguing they are "fighting the bureaucrats for you!"  After racking up tens of thousands of dollars in back benefits, they finally submit the correct papers and then take half of what you are owed.

If you have a legitimate disability claim, it may be quicker and less expensive to just deal with the Social Security office directly.   Lawyers do not work for free.

Other programs can be harder to get into and stay in, because there is a waiting list.  Public housing and Section-8 housing usually has a waiting list of years.   But once you are in the system, well, you are in for life, basically.   And it can be a pretty sweet deal.   With section-8, the government (Federal, State, and Local) can pay up to 75% of your rent, and the landlord may over-charge the government figuring that you won't pay the other 25% anyway.   You get a free house, essentially.

But again, this is not easy to get.  You need to prove income levels and whatnot (that is the easy part) and then just wait for your name to reach the top of the list.

With regard to medical care, you can qualify for Medicaid if you live below the poverty level, in most States.  It does not cover everything, of course, but most hospitals realize you can't pay the difference so they generally don't come after you.   If you work out a nominal payment plan (a few dollars a month) on a medical bill, they will leave you alone.  If you are over the poverty line, you qualify for (and are required to get) Obamacare.   But at very low income levels, the cost is subsidized almost entirely, and the subsidy increases until about $63000 a year income level where it inexplicably drops off to nothing.  Note also that many pharmaceutical companies have programs to help low-income people afford expensive medicines - worthwhile looking into before you pay retail price for drug.

SSI - or Social Security Supplemental Income is another form of welfare for the elderly.  If you are old and poor, you automatically qualify.  Our cleaning lady got this, once she was over 65 or so.   Problem was, I am certain that most of her income was in cash and thus "under the table".   As a result, her tax return reflected only part of her income (I believe) and her qualification for SSI maybe was overstated.

That is a real issue with all of these programs.  People living the cash lifestyle can qualify for assistance based on their declared income.   If they have a lot of undeclared income, well, they can cheat the system pretty well.   And the government really has no way of checking up on this.  It is ripe for fraud.

There are other subsidies and giveaways depending on where you live.  Some municipalities have free or subsidized subway or bus fare for the poor, the elderly, or the handicapped.   Once you hit age 65, you may get property tax relief.   Admission to State or Federal Parks may be reduced or free once you hit age 65 (regardless of income!).  The list goes on and on.   And of course, there are charities, food banks, free meals, and whatnot, if you bother to look.   And if you are unemployed, you have a lot of time to look.

Is this an unfair system?   Does it provide a luxurious level of living for the poor?   Well, it is not exactly the level of social services they have in some European countries.   You have to hump a bit to get public benefits.   And if you get them, you certainly aren't living the life of Riley.   But should living off the government be a good thing and should it be easy to do?   The answer to both questions is NO.

Why?  Once it is easy to get government assistance, and if government assistance is "comfortable" then there is less incentive to work.   Indeed, many people already today find working a minimum-wage job to be almost a break-even proposition, once the costs of commuting and the like are factored in.   If you can make good money by not working then there is less incentive to work.

Some folks think we should raise the minimum wage from about $8 an hour to $15 an hour - and some places have done this.   The problem with that idea is that many people lose their government assistance if their wages go up.   A raise to $30,000 a year might mean losing food stamps and section-8 housing.  It might also mean people having to pay income taxes for the first time in their lives.   They might then turn Republican if you aren't careful!

It is not easy to get some forms of public assistance.   It is easy to get others, such as SNAP - and the number of people on that program has ballooned in recent years as a result.   Social Security disability isn't easy to get, but if you can get on that, it is like winning the jackpot - guaranteed income for life.  As a result, it is a lot harder to get, but some are saying that an awful lot of people on Social Security disability are really able to do some form of work.   And I've met people who claim to be "disabled" but seem to live very active lives nevertheless.

The number of people on various forms of welfare have been exaggerated somewhat by the far-right.  On the flip side of the coin, if you have a minimum-wage job and qualify for some forms of public assistance, you may be living quite a comfortable lifestyle, if you are careful with money.  The idea that the poor in America are "starving" or "suffering" is a meme that some journalists milk for click-bait headlines, and some of our adversaries (and allies) like to tout to show their supposed superiority.   But the reality is, we have quite a safety net here in the USA.

Your typical "poor" person in America has a place to live, central air conditioning, a car, a television, a microwave, stove, and refrigerator, and is at least 20 pounds overweight.   Obesity is the most common ailment among the poor - not malnutrition.   A "poor" person in Africa has nothing and hasn't eaten in three days.  We need to put these thing in perspective.
Newer Post Older Post Home