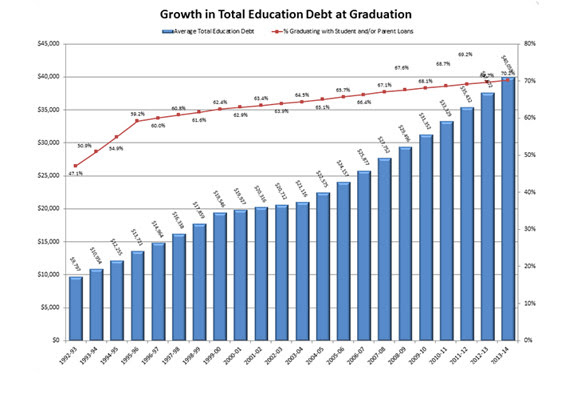 Is the cost of a college education worth about as much debt as a fully-loaded Camry?  One would hope so.


The cost of college has been rising considerably, and it is a trend that has been going on for some time.   But the questions remain - do we really have a student loan debt crisis and exactly how much debt are we talking about here?

A recent article including the graphic above sheds some light on this:

The class of 2015 will each graduate with $35,051 in student debt on average, according to an analysis from Mark Kantrowitz, the publisher of Edvisors.com, a website that provides information to parents and students about college costs and financial aid. That’s about $2,000 more than their peers who graduated in 2014, though the share of students graduating with debt remained roughly the same as last year at about 70%.

But even if we assume the "average" college graduate gets a worthless degree in something stupid, from a no-name university with shitty grades,  is this really an injustice?   Because 38 grand isn't really a lot of money, even if you are working a slacker job.   Yes, this may represent two years' income and take more than a decade to pay off.   But it is not an onerous amount of debt.   Indeed, many people pay more than this for cars today.

Of course, averages and means can be misleading.   There are outliers.   There are folks who have parents pay their way through college and graduate with no debt.  This lowers the average somewhat.   There are other folks who borrow huge sums to get graduate degrees - hundreds of thousands of dollars.   These folks usually are able to pay back the debt because the advanced degrees they get (doctor, lawyer, dentist, whatever) will generate sufficient income to pay back the loans, over time.

There are, of course, the real outliers, which the press love to harp on.   For example, the lady who went to a high-priced ivy-league college to study religion so she could become a Nun.    Problem is, with $100,000 in student loan debt, the convent would not accept her  - you have to be debt-free.   Odd that she never bothered to figure this out in advance, you know by maybe calling the convent and asking.  Odder still that she felt that an ivy-league degree in religion was a prerequisite to being a Nun.   I think the real truth is, she really didn't think this through all the way, and the idea of becoming a Nun came to her only after graduation.

There is a similar story about a lady who wanted to become a nurse, and instead of going to nursing school, went to a very expensive college instead - and then went to nursing school.   Even with the steady employment of being a nurse, she struggles to pay the loans back.

Statistics are fine and all, but as I have noted in the past, statistics do not negate choice.   Just because the vast majority of 18-year-olds still go off to college with no clue as to what they are doing (and rack up a ton of debt in the process) doesn't mean that everyone has to.   There are alternatives - cheaper schools, work-study programs (which I used and still exist), getting valuable degrees instead of worthless ones, and of course not going to college at all if you don't plan on doing more than just partying for four years.

Let's face it, college is a big party.  I say this having spent 14 years of my life in college.   And I delivered pizzas and chicken wings for about five of those years, and I visited every dorm, frat house, and flophouse on campus.   And it was always the same.  The bongs were out, the kegs were tapped, and everyone was having a really good time - on a Tuesday night.   The weekends were even crazier.

What people are pissed off about is that they made poor life choices early in life, and these are poor life choices that will now dog them for years to come.  It took me a decade to pay off my student loans.   But pay them off I did.   Others will refinance over 30 years and be near retirement age before they pay them off (although likely most will pay them off by refinancing a house when they are in their 40's).

I guess what is sad to me is that this trend has been going on for over a decade now.  It is all over the media and talked about (and protested about) every day.   You would think by now that young people and parents would have figured this all out and taken action.   Mom and Dad would sit down with Junior and say, "Let's figure out this college thing - why you are going, what you are going to study, how much it will cost, and what the ultimate cost/benefit will be!"

You would think, anyway.   But perhaps they are already having this discussion and perhaps maybe they are finding that borrowing as much money as you'd pay back in a 4-year car loan isn't really all that much burden as you might think - to get a college degree.

And perhaps maybe the graphic and story above are entirely misleading.   While the fonts are fuzzy, note that the amount of debt and percentage of debt is for "student and parent loans" - not just student debt.   The chart above also includes debt incurred by parents (such as a second mortgage) used to help pay for school.   To say this is "Student loan debt" is a bit disingenuous, but hey, actual student loan debt might not be as alarming a chart, right??
Newer Post Older Post Home