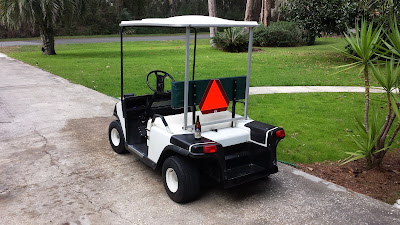 I wrote before about NEV's - Neighborhood Electric Vehicles and how they really make no sense at all from a financial standpoint. On our island, you can drive an NEV or modified golf cart on the road legally.   The problem is, the NEV, with any sort of options (like doors or an upgraded motor) can easily top $20,000.   And for that much you can buy a car with air-conditioned seats, which I did.   Buying an NEV makes no economic sense at all - it is mostly a status symbol.

Golf cart (or golf car) "buggies" have taken off in popularity recently.   Golf courses usually lease these things and then turn them in after about four or five years, when the batteries are about to go dead.   New batteries for a golf car can cost $500 or more, depending on type, so it is easier to just trade the carts in and get new ones.   As a result, there are a lot of late-model secondhand carts on the market.

In the last decade, the "buggy" movement really took off.  People modify these with lift kits, custom upholstery, bigger motors and better controllers and higher voltage (36 V to 48 V) to make them go faster.   In places like The Villages you can ride your golf cart on special trails, and take it "downtown" to dinner and park it next to all the other modified golf cars and shoot the shit.  Some of these can cost tens of thousands of dollars, but a basic used "buggy" modified to seat four and go fast, runs about $4000 to $6000 from a cart dealer.

Rednecks love them.  Every Friday afternoon, campers come roaring down our road - a pickup truck towing a 35-foot 5th wheel trailer and behind that trailer is another trailer with the "buggy" on it.  They get their camper set up and then get out the buggy and ride around the island.  Whoo-wee!   You can drive it on the road here, ain't that sumptin!

Of course, I guess it is fun, being in fresh air and all.  People like to experience velocity - whether it is in a convertible, on a motorcycle or scooter, or on a golf cart or some other contraption with no doors, roof, or even windshield.   It is why riding a motorcycle with a full-face helmet is no fun, riding around town.  It is like having a bucket on your head - a bucket that could save your life, of course.

So yes, it is fun to ride around in these buggies, I guess.  And an economic case could be made that such a buggy, in a retirement community, could be cheaper than a second car, although for $5000 you could buy a serviceable second hand Corolla or something.  If you want the wind in your hair, then take the doors off it.

For me, the idea of spending five grand on a buggy was out of the question.  However, I thought that if I could find one for cheap and fix it up, it might be a fun project.   And a neighbor recently unloaded their 1994 EZ-GO Marathon for $299.   It had new batteries (more on that later) and new wheels with 18" tires.  It was in sad shape, though, with the windshield cracked, the roof missing, and covered in layers of dirt.   But the batteries alone were worth more than $299 so I bought it, figuring I could play around with it and if I was bored with it, sell it for at least what I paid for it, or had into it.

The first thing I learned about buggies is that it pays to buy a newer one.  The Marathon model was discontinued in 1994, so my example is one of the last off the line, with a solid-state controller.  It has a solid steel body, not a fiberglass body-on-frame like the newer TXT model which came out after the Marathon - and is still made today.

You can see how a "project buggy" can become a pretty expensive project in short order.   But of course, his buggy looks pretty slick and it will go 27 mph, whereas a stock golf cart tops out at about 12-17 mph which is really too slow to be driving on a roadway with speed limits of 25-25 mph.

The thing about the TXT model is since it is still in production, all the accessories and goodies are available from a number of sources and are ironically cheaper than parts for the older Marathon.   After researching the Marathon, I realize that while it is a serviceable cart, it may not be worth throwing a lot of money at.  If I want to spend $5000 modding a buggy, it would make more sense to buy an off-lease EZ-GO TXT (or late model Yamaha or Club Car) and start from there.

So I might spring for a new controller, and maybe add two more 6V batteries to bring it up to 48 Volts, which might give it more torque and go a little faster.   If I keep my eyes out for used parts and bargains, it may be possible to do other modifications cheaply.  Some parts are pretty cheap.  A new folding tinted windshield is only $70 and things like a rear-view mirror, light switch, and LED beacon (necessary to avoid being run over) are all under $10.   A "block" style lift kit is about $70 on eBay (you can spend $300 on a new axle if you prefer).

Headlights and taillights are required to be road-legal on our island, and it came with those - but used a house light switch (!!) to turn them on.  A new golf car light switch was $5, so why not?   Seat belts were also required and I lucked out in that my neighbor with the slick buggy had an extra set and mounting bracket that he let me have cheap (it did not fit his cart, apparently).  So we are street legal, if not necessarily fast.   We've driven it around the island a couple of times and to events, and yes, it is kind of fun, if not a little cold this time of year.

By the way, that is the best way to get parts if you have a hobby car or buggy - be patient.   Someone will have the part you are looking for on Craigslist or eBay and you can get it for half the retail cost, if you are wily.  Use the Google notifications feature to alert you when something comes up on Craigslist.  I set this already for "Soft Tub" as eventually we will have to replace our old one, and people often sell these cheaply online.   $300 beats $3000 any day!

I am not sure it is worth spending $1500 or more on a better controller, more powerful motor, and whatnot for this cart.  Someone on neighboring Rich People's Island has a set of larger wheels for sale, asking $350 which sounds like a lot of money, until you consider he paid $900 for the set.   Not sure why he is selling them though, and like most "Buggy" wheels, they are ugly as sin (flashy and gaudy seems to be what the buggy set likes).  It would also be more money than I spent on the cart.

Batteries are a big deal with Buggies.   Imagine if your car needed a new engine every five years.   You would not be too keen on keeping a car for long - or paying much for one.   Golf Cars seem to burn through batteries about every five years or so.   You can make them last longer.  Sometimes, if they are abused, they don't even last that long.   There are six to eight batteries, depending on configuration and they can run from $80 to $200 apiece, depending on size and type.   So when buying a buggy, you are basically buying a disposable cigarette lighter.  If it is almost out of gas, it is worth little or nothing.  A buggy "needing new batteries" isn't worth much, unless it is a later-model heavily modded one.  And even then - after five years, a modded buggy can look pretty sad - and maybe need work.

So for $299, I did OK, considering the batteries are fairly fresh.   Once the batteries are dead, though, an old Marathon isn't worth a helluva lot.   And there's the conundrum - do you throw more money at an older cart, or just sell it for whatever you can get for it and move on to a newer cart?

My gut reaction is to try out this cart, see if I can get it to go a little faster and tweak it a bit, inexpensively.  So far, I've spend maybe $150 in parts, including the new windshield.   Not sure if I want to throw $1500 at it, anytime soon.   And it isn't hard to do that, even with an older buggy.   But we might also decide that riding around in a golf cart isn't all that fun.  It also can be dangerous, as even at 25-35 mph, a collision with a car could be deadly.

The picture above was taken after we pressure washed all the dirt off it, buffed the paint with a power buffer and some compound, and fixed a lot of little things that were wrong with it - missing bolts, loose screws, that sort of thing.   We put the roof back on as well.   That kind of thing is fun, for me - tinkering.  Just buying stuff out of a catalog and bolting it on, well, that is not as much fun.   Figuring out how to do it on the cheap - well that's like a treasure hunt!

So, something to keep me busy, besides twirl-a-squirrel.