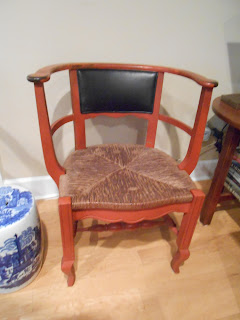 You can find durable inexpensive and attractive furniture, sometimes in a dumpster!


In a recent article in Market Watch I was interviewed about IKEA furniture.  As I noted in my posting on the subject, I thought IKEA furniture was not a good bargain, as while it is cheap and looks good, it doesn't last very long - maybe 5-10 years at most, if even that.   As a result, you end up buying other furniture anyway, so why bother?

Good furniture should last a lifetime, if not longer.  And it should be strong enough to jack up a car on it - that's my test for quality furniture!

Well, I thought I should show some examples of my furniture "finds".   Yes, some of my dumpster furniture is no longer with us as I sold it at garage sales.   That's pretty sweet - getting something for free, using it for a decade, and then selling it for pure profit.   Let me know when you can do that with any piece of IKEA!

The chair above was one of a set of four, found in a dumpster here on the island.  It is a chinese modern chair with a reed bottom.  It was being tossed away and Mark asked the person tossing it, "got any more like it?" which yielded its three brothers.   They had a lame black vinyl cushion over the reed, which when removed revealed a nice SOLID comfortable chair that blends well with our Arts & Crafts motif.  Can't beat the price, either!

Here's a recent acquisition - a set of three tables bought at a garage sale for $5.   They were also selling golf carts for $299.  The tables were sturdy and made of solid wood (likely pine) but had been "gnawed on" by the owner's dog, so that each corner had a chew pattern on it.   What to do with such a set of tables? 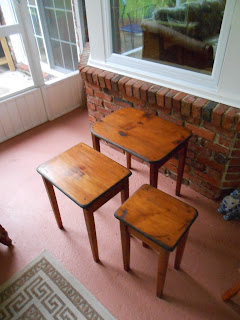 Well, Mark got out the electric drill and a sanding disc, plus an old bucket of stain.   He rounded off the corners to give it a primitive/colonial look and then stained it.  Voila!   We thought about using a router to make a nice edge, but this was easier and frankly, worked better than the router.   If you have a router, though, you could have radiused the corners and gone fancy with it.  It all depends on your skill levels and what tools you have - or can borrow.  Give it two coats of Johnson's paste wax, and you've got a nice set of nesting end tables - for nearly free.  And if you didn't know they had been chewed by a dog, you might think they were "antique-y" looking.

This next piece we actually paid $300 for in an antique shop.   The owner of the shop flew over to Europe and filled up containers with "old" furniture (this piece is Dutch, from the 1930's) and had it shipped back.  Hardly an antique, it was however made of quarter-sawn tiger oak - solid stuff.  We removed a filigree from the top which was a little too dressy, and it has that "Craftsman" revival look  (or Mission style) - at a fraction of the cost (a real period piece would run into the thousands!). 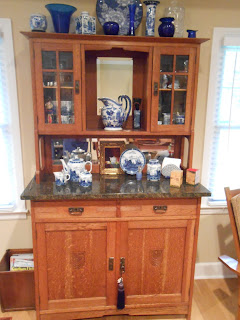 Mission style at IKEA prices.  Bonus: It won't tip over!

The top was sagging though, and about to split.  What to do?  While visiting a local stone shop, we mentioned this, and the owner cut and polished a nice piece of granite for $60.  Small pieces of granite (too small to be used as counter-tops) are considered "scrap" and this was found money for him.  I painted the hardware (which was plated - and the plating coming off) with a "hand hammered" paint and then re-installed.  The result?  A nice sideboard that makes a great serving station as well as storage for china.

But what to do with that bent oak top?   A trip to the lumber yard and we have two pieces of oak 1x2 to screw into the bottom to flatten it out.  Carefully screwing it in, it doesn't crack.  We cut it to length, and borrowing a router, routed the sides to match the front and rear.   It makes a great top for.... 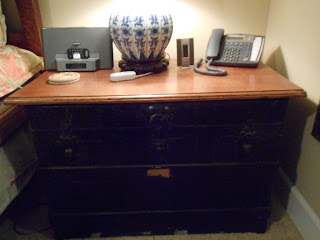 A nightstand made from an abandoned trunk and a discarded oak top.

... an antique trunk we found in the trash room at Hunting Towers Apartments nearly 30 years ago!  Not only does this make a good nightstand, the trunk also holds all of our Christmas ornaments.  Total cost:  $0. 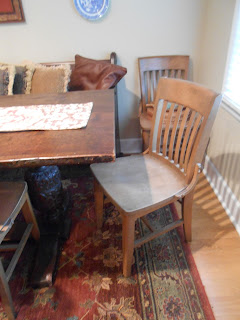 
This old school chair (part of a set of six) is solid oak, from a local "junk shop, $200 the set.  Along with an old church pew ($150 plus cushion from churchpewcushions.com) and an antique oak table hand-me-down, we have solid seating for 12. 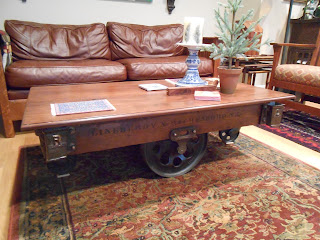 Lineberry carts are fun and practical.


This next piece is fun.  Lineberry carts were used in the mills and factories on the East Coast from the 1800's until the 1980's.   For all I know, some are still being used today.   They are indestructible, with sold cast-iron wheels - they weigh a ton (well, a quarter-ton, anyway).  This is a real cart, by the way - they are so popular as coffee tables that the Chinese are now making fake knock-offs that are not nearly as sturdy, or as interesting.

We saw this one, with a rustic cherry top at an antique mart in Atlanta on the last day.  $300 and it was ours.  It took three people to lift it into the truck.  Fortunately, it is on wheels.   It has that post-industrial chic along with that woodsy Mission look.   It will outlast me - at a price that is pretty modest. 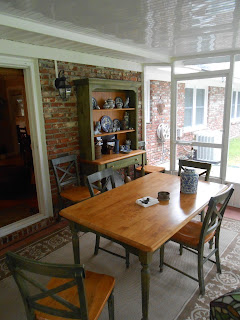 
Used furniture is a good bargain.  If you can find a piece "as new" it can be had for less than half the price.  This dining room set was bought from a friend and now graces our rear screen porch.   Dining outdoors is a lot of fun - sans mosquitoes.  Regular coats of Johnson's paste wax (top and bottom) keep it from disintegrating in the humidity.

This is just a sample of some of the "finds" we've had over the last few years.   The point is, while it is fun to get "everything all at once" and spend thousands of dollars at IKEA buying molded particle board, it is not much more expensive - if in fact, not cheaper - to buy solid quality furniture that will far outlast IKEA or other particle-board furniture manufacturers.   And it will be far more fun and interesting furniture as well!

Particle board is NOT furniture!