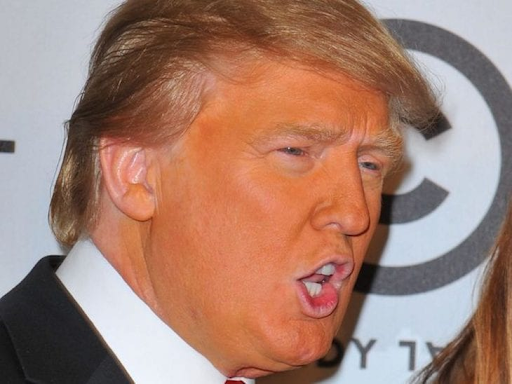 With his orange skin he sort of looks Martian, but that's not what I'm getting at.


Donald Trump will send us to Mars.  Not by government edict or by funding NASA.   He will push us there by adding to the evolutionary imperative to become a space-faring species.   And in this regard, he is not alone.   Vladmir Putin, Rodrigo Duarte, Erdogon, and all the rest of the new dictators will provide impetus to leave planet Earth, simply by making Earth that much more an unattractive place to live.

Or at least, that is the narrative a lot of people subscribe to.   Colonization of Mars has been a dream of many people, such as Elon Musk, who claims it can be done within the next few decades.   The question remains, of course, why would you want to colonize such an inhospitable world when a perfectly good one is sitting here, that just needs a little fixing up.

And the answer they provide (and very straightforwardly) is that it is too late for planet Earth and that Mars would give mankind a "second chance" and insure the survival of the race, after the inevitable global conflagration destroys our civilization or indeed our entire species (if not the whole ecosystem).  Raised on a diet of dystopian "end of the word" movies, it is not hard to see why they feel this way.

The technical problems of going to Mars, establishing a base, and colonizing are mere technical problems, which means they are mere money problems.  Throw enough money at Mars and you could build a colony.  And like the Jamestown colony, you might come back in a few years and find everyone dead - not from external forces, but from internal ones.

While some dreamers posit that life on Mars would be a heaven-on-Earth, the reality is, it would be like living on a totalitarian military dictatorship. Depending on your political views, which people project onto a Mars colony, either it would be a multi-cultural wonderland like on Star Trek, a technocracy populated by atheist PhD's, or an all-white enclave with no messy religious nuts, populists, or other weak thinkers. Or perhaps some combination of the three.

But none of that is likely or even possible. When you live on a planet where each breath of air has to be manufactured, there is little wiggle-room for malcontents, slackers, victimhood, or the like. Every person would have to work, likely at a number of jobs, just to keep the place going and keep from dying at a moment's notice.

You would not have a choice of career. Your job would be assigned to you, and likely you would have to multi-task with others, so that no one person was indispensable to the colony Your life would be tightly regulated. Things like showing up late for work or stealing food would be serious - perhaps capital - crimes.  You could not quit.  You could not leave.  You would have to obey whatever mandate set down by the ruling body.  Individualism could not be tolerated. Those who disagree would be sent to the air lock - sans space suit.

And speaking of ruling body, what sort of government would we have on Mars? It is doubtful that a freely elected Democratic form of government would prevail. We could not have a system where people just vote for more oxygen. Similarly, a monarchy or dictatorship would not work, as the mandates of one person would likely cause the colony to fail - as one person's opinion can and often is, wrong, as the history of dictators and monarchs regularly shows.

The real nub of the problem is how would we govern ourselves in such a manner as to provide a voice to the people living in the colony while at the same time keeping in check the tendency for people to vote themselves a raise whenever they feel like it. And quite frankly, there would be little time to waste with debates, politics, voting, and whatnot. People would have to work together toward a common goal or die.  You could not tolerate youthful indiscretions, petty crime, vandalism, and all the other crap that we take for granted on Planet Earth.  Mars ain't the kind of place to raise your kids and not just because it's cold at hell.

The harsh conditions of living on Mars go beyond just struggling for air, food, and water. There would be no resources or facilities to care for the mentally retarded, the mentally ill, the old, the lame, the crippled, the criminal.  Resources could not be squandered for jails, mental hospitals, retirement homes, and the like. Euthanasia would not be some debated philosophical theory but a daily reality - and applied not only to those unable to contribute to the colony, but to malcontents, slackers, revolutionaries, and whack-jobs. There would be no room for conspiracy theories and other nonsense.    Clearly no room for people who think the moon landing was faked.   Out the air-lock with you!

This may sound unduly harsh, but the reality of a colony on Mars isn't really appreciated by most folks, as most folks don't understand technology and more precisely how much we are dependent on our environment here on Earth to provide the technology we have.

Manufacturing even the simplest of items on Mars (or on the Moon) would be staggeringly difficult.   Take one manufactured item which would be a staple for Martians - the space suit. To work outside your envirodome or subterranean (submartian?) lair, you would need a space suit, which would wear out rather quickly.  No problem, you say - you just make a new one or repair the old one.

But think of all the materials in a space suit - particularly the plastics and elastomeric synthetic rubbers, polycarbonate plastic for face shields, and what not. These are all made from crude oil, directly or indirectly.  Mars has no oil, having no millions of years of plant life decaying and forming crude oil pockets. What's more, even if you could create some synthetic oil from soybeans or use latex from rubber plants (grown indoors at great expense) you would need a network of chemical plants to produce the staggering array of raw materials needed to make that space suit - as well as the manufacturing plants to take these raw materials and make helmets, gloves, seals, hoses, and all the other parts a space suit requires.

Metals are no better.  Sure, the "red planet" is mostly iron oxide. But to make even crude pig iron would require a staggering amount of energy.   You'd need a nuclear plant to start with - and how do you cool that without a lot of water?   The cost of transporting all of this heavy machinery to Mars would be incredible.   Think about it - packing up a nuclear plant and just shipping it to Mars.   Or acres of solar panels.   It is the same thing.

Every little thing you would need in life would have to be imported. Electronic controls, semiconductors, machinery, tools, lighting, wiring - you name it.  And Earth might get tired of the cost of all of this. Technology doesn't exist in a vacuum, but is the result of thousands, millions, and billions of people working in concert together. Building complex machinery isn't a matter of one backroom tinkerer puttering around and making things The things such a person would make require raw materials and parts which other tinkerers make.  Each advance in technology is rarely the result of one man with a great idea, but rather the availability of technology and materials which makes certain ideas possible

Mars in an inhospitable world for more reasons than merely lacking atmosphere and water.

Oh yes, the water.  Sure there are polar ice caps and perhaps billions of gallons of underground ice.   The problem is, while that seems like a lot of water to us Terrans, it is a drop in the bucket compared to how much water we have here on Earth - or what Mars had in the past.  The idea that we can "Terraform" Mars into an Earth-like environment is pure fantasy.   We would have to import enormous quantities of water first, and even then would have to deal with the same problem that caused Mars to turn to a desert in the first place - the lower gravity and lack of a magnetosphere.

So there is the irony.  Our inability to govern ourselves on a planetary level is the major motivation for many to pine for a colonization of Mars.   But before we could colonize Mars, we would have to come up with a better way of governing ourselves, as the harsh conditions on Mars would not tolerate the sort of inefficiency we have here on Earth.