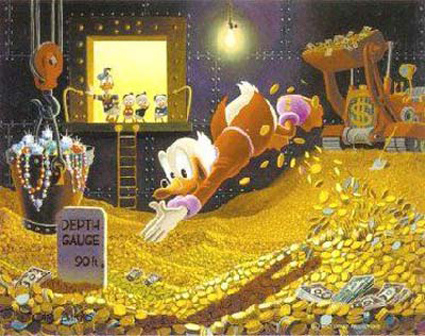 Is wealth itself evil?  There are a surprising number of Americans who would say, "Yes"!


A friend of mine on the island is a far-left Liberal.   Nothing wrong with being liberal, of course, until you take it to wacky extremes, or let mantras and political slogans replace logical thinking.   This goes for you wacky conservatives out there, too!  Both are people who believe in simple solutions to complex problems.

Anyway, they routinely decry wealth as being evil and barf-up the stuff they hear in the news about how "evil" the "1%"er's are and how millionaires are bad people.

Oh, but they were.   Since both husband and spouse had government pensions, they were pulling in over six figures annually just in pension income.  When I pointed out that the equivalent investment to support such an income stream (using the 4% or 5% rule) would be well over two million dollars they simply refused to believe it.

It takes surprisingly little money or income to be in the top percentile of income in this country, which is more of an illustration of how even our incomes are than how uneven they are.  Our highest tax bracket in this country is around 40% and applies to people with incomes of $400,000 and higher.   The income tax brackets are, if you look at it, crowded along the lower end of the spectrum.   People making millions (if not hundreds of millions) a year theoretically pay the same rate as a moderately successful Dentist (but in reality pay less).

But of course, there is a big difference between someone living comfortably and someone awash in a sea of money.   Someone making a hundred grand a year might have a nice car or a nice house but they are not players in the world market.   People who have hundreds of millions or billions (thousands of millions) of dollars are in another class entirely - and by the way, they are not paying in the 40% tax bracket.

Is such an "obscene" amount of wealth evil?   Well, think about what it means to have that much money.   Sure, it means you can own a house on the Mediterranean and a 200-foot yacht as well as a condo in a high-rise in Manhattan.   And yea, it means you have an army of staff or hired help to maintain it all.   But beyond a certain point, you can't spend the money fast enough to spend it all in your lifetime.   You have dynastic wealth, which in and of itself can be a full-time job.

For starters, you generally don't acquire or keep such a level of wealth merely by spending it or by putting it under a mattress or in a savings account.   You have to manage wealth and invest - which is likely how you got to be wealthy in the first place.   These hundreds of millions or billions are not sitting around in the Scrooge McDuck Money Vault, but are invested in various enterprises, stocks, bonds, and whatnot.  In fact, your "net worth" - like anyone else's - exists only on paper.   Your money is tied up in investments, not sitting around for you to spend.

And this is a bad thing because...?   Even from the spending side, when a billionaire buys a new watch, they end up creating jobs for a watchmaker, which is likely a big company with many employees.   These employees in turn own cars and houses that require the hiring of other people, which in turn requires hiring of other people and so on.   The selection of a watch for $50,000 may seem "wasteful" to most of us (who quite frankly could not tell such a watch from a $10 Wal-Mart knock-off, or frankly even care.) but in reality it is just a buying decision like any other that sets of a chain of events that drives our economy.  One guy buying a $50,000 watch or 1000 guys buying $50 watches - the net effect to the economy is the same.  And who the hell wears a watch anymore - other that people showing off wealth?

The argument is often made, on the far-Left, that we should "redistribute the wealth" by taking money from the wealthy and giving it to the poor.   Worse yet, they often argue that good and noble things should be dismantled and the money given to homeless people.   The money spent on the moon landing would have fed millions of homeless people!   Perhaps true, but then we wouldn't have landed on the moon, and our homeless are the fattest in the world already.

Liberals like to toss around the quote that a "society should be judged based on how it treats its weakest members" - which it attributed to Pearl S. Buck, the Pope, Hubert Humphrey, Gandhi, Jimmy Carter, or Nelson Mandela, depending on which website you are reading it on.   Like so much else, however, it was either misquoted or mis-attributed.  But let's face it, if you are an unemployed pot-smoking bum, it is a fine sentiment!   And that is the sort of folks who trot out this quote time and time again.   Society owes us is the basic premise.

Maybe this represents a noble sentiment,  but it is one that can be taken to extremes.   Merely throwing money at poor people - an idea still being seriously considered in places like Finland isn't going to make them wealthier.  Poverty isn't about the balance in your bank account, but the attitude in your brain - as lottery winners routinely demonstrate.  The problem with this model is not that it won't actually help some people improve their lives, but that if taken to extremes, will damage society as a whole.

Taking away the incentive to exceed - yes, even the incentive to exceed at obscene levels - removes the incentive to greatness.   We've seen firsthand what happens in Communist societies where "everyone is equal".   First of all there are still some folks who are "more equal than others" and not based on the merits of their achievements, but on their connections and their ability to brutally cling to power.   The rest of society lives like serfs, not rewarded for innovation or achievement, and not punished for lack of either.  It is a dull, dreary and fear-filled existence.   It is merely existence.

People living in such countries looked enviously at the West, with its cornucopia of consumer goods and foods, as well as outlandish behaviors, arts and culture.  The incentive to innovate pushes people and companies to come up with new ideas and new products.   A restaurant in the West cannot survive by merely providing bread and water - it must cater to the needs and demands of customers.  If it succeeds, it becomes wildly successful.  If it fails, it goes bankrupt and people lose everything.

And yes, this means we end up with "successful" restaurants like McDonald's, which serves unhealthy overpriced meals that have the texture of a soft sponge and inoffensive taste.   This is what is wildly popular with a lot of the country - hence the success of the chain.   If you don't like the food, don't go there.  But to decry it as an "excess of capitalism" based on your personal taste preferences is idiotic.

Poverty is not caused by wealthy people taking away money from the poor, but rather by the poor handing over their hard-earned cash to the wealthy.   National People's Radio recently ran a series on how owners of trailer parks are screwing their tenants.   This should be a surprise to anyone?   Trailer parks are one of those shitty deals offered to the poor - a raw deal you should be able to dissect while driving by the park a quarter-mile away at 60 miles an hour.

As I noted in another posting, it is a pretty dumb proposition.  You buy a trailer home (which is worth nothing, yet they pay thousands for them) and then pay "rent" in a trailer park.   Over time, either the place gets so run down as to be unlivable, or the rents go through the roof, or both, and your only recourse is to walk away from the $10,000 you have "invested" in a trailer.  (And yes, NPR calls owning a trailer, "The American Dream of Home Ownership" as opposed to "a place to crash").

The point is, the wealthy got rich not from "ripping off" the poor, but because the poor were dumb enough to think this was some sort of bargain.   They wanted a trailer rather than an apartment (which you can move out of on 30 days notice) because they wanted to keep a bad-ass dog and a wrecked Camaro in the weed-filled "lot" their trailer was parked on.  Or maybe because they've wrecked their credit so badly they can't find a landlord who will take them.  They didn't do the math on this, and thought it was some sort of bargain, which is was - a bad bargain.

Until people stop snapping up shitty bargains, there will always be disparity of income and wealth (and there is a difference between the two) in this country.

And frankly, that is the only thing the wealthy are really are scared of - that some day people will wake up and figure out that they don't need to bite on shitty deals.

(Wacky Liberals chime in here:  "But they don't have a choice!"  We all have choices, and no, buying lottery tickets and getting payday loans are not things you have to do in life).