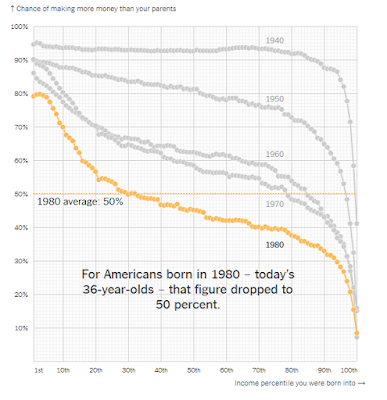 Does this chart show income inequality or progress?

A recent article in the Sunday New York Times posits that the American dream is indeed dead and shows an alarming graphic to emphasize the point. At first this seemed like a damning indictment of our American way of life until I started to study the chart in detail.

As I have noted before, the first thing to investigate when challenging any argument is the underlying premise. And here the premise is what exactly constitutes the American dream. In recent years many politicians have posited that the American dream is that of home ownership. Granite countertops and stainless steel appliances are the new American Dream.

The author of The New York Times article argues that the American dream is to earn more money than your parents and uses this as his metric for analysis. I guess there are multiple definitions of what constitutes the American dream. To me it always has been the ability to pull yourself up by your bootstraps and succeed on your merits in a free society.

According to the article's author, David Leonhardt, the American dream is now dead as illustrated in the accompanying graph which alarmingly shows that the odds that a child will earn more money than his parents has declined precipitously since the nineteen forties where the chart begins.

However studying this chart in detail causes me to scratch my head. The chart does not plot actual incomes of individuals or groups but rather the "odds"of earning more money than your parents (the y-axis) based on your parent's income (on the x-axis) for various decades from 1940 to 1980. This is, to say the least, a very odd metric.

One thing the author doesn't take into account, is that as incomes have risen since the Great Depression how it is harder and harder for working class people to earn more and more money indefinitely. In order to reverse the trend in this chart, each successive generation would have to make more and more money for the same amount of work.

I'm not challenging the source of the data that here, as it is hard to determine where he's getting his numbers from.  Although one has to question where such data could be obtained. The Internal Revenue Service keeps track of average incomes and various other metrics in this country, but to my knowledge does not keep track of a child's income relative to their parents.  How indeed would that be possible?

Thus, it would appear that the source of his data would have to be from surveys, which is self-reported data and thus suspect. To begin with, do you really know how much money your parents made? I know I certainly don't. I can only tell you what was left after my parents died, but not what my father's salary was during his working life.

Also at what time during the working life do you you chart this data? If you are measuring the salaries of someone in their 30s versus the income of their parents in their fifties or sixties, of course they will make less money. And for the last line on the chart, which we are supposed to be alarmed about, represents data for people from 1980, which in turn represents the youngest portion of that chart, who of course have not made as much money as their parents - just yet.

I can only presume he is adjusting the dollar amounts for inflation. Of course adjusting for inflation is always a difficult task as today we have many more consumer goods at much much lower prices than we did in the past. As I've noted before, in the 1970s you would have to pay $500 for a poorly made American color television with a 25-inch screen. Today a television with far more capabilities can be had for only $100 or so. For $500 you can get the television they will occupy an entire wall of your house

Kurt Vonnegut ironically addressed this issue in his book Player Piano. That book, which was a science-fiction indictment of automation in industry, made the ludicrous proposition that workers today are more wealthy than Napoleon Bonaparte because Napoleon never owned a snowmobile. While that argument is somewhat ludicrous it does raise the point that the standard of living of even the poorest person today in many ways is better than even wealthy people in the past. We may not make as much money as our ancestors but our level of healthcare and our standard of living is much higher. Comparing incomes from our era to those of the Depression era is difficult at best.

In the article accompanying the graph, the usual arguments are made regarding income inequality and how awful things are in America that we are so poor nowadays. The author clearly sets out to show that income inequality has gotten worse over the years and thus prepares a graph which shows what he intends to prove.

However one could draw other conclusions from this graph which are also valid, namely that as incomes rise it becomes harder and harder for each successive generation to exceed the income of the previous generation, as the value of Labor is someone fixed and one cannot expect indefinite raises for what is, in fact, a commodity of finite value.  In addition, as the population grows, the supply of labor increases, further depressing its value.  And as women have entered the workforce and people work longer the supply increases even further, depressing the price of labor - even skilled labor.  This is less an indictment of "wealth disparity" than the law of supply and demand.

Another aspect of the increase in population in the United States since 1940 (which has nearly doubled) is that increased population does mean that a standard of living, in terms of housing affordability, is affected. Yes, I have made more money, even adjusted for inflation, then my father did.  However, I cannot afford to live in the house on the lake that I was raised in, as the cost of that property has gone up substantially due to the increased number of people in this country and the finite amount of real estate available.   On the other hand, the quality of my life is arguably better in many other areas, in ways that cannot be measured by income alone.  Regardless of how these numbers were calculated, the next generation will always have a smaller slice of the pie with regard to the land and living arrangements, so long as population increases.  This does not mean, however, that their standard of living is less, only different.

For example, my Dad had only one dial phone in the house.  So I guess that makes him "poor" and me "rich" because by age 40 I had cell phones, a landline, cable television, and high-speed internet.   I am being facetious here, of course, but it illustrates how hard it is to compare our generation to previous ones.  For example, I was never at risk for Polio, whereas my parent's generation was.   Saying things are "better" or "worse" in a chart based on income alone is specious.

One interesting footnote on this graph is that it illustrates how difficult it is for the children of the very rich to exceed their parents income. This is probably due to two reasons. First, as I have discussed before, the children of the very rich tend not to be very ambitious. If you are set to inherit a million dollars the day you were born, there is little to be gained by risking that in business ventures or by working. Second, if your parent's income is very high then the bar for exceeding that income is that much higher.

But again this illustrates my point, namely that the more money your parents make the harder it is to exceed that amount.  Thus, as  incomes have generally risen over the years it becomes harder for each successive generation to exceed the income of the previous one. This is not necessarily a sign of income inequality, but actually progress.

One final note - statistics are fine and all, but negate free choice.  I exceeded my Father's income level (by my best estimate - he never showed me his pay stubs!) because I chose to stop smoking pot and got an Engineering degree and a Law degree.   My siblings made less than my parents (or at least had a lesser lifestyle) because they made different choices in drug use and college majors.

The New York Times loves a good victim story.  And the narrative of so many of their stories is that it doesn't matter what you do in life as the deck is stacked against you.   So you might as well not bother trying at all until the government steps in and straightens things out by paying off your student loans or providing a guaranteed minimum income or whatever socialist dream du jour is being touted.   This is, of course, learned helplessness which can cripple an individual.

The New York Times is selling a lot of claptrap that is far past its "sell-by" date.  We are in a new era, and it is clear that a large portion of this country isn't interested in Socialist solutions to our nation's problems, if indeed we even have major problems compared to the rest of the world.   Left-wing thinking is what lost the election for Hillary - not income inequality.
Newer Post Older Post Home
View mobile version