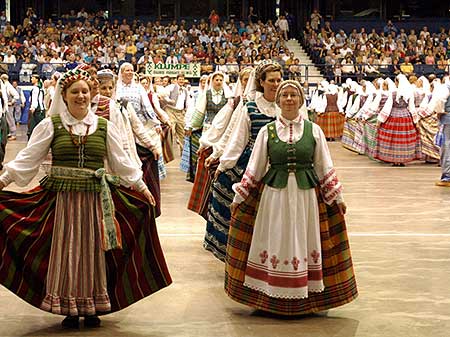 Are you defined by what your ancestors or relatives did?  Or are you your own person?
Moreover, who "owns" your culture?


As I noted in an earlier posting, culture can be a trap.  While dressing up in the costumes and traditions of your ancestors can be an amusing hobby, if you use these cultural trappings to define who you are as a human being, it can be a trap - and a cop-out on life.

In a way, culture is one of those roles we choose to play, if we are particularly insecure and not sure what we are supposed to do in life.  It is a akin to the political styles that people adopt, off-the-shelf, and then wear like a suit of clothes.

For most, it is a harmless exercise.   The O'Brien family, for example, paints the guest bath Kelly green and decorates it with leprechauns and paintings of County Cork.   Once a year on St. Paddy's day, they dress up, get drunk, and affect horrific Irish accents.   But of course, they've never been to the "home country" in their lives - they are several generations and a whole lot of interbreeding from being pure Irish.   It is an affectation and hobby, perhaps a harmless one.   They adopt this identity as a means of belonging, which I guess is a human thing to do.

But to view humans as breeds of dogs, on the other hand, is sort of  repugnant.  And yet there are forces today at work - on the Left of all places - who want to pigeon-hole us into cultural cubbies and then nail down the hatches to keep us there.  This is, of course, wrong on all levels.

The latest outrage on campus, in addition to "safe spaces" (a college campus is not a "home" it is a four-year stint at academia.  You go, you get a degree, you leave) is the concept of "cultural appropriation."

Where all this nonsense is coming from and why it is hitting several college campuses (mostly liberal arts colleges) all at once is a good question.   A conspiracy theorist might argue that some outside force is trying to destabilize the United States by un-melting the melting pot.   But we don't believe in conspiracy theories here.   Mass-hysteria is a more likely culprit.   The next thing you know, these kids will be hoarding tulip bulbs.

Oberlin college - home of the worthless, overpriced Liberal Arts degree - is keen on this concept.   The latest "outrage" is that a student of Vietnamese descent is upset that the cafeteria tried to "culturally appropriate" her cuisine by attempting to make a Vietnamese sandwich and (shock! horror!) not quite getting it right.

Instead of just shitty cafeteria food, this is considered a micro-aggression against her culture because it ain't the way mama-san used to make it.   Here's a clue:  Cafeteria food is never made the way it should be.   Are you going to tell me the tacos are authentic Mexican cuisine?

This is, of course, nonsense.   If "cultural appropriation" means this, then every Taco Bell across America is guilty of cultural holocaust against Mexican-Americans.  A taco made with Doritos chips?  That's just wrong - and politically incorrect!

The reality is, of course, that "American" cuisine is a mixture of the foods from all over the world, often made by substituting local ingredients, or often just re-made to pander to American tastes.  And every country on the planet does this.  The Japanese make pizza - and put corn on top.

You don't have a "right" to your culture or the "right" to prevent others from cooking "your" food.  If we go down the road, then Italians can no longer make pasta - as it was a Chinese invention.  It is just ridiculous.

But on a personal level, culture is a big trap.   Once you start viewing your entire life through the filter of culture, you limit your possibilities.  This young lady at Oberlin can't just have a laugh at the cafeteria's attempts to make Vietnamese cuisine, but instead has to be outraged at it.   She has to view her life as that of a Vietnamese-American and not just a human being.

And sadly, this sort of behavior will only insure increased marginalization over time.   The biggest thing holding back black people in America is this invented "ghetto culture" complete with its own made-up language, social traditions, ersatz Christmas, and horrific normative cues.   When you grow up in an environment that celebrates criminality and demonizes authority, your outcomes are going to be limited.

Native Americans, or Indians, suffer from the same problem.   They are tied to their "native lands" in reservations that often are thousands of miles from their real ancestral homelands.  Despite the proliferation of casinos and other money-making enterprises, the standard of living is far below the norm in the United States.  If I was born on a reservation, the best thing I could do would be to leave.

But to even say that is heresy.   According to some folks, people have an obligation to remain in their culture traps, even if they limit their opportunities in life.   Born in the ghetto - stay in the ghetto.  It is a neat way of keeping people down - from the Left of all places.

Sure, you should honor traditions and culture.  But don't let it be a trap controlling your life.   Because when you sit down and start to analyze a lot of what we consider to be "deep cultural traditions" you may find they are less than a century old, some even less than a few decades old.

Pretty silly to let them control your life.
UPDATE 2020:   The Bánh mì sandwich is, itself a piece of "cultural appropriation" as it uses a FRENCH BAUGETTE for bread - a relic of French Colonialism.   Hypocrite much?
Newer Post Older Post Home
View mobile version