Irony is Lost on Elizabeth Warren 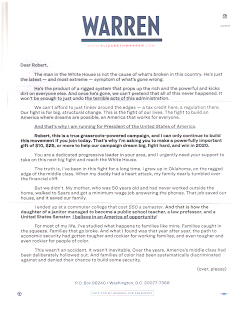 It is possible to rise above poverty to run for President of the United States.   That doesn't mean we should give away billions of dollars to people.  Click to enlarge.


I got a letter from Elizabeth Warren today - no doubt she read my posting about Pocahontas.   It was a moving letter, in that it told of her struggle to rise from poverty to become a lawyer, a law professor, a Senator, and now a Presidential candidate.   It is true that in America, anyone can be President (and our current President is proof of that!) and that even if born into poverty, if you work hard and try, you can succeed.

Somehow, this has been translated over the years into, "If you come from a middle-class background, you don't have to try, and you should get free stuff!"

She recounts how after her "Daddy" (how down-home and gee-shucks!) had a heart attack, her mother went to work for Sears at a minimum-wage job.  Oddly enough, she didn't attempt to unionize the Sears workers or go out on strike.  Warren went to a "commuter school" for $50 a semester.  Through a lot of hard work and sacrifice, she got where she is today.

This is a message that resonates with me, as I worked hard - for 14 years - to go to "commuter school" and although tuition was more than $50 a semester, between my employers and some student loans, I managed to pay for it.  I didn't ask for a handout or free tuition or loan forgiveness and neither did Warren.

Today, the average student loan debt upon graduation is anywhere from $25,000 to $35,000 depending on which site you look at.   This is not a lot of money for middle-class people or even lower-middle-class or even the poor.   It is the average price of a new car today, and not a very fancy one at that.   Is a college education worth the cost of a car?   I would like to think so.   But there are a lot of stupid degrees from Stupid U. that are not worth even that.

We hear, in the media, in yet another example of Media Hysteria about people with $100,000 in student loans or even folks with far more.  If you go for a graduate degree, it ain't hard to do, as private lenders will let you borrow as much as you want.   And some do, thinking that once they become a Dentist or Surgeon, they can pay this back.  Others get bogus MBA degrees and never even find a job.   These are life choices.   If Warren had decided to go that route, no doubt she would not be a lawyer, professor, Senator, or Presidential candidate.  She made tough choices, worked hard, and succeeded.

Ironically, she wants to make it easier for people to make poor choices and not have to work at all by cancelling the student loan debts of millions - regardless of whether they can afford to pay them back, how much they borrowed, or even whether they have already largely paid them back.  Her reaction to the hard work and toil she had to go through was to put the next generation on easy street.   I don't get it.

The high cost of college isn't alleviated by throwing free money at it - it was caused by free money.  When you tell a student that they can borrow tens of thousands of dollars for college, suddenly an expensive college seems "affordable" and if they have a rock-climbing wall in the student center and luxury student housing, so much the better.   Walking five miles one-way to "commuter school"?   not on your life, baby!

I guess what really disturbed me was the irony that was lost on Warren - the disconnect between her life story of struggle and success and today's generation of whiny kids who borrowed money for useless degrees and now want a get-out-of-jail-free card.   The real hard answers - how to cut the cost of college by cutting the overhead and spiraling costs - is not addressed.  And these costs spiral out of control because funny-money loans allow them to.

"So, what's your answer smart-ass?" you say.  Well, simple, going forward, we need to end Federal guarantees of private student loans and end the bankruptcy exception for private student loans.  Yes, this means private student loans would evaporate overnight.  It also means that "for profit" colleges such as Trump U. would have no mechanism to ensnare the poor and shatter their dreams.   It also means that students would look a lot harder at the costs of schools and make better choices in terms of bang-for-the-buck in college.  Colleges would be forced to compete on price, and tuition would come down.  Get rid of highly-paid layers of Deans and administrators, $40-an-hour janitors and security guards, and the other bloated overhead that is passed on to gullible students who pay for it all with tomorrow's money.

Will this make it harder to go to college?  Yea, sure.   But it also means that people will think harder about this very expensive decision before they blithely sign loan papers that mortgage them for life (well, at least for ten years, anyway).  And yea, it will hit Touchy-Feely U. the hardest, as the demand for degrees in sensitivity studies will decline.   That's a good thing, trust me.

Of course, changing the structure of student loans may require more than the "stroke of a pen" as Warren claims is all that is needed to wipe out a trillion dollars in student loan debt.   But then again, maybe not.  If the President has such powers to regulate Student loans, perhaps she could do this as well.   But of course, the pushback from the private student loan lenders would be horrific.   It would be  a hard thing to do.   On the other hand, the private student loan lenders would love it if Warren had the government write them all a fat check for the full amount due, with back interest paid.  She is choosing the easy route.

Doing the hard thing is usually the right thing - as Warren's life story attests.   Going the easy route - doing things that are comfortable or appear to be comfortable, often lead to discomfort.   You would think, having struggled in life, that Warren would understand this - understand that our struggles define us, and that struggle is often better - always better - than having something handed to us.  We do not appreciate that which is free.

But I guess somewhere along the way she forgot that.  Either that, or she is making a craven, calculated ploy to buy votes.  Sadly, I think the latter, and that pains me, as I thought maybe - at one time - she was the real deal.  I no longer think that, and indeed, I was naive to think that about any politician.
Newer Post Older Post Home