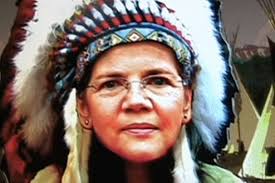 Claiming Indian ancestry at cocktail parties or as a joke on a Census form is one thing, doing it to claim minority status is another.


Elizabeth Warren is gaining in the polls, despite - or because of - her feud with fellow Monty Hall giveaway host, Bernie Sanders.   Yet, I think Trump would be pleased to run against her, if she were nominated.  And if she were nominated, you would hear nothing but "Pocahontas" from the Democratic convention until November.  And it would stick, too.

I mentioned before how claiming Indian ancestry was sort of a wasp-y thing to do back in the 1960's. My Mother, after a few cocktails (which is to say, after 10:00 AM) would blather on about how we were descended from Captain John Smith and Pocahontas, which of course, was nonsense and highly unlikely.   The idea was, back then, that you wanted to claim some sort of pedigree - like a dog - so you could get into the country club or get that corner office in the executive suite.   And to do so, you wanted to be able to trace your ancestry to the Mayflower or some other nice Protestant lineage that let you in the club.

I made the mistake, in third grade, of mentioning this in class, when we did a history lesson on Pocahontas.   I was beaten-up after school for my impertinence.  No one likes a smart-ass.

I noted before how our family on my Father's side is divided as to whether we are of Irish or Scottish ancestry (or as a compromise, Scots-Irish, whatever that is).  The reality is, my Dad became "Scottish" and Protestant in part I think, to advance his career and status in life (hence also marrying a crazy lesbian from a family "with money" - but less than he thought).   People do what they have to do to survive, and back in the day, the big companies weren't putting Catholics or Irishmen in the boardroom.   We had one as President - oh wait, they shot him.   Haven't had one since, have we?  Guess they got that message across.

Of course, you could argue this is all harmless fun. Jews have been "passing" for gentiles for centuries, as it seemed a lot nicer than the Inquisition or the death camp.   Light-skinned blacks have passed for white in the past - and often castigated by other blacks for doing so.   But of course, it goes to the root of the issue - what it is that makes one Black?   Obama was half-white and half-black by ancestry - why do they pigeonhole him as black?  Even people who are not racist, are racist.

But that was back then, this is today.  Back then, you tried to "pass" as another race in order to join the majority in most cases.  Stories of Indian ancestry were cocktail-party chatter, designed to make one look intriguing, nothing more.   No one claimed Indian ancestry back in the day for an advantage.

That changed.  Starting in the 1960's, "affirmative action" and other programs started tracking people by race, and efforts were made to diversify schools, factories, academia, and the board room.  Suddenly, there was a demand to have for minorities on the board of directors, to show your new egalitarian credentials.   Being a minority - or being able to claim minority status - had some limited advantage (although in reality, it was still far better to be in the majority).

Better yet, if you could be classified as a minority but appear, act, and be "one of us" that made you even more appealing to the race number-counters.  So they wanted an "articulate black" to be represented on the corporate board or on the faculty of the school.  They didn't want Reverend Al Sharpton or Malcom X.

Back then, every government form had a section with "race" boxes to be checked off.  If you were white, you checked off "none."  Just kidding.   It was kind of odious back then, and even today, where the government wants to know your "demographic" on almost every form.   And there are promotions if you can fit into one or more of those demographics.  As a "small business" I could get a "set aside" from the firehose of government contracts.  If I was a woman-owned or minority-owned business, so much the better - and readers tell me they know of businesses put into the name of the wife or a minority partner to garner such business.   If only I was a transgender lesbian Eskimo!  I could have gotten contact after contract.

But speaking of Eskimo (or Inuit), my brother once put down "Eskimo" on some government form as a joke (he was high at the time, likely) and there was, of course, no consequences, as he was not claiming any advantage as a result.  It may have been funny to "mess with the man" and screw up their survey demographics (why one Eskimo in central New York?  I am sure the IBM 360 had a meltdown over that) he wasn't committing any sort of crime as a result.

Enter Elizabeth Warren.  She claims - and I believe her - that her purported Indian ancestry was something handed down over the generations, much as my Mother's story was.  Cocktail party chatter and family folklore and little more.  But she checked off the "Native American" box on more than one form in her life, and allowed her employer (Harvard) to laud her as their first "Native American" faculty member.   She obtained some kind of advantage from this false claim.

And false claim it was - and she knew it.  She did not grow up on a reservation or come from a deprived or disadvantaged background.   She didn't have to struggle to leave the reservation and end up at Harvard.   Her inauthenticity not only is scandalous, it is a slap in the face to any racial minority who did have to struggle to get ahead against long odds.

And yes, it did and does matter.  By claiming her as "minority faculty" Harvard can use her head-count to show they are complying with affirmative action, which they did for nearly a decade.   By claiming Indian ancestry, Harvard didn't have to seek out a minority candidate to fill that seat.   Someone is not on the faculty of Harvard as a result of this lie.

Now, several left-leaning newspapers have "investigated" this and reported that Warren obtained no advantage from her false claim (although only one appears to have investigated whether others were disadvantaged as a result).   Harvard itself claims that native ancestry played no part in her hiring, claiming faculty members viewed her as "white".   And as we know, Harvard is a very right-leaning Repubican institution which would not "whitewash" (sorry) this matter.   Harvard, however, clearly claimed her - on Affirmative Action forms - as a minority, and lauded her as such in school publications.  Harvard clearly obtained an advantage here and had incentive to hire her and retain her.

Perhaps this is a tempest in a teapot, but it is a scandal nevertheless, and one the Republicans will "run with" all the way to November.   If it was a Republican with the same issue, it wouldn't have mattered as we expect them to all be lying self-serving sons-of-bitches.  But a Democrat?   Much less one who is out to help the little guy?   That's what makes it a scandal right there.