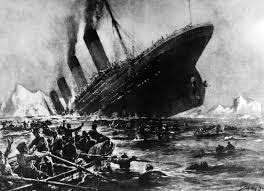 The Titanic was the wonder of the age and was going along just perfectly fine, until....


There has been a lot of ink wasted on the Titanic. What caused it to sink?  There are many conspiracy theories, some mild, some wild.   Some folks argue - with some evidence - that a coal fire was taking place in the bunkers and this was partially to blame for the mishap.  Others argue the ship wasn't even the Titanic, but its sister ship, the Olympic which was launched shortly before.  Why that makes a difference, I don't know.  Sunk is sunk.

What is clear that metallurgy was to blame - the primitive construction techniques of the time - riveting mild steel plates together ensured its demise.  Poor metallurgical quality of the steel plates and rivets, plus icy-cold North Atlantic water meant that even a grazing impact with an iceberg meant a huge rent in the side.

I've often wondered why they didn't do more to save the ship.  Perhaps haul a canvas sheet under the hull to plug the leak, a technique known traditionally as "forthering".  I'm guessing they didn't have a lot of sailcloth on the Titanic, or that the water pressures involved would have shredded the sails quickly if they had tried this.  Another idea would be to put the ship in reverse - full speed - and head toward the nearest ship - the SS Californian.  The suction from reversing might pull water from the bow, or at least slow the leakage.  And the closer they got to the Californian the greater the chance of rescue.  Failing that, why not take all those useless life preservers and lash them to deck chairs and build rafts?  That would save a few lives.   Or have some of the crew fold out the canvas collapsible life boats properly?  It just seems like they could have done something other than to wring their hands and resign themselves to their fate.

But prior to the collision with the iceberg, all was well.  People were riding on the state-of-the-art ship of the sea, sipping champagne in the dining room and all was well - in fact, fantastic.  They were going so fast that for sure they would capture the blue riband!   But in a matter of moments, it all fell apart, and in retrospect, people can point to the signs of the demise, starting at the drawing board with the design, carrying through to the shipyard and the construction, and finally to the night in question and decisions made as to how to navigate.   In retrospect, we all saw it coming, right?

In fact, historically, quite the opposite.  Before each crash, stock markets are at all-time highs.  Of course, stock markets are usually at all-time highs more often than not, as stocks (along with everything else in the world) go up in value over time if nothing more because of inflation.  So when you read in the paper that the market has gone up, that is no big deal - the overall trend, since time began, is up.   When you read it is at an all-time high, also not a big deal - more often than not, it is.

Perhaps the only period the latter sentiment was not true was from 1929 until after World War II.  The high of 1929 was not exceeded until after then - decades later.  But in general, markets go up over time, so it is no big deal when the financial press reports "stock market at all-time high!" any more than the weather report says the sun is shining.

Will we have a recession - or a crash?   Well recessions are also a part and parcel of the pattern of markets and economies, and one should expect markets to contract on occasion.  People get exuberant and over-extend themselves, or world events intervene (such as the Arab oil embargo of 1973).  So just as it is ridiculous to be amazed that the market has gone up, it isn't surprising or unpredictable that it will go down as well.

If the only indicia you use to measure the strength of the economy is the DJIA, it would be like judging the state of the Titanic by the knot-meter.  Full steam ahead!  That means everything is going just fine - right?    But there are other factors to consider.  The transportation business is in recession - trucking companies are going bankrupt, truckers are out of work, only a year after demand for truck drivers skyrocketed.  CSX is shipping less than before, as is FedEx.   The car companies are using "employee pricing" to move cars out of the showrooms, as sales - to real consumers - have declined in the last years.  Employee pricing and fleet sales to rental car companies are two acts of desperation last seen in.... wait for it... 2007.   All the major car companies are predicting slower sales for 2020 and beyond and are cutting back on shifts at manufacturing plants. This is the robust rocket-economy?

Some European countries are already in recession, and it looks like China's growth is tapering off as well.  Oh, and the trade war?  It ain't over yet, as billions of Chinese and American products are still be slapped with tariffs as high as 25%.

We could also mention massive debt loads - but again, consumer debt being at "an all-time high" is another one of those statistics that may be misleading, as debt will increase over time, if nothing more due to inflation.   Of course, one interesting statistic is that consumer debt is today higher than it was in 2007 - it took that long for people to recover.   Another factor, which is more inflation-neutral, is debt-to-GDP ratio, which also has been increasing over time.   If interest rates rise - and what other direction can they go in? - servicing this debt will be difficult for governments, corporations, and individuals.

Higher wages and lower unemployment might seem to be a factor favoring an expanding economy.  But bear in mind we saw the same thing happen during the Clinton era.  Unemployment was so low, it was hard to hire anybody, and about that time, I gave up on running a "firm" and went back to solo practice.  I found the more people I hired, the less money I made and the more hassles I had.  I even briefly went back to work for an odious law firm - because they were throwing around hefty salaries that were more than I was making as a solo practitioner.  But the "dot com" boom went bust (yet again) as none of these companies -  like Pets.com - were actually making any money.   The "dot com" practice I joined was closed within a year.

Oh, yea, that.   There are an awful lot of tech-that-is-not-tech companies that are hemorrhaging cash and running out of investor money to set afire.  The Bird and Lime people have a weird business model - buy electric scooters and then just leave them laying around to be run over, abused, tossed in dumpsters, the ocean, or canals.   Somehow they hope to make money, "EBITDA" style (which means you are not making money, but could, if only you didn't have to pay taxes, interest, your debts, or your employees or suppliers!).   Many of these companies, which are little more than "apps" are retracting already, laying off people, and consolidating operations.  It is like watching "Zipcar" again in slow-motion.   Eventually all companies have to turn a profit, as eventually investors get tired of losing money.   And we are at a point where even some "successful" new companies are reaching the end of their ropes.  A wave of bankruptcies - in addition to the existing wave of traditional companies going bankrupt - will mean more layoffs, more suppliers not paid, and more people losing money to bad debt and stock that drops to zero.  This in turn causes those folks to spend less, hire fewer, and so on and so forth.  The snowball effect strikes again.

Now, fold in the economic polices of the last three years - massive deficit spending, slashed tax rates, and artificially low interest rates - all factors designed to "goose" a dying bull market for a few more quarters until re-election time.  And this strategy just might work, as it takes markets a long time to collapse, just as it took the Titanic hours to sink.

For the time being, the band can play on, and let the dancing begin.  The champagne is ice cold - it should be with all that iceberg ice available, right?   Why stop the party when it is going so well?   But the party could come to an abrupt halt in a very short period of time.   Which is why I am sitting in the lifeboat as we speak.
Newer Post Older Post Home