Is Lending Tree a Scam? 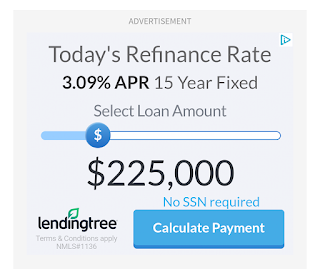 
I saw an ad on the MSN News site that made me pause. It was from lending tree, and they said you could get a low-interest mortgage with "no social security number needed!"   This gave me pause, as it sounded like they were willing to write mortgages to people without any form of identification.   If so, I could take out a mortgage on your house and then pocket the cash.   But that isn't what they meant.

In the past, this was a real problem.   Mark recounted one real estate closing where the sellers were asked for identification at closing.  They said they left their drivers licences in the car.   They went out to the car while everyone else stayed in the conference room.   A few minutes later, they hear a car starting, the screeching of tires, and then silence.   Turns out they didn't own the house that was being sold.   It happens - people try to get loans on houses they don't own, and pocket the cash, or try to sell a house that isn't theirs - and also pocket the cash.   Today, legitimate real estate closing companies usually ask for a form of ID - maybe two - to confirm all parties to the transaction are legitimate.

Lending Tree doesn't lend money.  Their come-on is they will show you competitive rates for mortgages and other kinds of loans.  But people report that when they go on the site and plug in their data - including in the past, the last four digits of their social security number - and hit "enter" the phone rings almost right away.

Turns out, they are merely a leads aggregator, and they sell your contact information to various lenders, who then proceed to call you relentlessly.   If you were "just curious" about competitive mortgage rates, well, too bad for you.

According to some complaints on the BBB, some folks went on the site and "signed up" to get competitive quotes.   A lot of personal information was required, and more than one reported that the moment they clicked on "submit" their phone rang.  Auto-dialers from lending agencies started calling right away.   And the rates quoted were not necessarily advantageous.   And like with Trulia, they just keep calling and e-mailing, long after you've lost interest.

A few complained that lenders did a "hard pull" on their credit, without consent (again, read the fine print) which affects their credit score.  One complained a fraudulent loan was taken out in his name, but that appears to be an outlier (or maybe he is trying to scam Lending Tree - hard to tell).  But mostly, it is just people complaining that all they got out of the deal were calls and e-mails from lenders - not the "side-by-side comparison" they hoped to get.

So, is Lending Tree a scam?  Not really.  But their ads make it seem like you can click on the website and just look at prevailing rates - or apply for a loan through them.   But in reality, all they are doing is acquiring and selling leads, and the leads are weak, my friend!   And the leads are weak because a lot of people who click on the site are like the folks who complained to the BBB - they were just curious about rates, and didn't want their data sold to third parties.   But if you read the fine print, that is of course, what Lending Tree does - they don't write loans themselves.  Hence the name, Lending Tree.

Mortgage brokers and banks want leads.  And once they get a lead, they want to sell them a mortgage.  The last thing they want is people shopping around on interest rate, points, closing costs, and closing fees.   That would spoil the whole party, wouldn't it?

Getting a mortgage or refinancing your house is like buying a car - the folks selling these loans want to make the process as opaque as possible and also discourage you from cross-shopping.  If you buy a car at a car dealer, it isn't until you get to the "closing room" that you find out what the actual price of the car is - and often they try to sneak in extra charges, such as processing fees and document fees and whatnot.  Sometimes they just baldfacedly call it a "dealer fee" as in, gimmie your money.

The same is true for mortgages - either purchase money mortgages or refinances.   Often it isn't until closing day that your find out what the costs are, and by then, you are so worn down you say, "forgetaboutit" and sign the papers, because you want that lower monthly payment, or the house, or the cash-out.

Long ago - 20 years at least - I got a "cold call" from a guy selling re-fi's.   I was in the market, as we had an 11-5/8% mortgage, mortgage insurance, and a swimming pool loan at an interest rate I'd rather not talk about.   He bundled this all together into a re-fi at an attractive rate, but they added on a lot of junk fees.   They sent the closing documents and I said no deal unless they scotched several of the fees, including a mysterious $500 fee that appeared to be just added on.   I still likely didn't come out ahead - you never do as a consumer, going up against someone who closed more loans in a month than you will get in a lifetime.

And of course, I re-set the 30-year mortgage clock as well, which of course meant that I was once again, 30 years away from actually owning my house.

Lending Tree sounded like a solution to all of this - a way of getting competitive quotes for mortgages, so you can compare offers and take the best one.   Of course, if they actually did this, the lenders would race to the bottom to have the lowest rates, lowest closing fees, and lowest overall costs.  And no one makes money from that, do they?

Perhaps that is one reason why Google has morphed from an index of the Internet, to a leads-selling model.   You search on Google and you are bombarded with ads, but not much in the way of real content.  It is no longer the card-catalog of the Internet.  Hey, that's no fun - letting people actually find out hard data?   How can a guy make a buck out of that?

In fact, if you Google "mortgage interest rates" you get about five ads for Bankrate, which lists rates, and asks you for your name and zip code for more information.  The funny thing is, I recall not a few years ago, being able to find easily, on the internet, a list of banks and lenders and their current quoted rates.   Not anymore.

US News rates lenders but doesn't provide rates.  Other sites do the same.   Are they really listing the best lenders, or just putting up paid ads?   You have no way of knowing.   Interest.com lists some actual rates and lenders (most of which I never heard of) and says the source of their data is Bankrate - oddly enough.  The joke is, of course, that most "lenders" are little more than mortgage brokers or mortgage originators, who quickly re-sell your mortgage to someone else.  And that someone else might only be the company that manages your mortgage (taking payments and paying the actual "lender" which may be a fund comprising your mortgage and thousands of others bundled together).

Mortgage brokers are an interesting beast, and I have a few friends who worked in that field.   They have to get paid, of course, and they are paid to write mortgages.  So that money has to come from somewhere - out of your pocket, for example.    They may charge an actual fee, or they get a kick-back from the mortgage company.  Either way, bottom line, you pay.   They can be useful in determining what rates are, what closing costs to expect, and can help you find a lender if your credit is less than stellar.

What is interesting, is that it is not easy for the consumer to compare loan deals online, as most sites, even if they list rates for various lenders, don't disclose points and fees those lenders charge.  A 0.1% lower rate may be offset by three points (percentage of loan) charged at closing.  And points can kill you, if you refinance often or don't stay in your home very long.

The more complicated you can make a financial transaction, the easier it is to rip-off the customer and mortgages are one area where information is opaque to the average user.   If you really want to get a mortgage, you'll have to do a lot of legwork to get real competitive quotes.   And as one of the disgruntled Lending Tree users noted, if each lender does a "hard pull" on your credit, you could end up lowering your credit score below the magic 770 level - and end up not qualifying for the mortgage you want!

All I can say is, I am glad I got off the debt bandwagon.  I only wished I did it sooner!