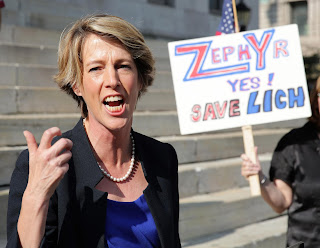 Are the stereotypes about leftists real?   In some instances, it seems people intentionally try to live up to them.

First an update:  Hillary Clinton claims in a recent interview that "nobody liked" Bernie Sanders in the Senate, which made the august body of the Senate sound more like high school.  I can see it now, Mitch McConnell and Ted Cruz putting a "Kick Me!" sign on Sanders' back as he is walking down the hallway between period bells.  They knock his books out of his hands.  "Hey!" Sanders whines, "That was a new bill I was working on!  Now it's all messed up!  It'll never get out of committee now!"

McConnell and Cruz laugh and call Sanders a "Nerdlinger" and "Loser".  In the Senate cafeteria, no one will sit with Sanders, not even Hillary.  He eats his bag lunch alone, while Lisa Murkowski and Susan Collins point at him and giggle.

In the Senate gymnasium, Sanders is always the last to be chosen for any team sports, and in dodge-ball, he is mercilessly pummeled. Hang in there, Bernie, we've all been through it before!

But what really got me going is that Sanders is sort of making underhanded attacks on his opponents, using surrogates - the sort of passive-aggressive kind of shit that is beneath a President, except perhaps Bill Clinton.  One of his supporters, with the unlikely name of Zephyr Rain Teachout, wrote an op-ed piece that basically picks apart Joe Biden. Sanders' lackeys in Iowa copied it and handed it out to people.

Zephyr Rain Teachout?   You've got to be kidding me.  And get this, she's a teacher.  Get it?   Now, first, let me make fun of her name for a while longer, because turnabout is fair play.  As I noted before, whenever black people leave the room, white folks engage in the time-honored sport of making fun of made-up "African-sounding" names.  And the white folks doing this are liberals no less - I've seen it happen many a time!   Not only that, but we mock the names of "trailer trash" who give their children "stripper" or biblical names.

Making fun of redneck names is a liberal sport, too - as illustrated by this Simpsons bit.

Think I am kidding?  Well look no further than Freakonomics, the darlings of Public Radio.  As I illustrated before, these folks spent an entire chapter in their seminal book making fun of black names and redneck names - all in the furtherance of science, of course!   So that makes it OK.   But just as naming your kid "La Zanya" is kind of weird, naming your kid "Zephyr Rain" is just as dumb.  And as you might expect, she was born in Seattle and raised in some sort of commune in Northern Vermont, not far from the unheated barn my hippie brother lived in.

But unlike him (well, not too unlike) she went to all-white high school in New Hampshire and Harvard and Yale and got lots of degrees, including a law degree, so you know, she is one of the people, now and well suited to tell all us dumb rednecks why comrade Sanders is the best choice for President!

Thank God her parents didn't give her some hetero-normative, Anglo-Saxon, white male oppressor slave name such as Jane or Alice right?  I mean, you just can't make this shit up!

OK, I am taking a piss on Zephyr Wind Teach-a-lot, but hey, it's fun, right?   I mean, to tear people down, the way she character-assassinated Joe Biden.  The point is, and I did have one, is that these sort of ivory tower folks just don't "get it" and they represent almost a caricature of left-wing thinking, which is why the Democratic party isn't connecting with people in the "flyover States."

Rather than connect with these sort of folks, they would rather change the rules of the election to abolish the Electoral College, which of course would require a super-majority vote of both House and Senate - which isn't happening - and then votes from a super-majority of the States - which isn't happening either, as the States you'd need to vote for this are the ones whose electoral power would be diminished.

Rather than connect with the voters and win elections, the far-left would rather be ideologically pure and lose nobly.  And like our friend Beto, Ms.Wind-Fart has run for a number of offices in left-leaning blue-State New York and lost every single one, including her last defeat to a Republican.  And no, she wasn't running in far Western New York, but in Downstate Clinton.   Sheesh!  Time to cash in your political ambitions and return to corrupting the minds of young law students.

Sadly, it is exactly this sort of "coastal elite" impression that will re-elect Trump. The middle-class isn't interested in financing give-aways to the transgender homeless or to college kids who can't understand why loans have to be paid back.  The working class isn't interested in some "smart person" telling them they can't have a tractor-pull or figure-8 demolition derby because it will hurt the ozone layer.  They are not interested in being told that only vegan corn dogs can be served at the county fair.  And leftists like this have never been to any such events, nor have they ever met such people.

Like my stinking hippie brother with his copy of Chairman Mao's "Little Red Book" in his back pocket, the travails of labor are all theories propagated by Marx and Lenin.  The voice of actual workers on the factory floor are not relevant to the discussion.  Hey, why have authentic experiences, when you can learn about these things in college?

This weekend, we went camping (well, RVing) and we met some nice folks.  One was retired from Caterpillar tractor at their plant in Illinois, which was closed down after a six-year UAW strike.  They reopened the plant long enough to settle the strike, then fired everyone and moved production to a non-union plant in Texas.   When I was a kid, you could not do this legally, but some changes in the law - and case law - have allowed companies to union-bust today with impunity.   There is nothing really preventing companies from moving plants to Mexico, despite Trump's bluster.

And since Trump is appointing a raft of judges and justices to the courts, you can bet that the unions will see even more power taken away from them.   While the real interests of the "working man" are ignored or neglected, the far left espouses the rights of "the workers" which they read about in a book.   They also espouse thinking that is so far-left that the "workers" won't vote for them, and as a result, the Democrats lose elections and lose opportunities to appoint judges and justices.   When things don't go their way, they cry "unfair".

Sorry, but ivory-tower theorists are not going to win the day.  Nor is "free money" or "free college" or "free student loans" and "open borders".   It is just rhetorical nonsense that has no hope of seeing the light of day (and God help the county if it ever did!).   There just isn't enough support for these ideas for them to pass, much less to make them central planks of your political platform.

Because, in politics, winning is everything.  There is no profit in a noble loss, as we will see this week during the "impeachment" circus, whose outcome is preordained and known to everyone on both sides of the aisle.
UPDATE:  Zephyr Fart is running for governor of New York.  So glad I left!