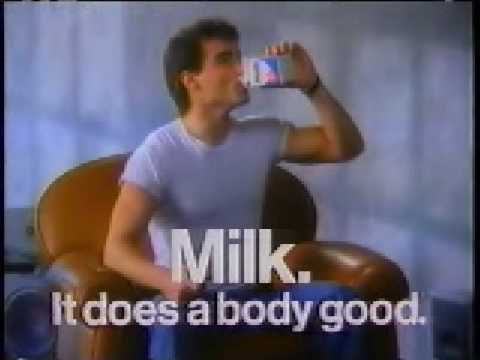 We are told that people no longer drink milk and this is why dairy farmers are going broke.  Is this really true?


In the news recently another major dairy business - Borden - has filed for bankruptcy.   In a knee-jerk reaction, the press gleefully reports that this bankruptcy was due to the fact that Americans no longer drink milk, but instead drink soda-pop.

There is some small amount of truth to this.  When I was a kid, the milkman came to the house every day and delivered at least a gallon of milk.   Today we marvel at the "high tech" development of home delivery for food, but the reality is, we did this a century ago - albeit due to the lack of refrigeration back then.   Daily milk delivery was a holdover from those old days, and by the 1970's it started to disappear.   You bought your milk at the grocery store.  And maybe then the consumption of milk declined.  When a gallon shows up on your doorstep every morning, well, you assume you're supposed to drink it.  When it is a conscious choice to make while shopping, perhaps less so.

And drink it we did, back then - big 12-ounce glasses with every meal - sometimes two or three.   Cookies and milk as a snack in the afternoon.  And don't forget to bring "milk money" to school!   In elementary school we had a "milk break" halfway through the morning - where milk crates with small cartons were brought in and we could have milk or chocolate milk, which was a penny extra.

Today, people drink Coca-Cola with breakfast and not only that, feed it to their kids with every meal.  So yea, there is a nugget of truth that milk consumption habits have changed.  A nugget of truth.

But home milk consumption represents only a fraction of dairy production.   Go to Starbucks and what are the serving?  A "coffee drink" that is mostly ice cream or has cream or half-and-half in it.  People are drinking more milkshakes than ever before, and ice cream shops are doing a banging business.

And then there is cheese - orange "cheddar" cheese that blankets the nation.   No longer is a "cheeseburger" some sort of exotic treat ("cheese on your hamburger?  GET OUT!") as it was in the 1960's, but the standard accountrement for any burger or meal.  Orange cheese is slathered on nachos and tacos and just about everything else - baked potatoes?  Poutine?  Put some cheese on it!   And let's not even talk about the trend of grilled cheese sandwich restaurants.

No, the dairy business is booming and dairy consumption is up across the board, even if we don't slam down 12-ounce glasses of milk as children anymore.

So why are dairies going bankrupt?   Well, the real reason Borden went bankrupt is that a private equity firm bought it, loaded it up with debt, and then let it fail.   They tell you this in the story, but not until they trot out the "nobody drinks milk anymore" canard.   In a way, it is like any story about a debt-laded retailer that was taken private that goes bust - it has to be Amazon and online retailing, right?   And yet, these were profitable businesses before private equity firms bought them, using the company's own debt to buy the company (sort of like a snake eating its own tail).    If debt-free, they could make a profit.  Even a modest amount of debt would have been sustainable.   But once saddled with massive debts, such companies go belly-up.

And no, it doesn't help that much of what these retailers sell can be found more easily and far cheaper online.   If I tried to rebuild my laptops using parts from the local "computer store" it would have cost hundreds of dollars instead of tens.   It would have been a non-starter.    Similarly, there is little point in even driving to such stores anymore as they no longer carry inventories, or have any sort of expertise (just some kid who knows the skew numbers and prices but not what the products do or how they work).   Brick-and-mortar retail was killing itself off, online retailing was just the coup de grâce.

But to the financial press, it is boiled down to one word:  Amazon.   The media likes simple stories because they are easier to sell to the public, who has a short attention span.   You start weaving a complicated story about corporate takeovers, "activist investors" and huge amounts of corporate debt and you lost them - you put them to sleep.   But Amazon - the online retailer that everyone loves - and loves to hate - that's something they will click on.

Alas, one cannot argue that Amazon is killing off the milk business.   Maybe Millennials?  They kill everything - why not blame them for the demise of milk?   They're probably drinking that almond milk that tastes like throw-up.   Sure, that's it!  Has to be.

Of course, the other reason they don't want to dwell on corporate raiders, junk bonds, and all of that, is the people who write the paychecks for the five remaining journalists left in the world are probably those said-same corporate raiders.   You can't say bad things about the Mitt Romneys and Bain Capitals of the world when they are your boss.

Again, explaining how this works to the plebes is like teaching calculus to a dog.   Yes, you can make money by taking down an old-line retailer.   Eddie Lampert did that with Sears - and continues to do so.   Yes, he plowed a lot of money into Sears as a bond-holder.  But in bankruptcy, this means he was the largest outstanding debtor and now owns the place.   As a private company now, he can strip-mine the remaining assets without having pesky shareholders to placate or form 10K's to fill out.

It is like parting out an old car.   You buy an older car for $500 and it is barely running.   But someone will pay you $100 for that front fender that is still good.  Another guy will give you $50 for a taillight.   You put the parts up for sale on eBay and pretty soon, you've netted $1000 on a $500 car.  Why not fix up the car and drive it?   Well, that would cost thousands of dollars, and not be a very reliable car.  It would cost more than the book value of the car and thus be a bad investment.  And in any event, you'd end up junking the car down the road when the engine seized, anyway.  It was at the end of its life, and "parting it out" is actually a smart move financially, even if it means that another classic car goes to the crusher.

You have to use analogies like that to explain these things.   I tried to explain - twice - what mortgage fraud was all about back in the go-go 2000's.   But people still don't get it.  They think mortgage fraud is something banks do to people rather than something criminals do to banks.   But that's because people like to hate big companies and no one likes making mortgage payments, particularly on an underwater house.   So it must be the banks "tricked" me into buying a house, right?

So, why do I bother?  Just go along with the narrative - Amazon killed retail, Millennials killed the dairy business.   Private equity and massive amounts of junk bond debt had nothing to do with it, whatsoever.

Of course, you have to ask yourself, who bought all those junk bonds?   The answer might be you and me if you have even part of your 401(k) in a bond fund.   People are seeking out higher yields in an era of ultra-low and even negative interest.   People will accept higher risk factors in investing, for higher yield rates. What this meant back in Michael Milken's day was junk bonds paying double-digit interest rates.   Today, junk debt is paying paltry rates - rates so low they do not justify the risk involved.

In both cases, greedy "investors" looked at high rates of return, but not the risks involved.  And the risks often involve losing everything or at the very least, losing as substantial portion of your investment.

As more of these leveraged-buyout junk-bond deals implode, maybe people will realize that.