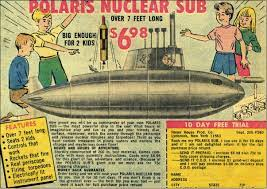 Today we buy everything online and think nothing of it.  'Twas not always so!

When I was a kid in the 1960's and 1970's - long before the Internet - there would be a "consumer column" in the local paper.  And every month or so, would be a plea from a reader who ordered something from a catalog or from an ad in a magazine and never got the goods promised.  The "consumer advocate" would then basically shame the reader for being so stupid as to order things from strangers through the mail.  What idiot does that?   The reader got what they deserved!  Idiot!

Back then the only mail order outlets you could order from were Sears or Montgomery Ward. Anything else was considered somewhat sketchy.

Well, all of that has changed, and it didn't happen overnight.  I still remember the first time I bought something on this newfangled "eBay" deal.  You sent money to a stranger and they promised - on the honor system - to send you the product!  What sort of idiot falls for a gag like that?  But in most cases - but not all - people were honest.  A few folks thought they could be clever by ripping people off, but those were quickly shut down.

Time passed and this new site called "Amazon" came along, and they would go out of their way to make sure your order was right - building up trust with customers.  People rely on Amazon and its ilk, and the only risk today of ordering online is that a Porch Pirate might steal your packages.

Of course, it wasn't seamless. I recounted before how Amazon sent me half of a toilet once for no reason, when I was expecting something else entirely. But I called them and told them what happened and they told me to keep the half a toilet which was kind of pointless as I have no use for it. But the point was, building trust was more important than returning the toilet to them.

And of course, Amazon still resorts to trickery. They offer you free shipping, and then when you go to check out, they take away the free shipping and add paid-for shipping, which you have to uncheck. Worse yet, they have a page which asks you if you want free shipping, but it's actually a come-on for Amazon Prime. It is deceptive, and it erodes my trust in Amazon. That, and the fact that Amazon has weird listings for $100 jars of mayonnaise, makes me wonder what the heck is going on with that company.

Ordering on the Internet requires trust, and once you screw up trust, you've got nothing left.  A reader notes, in response to an earlier posting, that I seem to have a lot of anxiety with the Internet.  And this is true - anyone should - as the whole thing is based on trust.  And when you invest time and energy in some stupid "app" that is supposed to make life easier or better or cheaper, only to find out it does the opposite of all three, you feel cheated and that your trust was violated.   Waiting a half-hour for "fast food" that never materializes sort of blows that trust out of the water. Having your credit card charged the next day, obliterates it.

So yes, I get a bit freaked out when an online merchant sends me a "confirmation e-mail" with dead links for "order status" in it, or requires me to download a sketchy "app" to track a shipment that I could track myself through FedEx, if they just gave me the damn tracking number.   You start to wonder, who are these people, and is this a scam?

Of course, you are protected, on a number of levels.  Your credit card company will reverse the charges if you dispute them.  But of course, that takes time, and the merchant might try to argue that they fulfilled their end of the deal, leading to a he-said, she-said kind of situation. I suppose you could always sue someone, but that's not really a cost-effective way of getting your money back.

The point is, you do business with someone, you don't want to sign up for a lot of extra anxiety. And what I found over the years is that the less business you do, the less anxiety you have.  One way to avoid problems like this is simply do with less. You can't get into a situation with a merchant if you never bought anything from them.

But sometimes, there are things you need to buy, such as a new set of tires. And the internet, having the best prices and selections, sometimes is the only option. In fact, since most local merchants hardly stock anything at all, you might as well just order online, because that's what they are basically doing.

You have to trust people online, which is hard for me to do as I have trust issues. And when a merchant you deal with starts doing odd things, it sets off alarm bells. Any business Arrangement you enter into based on a lie, no matter how trivial, can only go downhill from there. And when a merchant lies to me, no matter how trivial the lie is, I get very, very nervous, particularly if I've already given them my money.

UPDATE:  I never should have installed the "Route" app as it required that I grant access to my Google Gmail account, which means I had to hand them the password to my Google Account. Stupid!  They also wanted access to my Amazon account, which I denied.  I mean, they aren't asking for much - just the keys to the kingdom, and in exchange, they would give me information that was already readily available to me - or should have been.  I uninstalled the "Route" app and denied their access to my Gmail account and changed my Google password.  What a freaking hassle.  The only question that remains, is, what information did they mine from my Gmail account in the process?