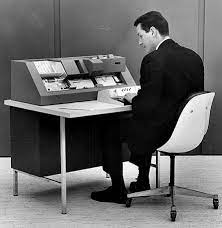 What people do for a living these days mystifies me.

I noted long ago that when someone can't tell you what they do for a living, in ten words or less, chances are, they are some sort of con artist.  And today, either the world has changed dramatically, or everyone is working as a con artist.  I don't know.

At a campground, I am talking to a fellow who has his laptop on a picnic table.  "Excuse me," he says, "I have to go to a meeting.  We're upgrading servers in Germany, which I can do from here."  I tried to figure out what he actually did for a living, but the more he talked, the less I understood.  He had his hands in a lot of computer pies, doing stuff with Customer 360 as well as Net Promoter Score.  Some of it was innocuous, some of it borderline evil.  And we had a nice discussion about that - how "tech" companies are basically spying on us all the time, often for no reason other than to accumulate data.  He had a personal philosophy about that - as well as hints on how to spoof the system.  As far as Facebook was concerned, he was a 45-year-old housewife living in Iowa.  I told him about my knitting experiment, and he got a good laugh about that - but understood intimately how these systems work.

So he does computer thingies.   That's about all I could divine about it.  And while we were both electrical engineers, he obviously kept his hand in more than I did, and although older than I, he understood this crazy modern world of computers better than I ever did, coming from the age of punch cards and mainframes.

But then again, he's still working, and I'm retired.  And I have a much nicer trailer than he does.  So I'm not jealous or anything.  Besides, I am getting burned out on all this "technology" particularly tech-that-is-not-tech.

Back in my day, we forged our Patents from white-hot steel, stamping them out in a ten-ton press, and then quenching them in hot oil.  Once hardened to Rockwell C60 we ground them in big German-made grinding machines until they had a surface tolerance of less than a ten-thousands of an inch.  Those were the good old days - back when we actually made things instead of shoveling bullshit.

Today, it seems so much of our world and work is based on accumulating data about people.  It reminds me of a cult that existed (and maybe still exists) back in the 1980's that tried to accumulate data on everyone on the planet, as part of some religious belief or something.   That was in the days of IBM PC's with 40MB hard drives - hardly enough storage on the entire Internet to take down little more than the names and addresses of people, in ASCII format.

Today?  Well, it seems that trying to get into our heads is an "industry" of sorts, but perhaps a bullshit industry.  As I noted before, the "Customer 360" concept seems to be falling from favor, in part because many countries (particularly in Europe) are passing laws restricting collection of customer data, but also because many companies are figuring out that this data is really worthless.  As my knitting experiment shows, the data you collect can be garbage.

And of course, it doesn't help any that companies never do anything good with the data.  I noted before how McDonald's screwed up their "app" - apparently on purpose - and the reviews on the Google Play store are all 1-star.  Well, all except for a series of one-word reviews with heart emoticons, that are all five-star and from "users" with Spanish-sounding names (perhaps a text farm in the Philippines?).   In other words, here is some useful data - your app sucks.  Their response?  Fix the app?  Hell no, just try to shout down criticism by gaming the system with clearly fake reviews.

It is like this vaunted "AI" which is supposed to take this data they collect and predict what we will buy next.  Unfortunately, this "intelligence" seems to be limited to thinking that once you buy something, that's all you ever want to buy.  So you buy a microwave oven, and you are blasted with offers for microwave ovens - as if you collect them or something.  Apparently, "AI" doesn't understand the difference between something you might buy maybe a half-dozen times in your lifetime, and something you buy daily.

I suppose there is some point to all of this technology.  Some of it is great, others, less so.  But I am glad to be out of the game at this point.  It seems we've moved from hardware, to software, to just spoofing each other over the Internet.  Al Gore once famously said we are moving from a manufacturing-based economy to an information-based economy.  I think we've taken it a step further, to a bullshit-based economy.  Or, as they said in the old Soviet Union, we pretend to work, they pretend to pay us.

I wonder, though, how much money these marketing companies are charging, and whether they are really generating business for their customers.  When I bought the tires for the truck, this "BB Wheels" place came up early in the Search Engine, which tells me they are using SEO techniques to push themselves to the top of the heap.  But on the other hand, they charged $50 less a tire than Amazon.  How do you make money on margins like that - and still afford to pay marketers for your SEO?

My work-from-campground friend had the answer - they don't pay these companies, the companies pay them.  Apps like "Route" actually pay the company to insert themselves between the merchant and the customer, in order to collect this vaunted data (requiring, for example, that I allow access to my Google Accounts).  By the way, a well-meaning reader tried to educate me about this, telling me they don't have my passwords or anything, just the ability to read all my e-mails.  I am so relieved!  So they collect all this data - much of it irrelevant and useless or even spoofed (as my knitting experiment proved) and who is paying for this?