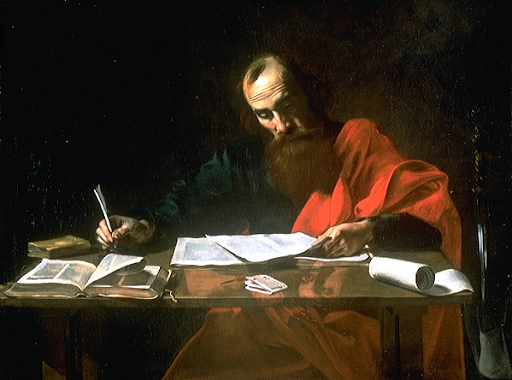 I am not against religion per se, but most religions - if not all - have a lot of skeletons in the attic.  Saul has quite the modern desk!

I mentioned before that a lot of stuff in Christianity is not very well explained.  People believe in things like the Holy Ghost, without really understanding what they mean.   Others don't believe in things like the Holy Ghost (Unitarians, for example) or other things that are in the Bible.  To some extent, everyone selects, cafeteria-style, from their religion, because most religions teach ideas that internally conflict with one another.

For example, while Jews and Muslims eschew pork, most Christians chew it - particularly in the South, particularly Baptists.  And speaking of Baptists, most profess not to drink alcohol (while secretly doing so, in many cases) while the Bible clearly states that Jesus enjoyed a good glass wine with supper.

The problem with most ancient religions is that, well, they are ancient, and thus if you go back to the old texts, there is a lot of pandering to prejudice and bigotry of that era.  Most old-time religions (and even some newer ones) relegate women to the position of property - if that.  Children are little better off.   Talk back to your parents, and well, they have no other choice than to kill you.

Of course, some folks have figured out wiggle-room on this.  For example, in the previous cite, they argue that since it is in the old testament, it only applies to Jews (the chosen people) and since Christians get the Bible 2.0 upgrade, it over-writes that nonsense.  We are free to eat pork, shellfish, and not kill our children! Of course, that fails to explain the "full gospel" Christian churches which root around in the old testament, looking for trouble, and often finding it. Like a Rorschach test, you can read whatever you want to, in the Bible, by "interpreting" it.

Christianity is an interesting beast - it really didn't take off until it found a promoter - the famous Saul/Paul who on the road to Damascaus had a vision - "I can make something of this!  Think of the angles!" and supposedly changed his name to Paul. But others claim that the two names were equivalent in Roman times - Paul being the Roman pronunciation of Saul.

His big idea?  Christianity should not be limited to Jews.  Yes, it sounds funny today, but back then, it sort of limited expansion of the franchise.  And yes, this is a problem with most groups, including our Parcheesi club - the old members don't want to let in new ones - and black-ball anyone they don't like. It sort of limits how far the franchise can expand.  Saul's brilliant idea was to let anybody in, even if the end of their penis wasn't cut off.  And today we have the Holy Roman Catholic Church as a result. Oy Vey!

I am not picking on Christianity - every religion has its variations and divisions, and often people fight to the death over these trivial (to the rest of us) differences in theology.  Islam would surely have taken over the world, if not for the Sunni/Shiite rift, which no doubt we in the West foster. Divide and conquer, the oldest game in the book. But Christians have their own bloody history, of Protestants versus Catholics. Jews have their own sects and differences, but I am not aware they have killed each other over the difference between reform and orthodox.

You would think modern religions would suffer less from this problem.  Starting out with a clean slate and a new "Bible" that you get to write, a modern religion could eliminate all this archaic "don't eat pork" and "beat your children" nonsense.  But it seems the more modern religions have their own set of beliefs that are often hard to square with reality.  The idea of everyone getting their own planet in the afterlife (as in Mormonism) seems somewhat attractive, if not implausible (suppose you get Pluto - not even a planet!).  And Scientology, well, just sounds too "out there" of you'll pardon the pun.

The problem of course, is that every religion out there has one thing in common:  They believe they are the one true religion and that anyone else is dead wrong, even people of the same religion, but a different sect.  And sadly, they often believe that folks who think otherwise are worthy only of death.  Pardon me if I object to this sort of thing.  Yes, I know it offends your "religious beliefs" which are (pun intended) sacrosanct.  But your belief in murdering me conflicts with my belief that I should be allowed to live a natural life.

And of course, it goes without saying that if every religion is the one true religion, then a vast majority of the planet is going to hell, because by default, most folks are believing in the wrong God.

As the whole Saul/Paul thing illustrates, religions are not created by God, but my man.  Bibles are not the word of God, but an interpretation - or a series of interpretations - of what mortal men (and yes, it is usually men, not women) think is the word of God.  And men are fallible, even if God isn't.  So you have to take religion with a grain of salt, even if you are a devout believer.  Because men get things wrong, all the time.  And often, they twist things around to favor their own interests. Yes, shocking, I know.

I am not sure what the point of all of this is, other than I was thinking the other day about Pauline Christianity.  In Sunday school, this wasn't talked about a lot.  We just assumed that the day after Jesus rose from the dead, Christianity was invented and it pretty much took off from there.  Oh, sure the Romans fed Christians to the lions, but they eventually came around.  And sure, maybe the Catholics went off the rails a bit, but Mr. Martin Luther straightened them right out, eh?

Well, maybe not.  The creation of Protestantism is itself an example of how men create religions - not Gods.  And often, the motivation behind creating new religions or sects is not based on celestial matters, but earthly ones.  Luther was pissed-off that the Pope was selling indulgences.   Henry VII was pissed the Pope wouldn't give him a divorce.  Lots of people get pissed-off at the Pope, it seems, even today.

There are more flavors of churches, as a result, than there are fast-food restaurants.  Go into any town of any size, and you will see a half-dozen churches, from the Catholic to Presbyterian to Unitarian, to storefront "evangelical" churches to Baptist churches (both black and white).  We all want to believe in something, but not the same thing.

That is the nature of belief.   It doesn't matter which version you believe it, it wasn't meant to be taken literally, but figuratively.  Belief is comfort, and can provide relief and perhaps even strength.  It is only a problem, in my opinion, when it replaces reason, or is used to justify odious things.

The man running the company that rips off thousands of people will say that Jesus blessed him, which is why what he is doing is holy.   Slave-owners used the Bible to justify slavery (and yes, it is in there, in the Old Testament).  People can use religion to justify torture, war, or whatever - and have, and do, and will continue to do.

UPDATE: Two readers respond.  The first makes my point, inadvertently.  He argues that I am not "qualified" to comment on belief, that only ordained ministers, priests, pandits, Imams, Bishops, Cardinals and Popes can make such interpretations of religion!  Where do I come off claiming to know anything about God?

Exactly my point.  No one has the Copyright or Patent on God.  No one has the inside track to the almighty, even if they claim so.  Maybe some religion guy studied religion in school, that doesn't mean he knows a helluva lot more than you or I do about the great mysteries of the universe - Why are we here?  What is life?  What is consciousness? What happens when we die?

But organized religion would like to sell you these answers, for a fee, of course.  And you can't disagree or argue with any of their pat answers.  They's experts!  You know, people like Cardinal McCarrick, right?  Uncle Ted is such a nice fellow - and he knows.  So no questions, please!  Those guys are experts - don't try this at home!

I believe that God is accessable to everyone and no one at the same time.  No one is more of a expert on God that you are (or I am) and no one really has the answers to the unanswerable questions in life - except that we all get to find out, in due course.  And compared to the life of the cosmos or infinitiy, our lives are a tiny drop in the bucket.  The wisdom of 50 years or 100 is nothing compared to all there is to be known.

Another reader points out that our Pope Poopa the 1st has said we should go back to non-Latin mass, even as many parishioners live the pomp and circumstance of it.  But he's infallible so he must be right.  Problem is, the last Pope - who is still alive, btw - was also infallible, and he was the one who wanted to go back to Latin mass.

They can't both be right and both be infallible.  One has to be wrong.  And one is - but who it is, isn't the point.  The point is, they are just humans, like you and me - with failing bodies and clouded minds and one with a bad intestine.

Religion sucks.  But that doesn't mean you have to be an Atheist, either.  Like everything else, mankind takes a good thing - God - and mucks it up for good!