Laws of Our Fathers 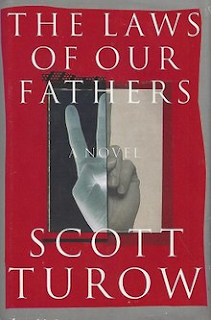 Are all baby boomers so whiny?
I recounted before that that we tend to concentrate, in our society in the "New Releases!" whether it is the latest Space Jam movie (no, really?) or the latest album drop (and accompanying analbumparty).  We forget about things from years' past, or even a year ago, and let's face it, most of it is forgettable.
But it is interesting, sometimes, to read the old releases, and often we find, at book exchanges at campgrounds, or in these "little library" boxes, some interesting reads from years gone by.  Sometimes, you even find good CDs or DVDs as well!
I found a pristine copy of Casablanca in the $1 bargain bin at the Goodwill the other day.  It is one of the exceptions to the "New Releases!" rule, but again, having its own arc and trajectory.  I recall first seeing it back in the 1970's in an "art house" revival, when young people suddenly rediscovered old-time black-and-white movies and suddenly everything old is new again.  There was a big-band revival at about the same time, which sort of alarmed our parents, who were a little chagrined that their kids were appropriating "their" music.   50 years later, I sort of feel the same way, when I see some teenager "rocking out" to music from my own youth.
Of course, today, the trend is to put old "classic" literature and movies on the trash heap - the work of "dead white men" - and subject it to revisionist modern history.   Anything more than a year or two old, seems quaint or outmoded, when viewed from today's viewpoint.  That is not my intent in discussing Scott Turow's book - to put him on the trash heap - only to point out that every generation has its own defining moment.
The plot (and not much else) is summarized in the Wikipedia entry cited above:

When last seen in Turow's The Burden of Proof, Sonia Klonsky was a prosecutor with the U. S. Attorney's office in Kindle County with a failing marriage, an infant daughter, and a single mastectomy. She becomes one of the narrators here. Now she is a Superior Court Judge presiding over the murder trial of one Nile Eddgar, who is accused of arranging the murder of his ghetto-activist mother. The story is told in two parallel narratives, one regarding the current trial and the other taking the reader through the 1960s.
Many of the minor characters in The Laws of Our Fathers also appear in Turow's other novels, which are all set in fictional, Midwestern Kindle County.