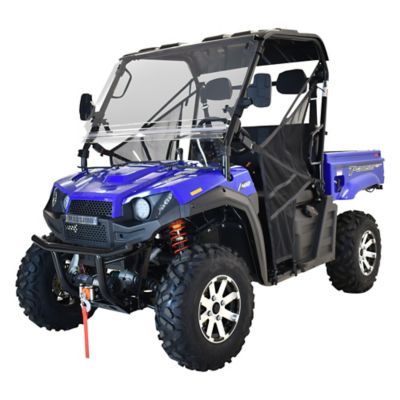 Lookalike products from China are cheap - but they may not last long!

ATVs are the new jet skis.  They are vehicles that make little sense, other than for people who live in the wilderness - and that's not you and me.   While they started off as little three-wheeled off-road trikes (famously featured in the James Bond film, Diamonds are Forever) they morphed to four wheels when people discovered - yet again - that three-wheeled vehicles are basically unstable.

Since the four-wheeler ATV, as some folks called them, became popular, they have morphed into bigger and bigger machines, until they are the size of small cars.  Many companies sold utility four-by-fours, such as the Kawasaki Mule or the John Deer Gator.  Those were bought by park maintenance people mostly, but quickly homeowners in the country started snapping them up.  The "UTV" or "side by side" became popular, and like with pickup trucks, they started out as two-door models and quickly morphed into four-door vehicles.

So today, the typical off-road four-wheeler is a vehicle about the size of my old 1948 Willys Jeep, designed to carry four people off-road, at speeds of 50 mph or more, sometimes far more.

What is the point of these vehicles?  Well, like with jet skis, people invent reasons to own them, and then buy them.  When we had the lake house, there was about a half-mile road from our house to our lakefront site and boathouse.  Our neighbors either drove their cars there or had some sort of ATV like a Kawasaki Mule.  We looked at some ATVs at the Bass Pro Shop and they were certainly cool-looking, but at $15,000 (back then) not affordable.  So we bought the Jeep instead, for $2000 on eBay and after eight years sold it for... $2000 on eBay.  The $15,000 ATV would have been worth half its purchase price - or less - by then, if indeed it was still running.

I am not "against" ATVs, but as a personal choice, think they are silly.  If you want the same effect for less money, buy an old Toyota 4x4 and take the doors off it.  Really the same thing.  But what got me started on this was two recent events.  We rode on a "rails to trails" path on our Mountain bikes, and it was fun.  We went about six miles, had a picnic, and then rode back.  We saw a total of four ATVs on the trail - not a lot - and while they moved over as they went by, they certainly didn't slow down - going 50 mph at least, or so it seemed.

They didn't seem to be having much fun, either.  Even in a four-seat model with a full roll cage, everyone was wearing full-face helmets.  Gee, that's fun! Ride around in the wilderness at 50 mph with a bucket on your head.   Oh, well, some rednecks can't have fun unless there is an internal combustion engine running, somewhere, even if it is just a generator or a lawn mower.  On the "rails to trails" site, some mountain bikers complained about the ATVs, say there was too much traffic and that they ruined the trail.  I disagree.  Four ATVs in two hours isn't an awful lot, and frankly, I think they packed down the gravel making it easier to ride a bike.

But the point is moot - you can't build an 80-mile long trail in Maine and tell the locals it is only for out-of-towners on expensive mountain bikes - there would be a revolt.  After all, they are the ones paying the taxes to build the trail.  It is possible to share.  Like I said, I am not against ATVs, I just don't see the point of them, personally.   One young fellow on an older-style ride-on four-wheeler zoomed by and he must have weighed 350 pounds at least.  One reason we pedal our bikes is to not end up like him.  But as I noted in earlier postings, kids today start out with the Barbie Jeep at age 2, and never really walk, ever again, except to and from the car - and they park as close-in as possible to eliminate even that, as much as they can.  It is why we are so unhealthy in America - we have machines do everything for us.

But getting back to topic, those big ATVs aren't cheap.  $15,000 for a two-seater is just a starting price - for a quality unit from a major manufacturer such as Polaris or Kawasaki or Honda or whoever.  So it is tempting, when you see a super-cheap unit for sale at the Tractor Supply or the Wholesale Club or the Harbor Freight, to think, "Gee, I can have a four-wheeler for nearly nothing!"  But as the old saying goes, you get what you pay for - at least most of the time, anyway.

A few years back, I was at the boat ramp, and a cargo boat came ashore bringing trash from nearby Cumberland Island.  Among the trash and treasures was what looked like a nearly new side-by-side ATV. I asked the guy why they were throwing it away and he explained that it was a cheap Chinese-made knock-off of an ATV and when it broke early-on, there was no way to fix it, as no one stocked parts for it.

Such ATVs may look like a more expensive Honda or whatever, but the materials used are often inferior and break more frequently.  Some folks derogatorily refer to the pot-metal they use as "Chinesium" as it it a kind of metal you simply don't find in products made elsewhere.

This experience was repeated recently, when a friend came by in a four-seater ATV.  They explained they had bought one of these Chinese-made ATVs and the front axle broke.  They looked online for parts and they could only find one axle shaft for $500 (I paid only $150 for one for my BMW X5!) and when they got it, it didn't quite fit right and tore itself up in no time.  They "converted" the ATV to two-wheel drive by removing the front driving chain, and then gave it to their son-in-law.  No doubt, when something else breaks on it, it will go to the dumpster, or more likely be parked in the side yard.

Some folks like to run down Chinese-made products.  And yes, a lot of the stuff they make is crap - things that look like quality products, but made cheaply.  There are a plethora of Chinese-made cars, for example, that are knock-offs of famous brands, such as BMW.  Looks like it, but it ain't it.  But they get better with each iteration, much as the Koreans did before them, and before them, the Japanese.  Eventually, they will catch up - and maybe are catching up already, as they own some major brands such as Volvo.

So maybe in a few years, these knock-off Chinese ATVs will be a good bargain - but likely the prices will go up as well.  But in order to compete with Honda and Polaris et al. they will have to have real dealers with real parts and service, not merely sales outlets through big-box stores.  Because if you can't get some little part for a complex machine - the little part needed to make it work, well, you might as well not bother.

But like I said, we went through this with the Jeep - it turned out to be cheaper, in the long run, to drive an antique Jeep than it was to buy one of these $20,000 side-by-sides.  And our 1941 Ford Tractor (also $2,000 from eBay) was a lot more cost-effective than a $30,000 Kubota, which would have been worth half as much when we sold it.  The tractor - we sold that for what we paid for it as well.  Net cost, zero, other than maintenance and gas.

Of course, not having five acres of lawn to mow is an even better idea.  And no, there was no real reason we needed to have yet another car, just to drive to the lake.  It was fun, but also a lot of work.  But if you really think you need one of these things, beware of the Genie Effect.  Super-cheap prices either mean the whole thing is a scam, or whatever it is, is so poorly made or parts are unavailable, such that it is not a bargain.