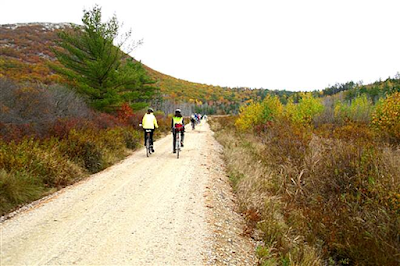 Online reviews can be somewhat useful, but don't take them as gospel!

As I noted in my previous posting, we went on "rails to trails" bike ride and it was nice.  Mark read online reviews of the trail and some mentioned the ATV traffic, which I assume on the weekends or holidays, could be more than what we saw.  We saw three ATVs - four if you count the one guy who went by us and then came back an hour later.  They all looked like they were having fun, wearing full-face helmets on an 89 degree day.  But it was no big deal - we shared the trail.

Our neighbor in the campground told us they were going to go riding on their mountain bikes and we told them about the trail.  "Nope!" he said, "I read the online reviews - too many ATVs!"  So we explained to him that we went yesterday and it was just fine and a lot of fun.  But he would have none of that.  The comments of some anonymous stranger online were gospel (it was after all, posted on the Internets!) and the actual live in-person review from someone standing in front of them, meant nothing.

They decided to ride on Route 1 instead.  No ATVs to worry about, just 70 mph logging trucks being driven by distracted drivers who are texting - and swerving onto the narrow shoulders constantly.  Even if you don't get run over and killed, it isn't a pleasant ride.  Riding a bicycle with cars rushing by isn't a fun experience.  Why anyone would do it - when there are alternatives - is beyond me.

But what made this interaction interesting to me was how the fellow was denying reality in favor of an alternative reality.  A comment made online by someone he didn't know carried weight, while the current actual live experiences of a human being he does know, meant nothing.  It should be the other way around.

When you take advice from anonymous strangers, it is bound to end up causing trouble. You have no idea who these people are as they often hide behind "handles" or made-up names.  You have no idea how much experience they have in a given area or whether their opinion is of any value.  It is like the review of our favorite Mexican street-taco place.  Some yahoo on Yelp! criticized the tacos because they weren't crunchy and had no lettuce, tomatoes, or cheese on them.  "We ended up going to Taco Bell!" he said.  A true gourmand.  Of course, he didn't realize that authentic Tacos Al Pastor don't have cheese on them.  He also didn't realize that on the back page of the menu was the "Gringo Menu" of American-ized Mexican dishes, including crunchy tacos with lettuce, beef, tomatoes, and cheese - as well as the burritos the size of your head, which Americans seem to like.

Should one give weight to such uninformed opinions?  Of course not.  The person whining about the ATVs may have been there on a busy weekend (Memorial Day) and maybe they were just whiny kind of people - Kevins and Karens of the world.

Or maybe not.  Maybe the problem is, we give too much weight to the written word, without thinking about who is writing it.  I seem to have no problem with that in my blog - people are always telling me I am full of shit.  But others - particularly blogs with fancy graphics and layouts, catchy names, and followers and comment sections - they are taken as gospel.  Youtube channels are even worse.  Put together a compelling graphic and people will believe anything.  Some yahoo is running for Governor in California on no platform other than his Youtube vlog channel about finances.  His qualifications?  About the same as mine - schmuck.

For some reason, when people see things on the Internet - some people at least - they suspend all disbelief.  I was going to go tenting this weekend with a friend, who had to back out due to a death in the family.  She decided not to get vaccinated because she "read something on the Internet, and has questions!"  As if the world owes her answers!  The answers are out there, of course, but won't be found on Fox News or Infowars or Qanonsense or any conspiracy-theory YouTube channel.  Friends of ours who are medical professionals tried to explain it to her - to no avail.  Someone on the Internets said something and until that person changes their mind, she "has questions."

You see how this works, and how disinformation sticks in the brains of some people.  The conspiracy theorist buys into some wacky conspiracy theory and dares the world to prove them wrong.   They kind of have the "burden of proof" thing backwards.  They can believe whatever wacky thing they want to - with no evidence, proof, or experimentation to prove it so.   But those trying to change his mind have to marshal facts, evidence, and scientific opinion to prove otherwise.  And since he has a pat answer to all of that anyway, you might as well not bother trying to change their mind.  They read something on the Internet, and they have questions.

I thought this exchange with my camping neighbor was fascinating, as it illustrated how this works.  People are willing to submit to authority - any authority - without question, but the opinions and experiences of their fellow man mean nothing.  This is how dictators come to power - and how religions are started (is there a difference?).   People are willing to believe in Bibles without critique.  They will blindly follow the words of another.  It is scary, how much power one could wield this way.