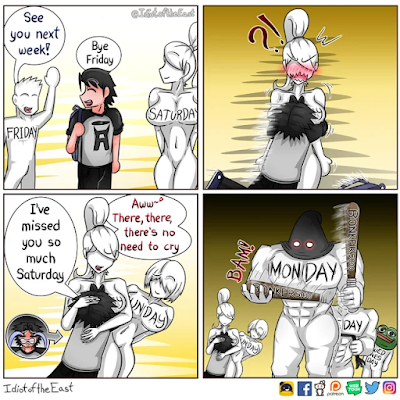 People have no concept of what time is really like.

We are finding plenty of places to camp in Maine, even on the water, sometimes with no reservations, or reserving only a few days in advance. How is this possible?  With all the "CoVid Campers" out there in their shiny new rigs, surely places must be full to capacity!

And they are.  On the weekends.

We are spending the weekends parked in Mark's brother's yard, so we don't have to fight the crowds.  And it is funny, if you go to a campground on the weekend, it is jammed with people - every site full.  But by Sunday morning, many are packing up to leave, and by Monday afternoon, the place is a ghost town.

The calendar and the clock are constructs.  How we divide days into weeks and months and years is somewhat arbitrary.  There is no secret special reason why January 1st is when it is - other than it was roughly correlated to the Winter Solstice and even then was off by nearly a couple of weeks.

As I noted before, one reason I believe religion became popular early on, is that most religions offered a day off - the sabbath - where you didn't have to work.  This was appealing to peoples who were forced to work seven days a week.   It is funny, but some religions, such as Othodox Judasim, forbid "work" on the sabbath, and some interpret this to mean you cannot even turn on or off a light switch.  I am told that some Orthodox Jews have a Goyim friend who comes by and does the switches for them, if they needed a light turned off.  I was programming the clock on our stove and noticed it has a "Sabbath Mode" for Orthodox Jews.  I didn't explore this, but I guess it is some way of turning the darn thing off, one day a week.

Well, eventually, the Sabbath became the Weekend, and the rest is history.  And yes, when I was young, the only time I had off was the weekend, or two-weeks' vacation time (or sick leave) and one would scramble to enjoy those brief respites from work.  The sad thing was, some years, every weekend it would rain, and during the week there would be beautiful weather.  Sort of sucked, when you are young and want to go water-skiing.

Of course, I was not happy with that state of affairs, and tried to structure my life otherwise.  At the Patent Office, they offered us the opportunity to work 10 hours a day and take one day a week off - Monday, Wednesday, or Friday.  Most chose Monday or Friday, so they could have three-day weekends, which was at least a little better than two days - at least you have one day that is sort of quiet.

But as I started working from home and being self-employed, the entire concept of weekends went away.  We found ourselves forgetting what day of the week it was - or even what time it was.  You have to stop yourself from calling a client at 9PM at night on a Sunday - check your watch and calendar first!

I guess there are reasons why we live this way.  If everyone took their own weekends "whenever" then it would be hard to get business done.  Before the smart phone and the Internet, people had to keep regular office hours, so that we could work together and communicate with one another.  So I guess we had to all work at the same time, sleep at the same time, and so on and so forth.  And in a less crowded world, I guess that worked, too.

But maybe, going forward, we will move - or are moving - to a new form of working and recreation, where the "weekend" if not abolished, at least becomes less important.  And already we are seeing this.  I run into a lot of people who are in RVs and working - on days when they want to work.  The world has caught up to what I have been doing for the last 20 years or so.

But it is funny, how people say silly things like how a Monday "feels different" than a Sunday or a Wednesday - when they are artificial constructs of man.  The days of the week don't exist - they are just labels and an ordering system we have imposed on time - and time cares naught about it.

So what does this have to do with finances?  Well, a lot, actually.  Because the vast majority of humanity still are slaves to the calendar and the clock, it means that you can save a considerable amount of hassle and time by time-shifting your life.  Restaurants offer better deals on Tuesdays than they do on Saturdays - they offer discounts to draw in customers during a slow day.  Lodging places often offer better deals for weekdays versus weekends.  Grocery stores are less crowded and the selection often better during the week (particularly just before the weekend, not after).  Just about everything is more pleasant.

As I noted before, when we lived in the DC area, it seemed so crowded and busy - if you lived according to the calendar.  Everyone commuted to work at the same time, went out to eat at the same time, and clogged Route 50 to the eastern shore every weekend.  Once we were liberated from the calendar, Alexandria, Virginia seemed like a small, Southern town with little traffic.  The beltway was never backed up, and Route 50 was a pleasant drive, not a miles-long traffic jam.

What got me started on this was reading restaurant reviews online (I know, a waste of time, right?) for a local clam and lobster shack.  The reviews were mostly positive but the few one-star reviews all had something in common - they were reviews from people who tried to get a table for a party of six or more, on a busy weekend night.  They all complained about waiting for tables and slow service.  Meanwhile, the folks who popped in for a late lunch on a Wednesday, said they had a delightful time.  Funny how that works, eh?