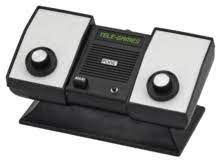 A reader writes with a link about an older book about how we are amusing ourselves to death.  It is an interesting book, and perhaps prescient.  It got me to thinking about the time-wasters we have today - the television, the internet, the smart phone, and increasingly, the gaming console.

I think my parents bought a "Pong" game for us for Christmas in 1975 or so.  It played one game, Pong, and maybe two if you count the "Hockey" version.  It was pretty lame and we got bored with it pretty quickly.  Some folks actually paid 25 cents a game to play it in bars, if you can believe that.

Over time, the games got better - PacMan, Space Invaders, Frogger, and the like.  And PC games started to take off. In fact, gaming sort of drove PC hardware design, with things like texture-mapping and whatnot requiring more and more powerful graphics drivers.   I wrote about 200 Patents on these things. While I played some of those games over the years, I never took much of an interest in it. Getting "good" at some games required an awful lot of quarters - or an awful lot of free time.  I just wasn't into it.

The kind of people who got good at video games were the kind who spent a lot of time in bars (or if underage, arcades) or spent hours on the console or PC at home.  These were often unpleasant people and people of low ambition.  That was back then, circa 1985-1995.

Since then, of course, gaming has gone berserk.  The consoles are often more powerful than most PCs, unless of course, you build a gaming PC with powerful processors and lots of fans (and colored lights, for some reason).  The graphics get more and more realistic, and you can play against people from all over the world.

Of course, there has been a downside to all of this. Many games are "first person shooter" games, where you get points for killing people - often very realistically.  People say they don't warp your psyche, but one has to think there is some sort of PTSD that must result from virtually killing hundreds if not thousands of people, over time. But the gaming industry (not the gambling one that uses the same name) claims otherwise.  And hey, they should know, right?

Other games allow you to buy up to different levels, or add armaments or armor or just bling.  And you can win money at some games, but I'm not sure exactly how - or why that isn't considered gambling.  I am sure it is declarable income, though.  And online games can mean anything from a complex and powerful 3-D "world" generated using a console or powerful PC, to a simple addictive cell phone game like Candy Crush, Farmville, or "Angry Birds."  Yea, WTF with that?

The behavior of gamers hasn't helped the industry much.  Gamers have brought us such nice treats as Gamergate, Doxxing, and worst of all, Swatting - where people have been actually killed, in reality, not in some game.  Is there something about video games that makes people turn into assholes?  In addition to all of the above, there is just the ordinary everyday misogyny, homophobia, and racism.  Perhaps this is because of the demographic - mostly white, mostly male, age 15-35, the target demographic that every marketer salivates over.

But taking all that aside, is gaming just another time bandit?  I ask this because I like to read comics online, and while there are many, many good ones out there, there are a lot of mediocre ones, where the artist draws strip after strip on the same subjects - how crummy their lives are, how hard it is to get motivated, and how games are distracting them from productive work.  Gaming is a constant theme.

I digress here a bit, but back in the late 1970's and early 1980's there was this fad called "Dungeons and Dragons" which alarmed parents (particularly the reactionary Christian kind) as being some sort of devil-worship.  It was popular for a while and then faded from view.   Well, today, it is back with a vengence - it seems everyone is playing this tabletop game, or an online version, again.  And again, I ask the question only, is this another distractor?

Perhaps, but perhaps online gaming is even moreso.  In any endeavor today - television, websites, social media, streaming, online music, online gaming, online shopping, the merchants of these electronic services measure their success in terms of "engagement" - how long you can get someone to watch your video, your television show, your social media site, your online game.  The longer you can hook people, the better off you are, as your ad rates (if any) are higher.  Of course, online games have no ads, do they?  Or do they?

Where games excel is in this "engagement" feature.  You can always turn off the television.  Even the smart phone, you have to put down once in a while.  Social media gets boring, even if you check your Facebook page once a day.  But gaming?  It can consume hours of your day, every day, much as television used to, back in the day.  In order to get "good" at a game, and advance to the next "level" you have to invest hours - and it is an investment - in playing, unless you just cheat and buy your way up to the next level (if they allow that - that sort of thing has backfired on some prominent game franchises).   And once you feel "invested" in the game, you tend to stick with it, until maybe you plateau at a certain level or your attention is drawn away to a new game on the block.

Investment in time is an interesting concept, and marketers know all about it.   When the car salesman keeps you at the dealer for five hours, waiting to do the deal, it is intentional.  The idea is to get you to feel "invested" in the process.  You've spent hours there, why walk away and start all over again at a different dealer?  So you stay and try to salvage a bad deal, which is always a bad idea. Once you are invested in any system, whether it is a social media page, a brand of car, a brand of beer, a drawn-out financial transaction, you are less willing to chuck it all and start over.  That's one reason why I run 20-year-old software - I am too damn lazy to re-learn yet another new system, so I stick with what I know.  Blogger knows this - after nearly 5,000 posts, I'm not about to switch to Wordpress.

As I noted before, stupid cell phone games like Candy Crush and Farmville are designed with addiction in mind - an electronic drug that gives you tiny amounts of dopamine in smaller and smaller doses over time, getting you to come back to the Skinner box again and again.  More complex video games, such as first-person-shooter and adventure games are the same way, but perhaps worse.  You read all the time about gamers spending hours in interactive games, unable to "pause" because they are playing against someone else online.

You read about gamers wearing adult diapers so they can soil themselves rather than stop playing.  Or take this "gamer chair" (which may be merely a humorous item and not really intended for real use) with a built-in toilet.  I digress, but why are all "gamer chairs" black and red like the leather seats in my old M Roadster?  I guess I am just ahead of my time.

Television was bad enough.  Before the cord-cutting movement, people were watching an average of four hours or more a day.  Figure out how much time you spend sleeping, working, commuting, and just taking care of your basic needs, and that is pretty much all your free time left in the day.  Of course, people are now doing the same thing online, with social media, streaming, and whatnot.  But I think Gaming is the 600-lb gorilla of them all - people spend hours and hours in online games, far more "engagement" than television ever had.

Does this mean I am "against" online games?  Don't be stupid, and please, save the flames from trolls who read the first three sentences and then fire off a response.  It is only that it seems to me, we are indeed amusing ourselves to death, and the folks selling these amusements are getting better and better at "hooking" us on these things.  Electronic drugs with electronic addictions.  Sure, they amuse us, but they also enslave us, keeping us captive to flickering blue screens for hours at a time and adding nothing whatsoever to our personal bottom line.

Like I said, I like to read the comics every morning, but it gets boring when I read the umpteenth cartoon by a low-self-esteem cartoonist whose strip is nothing but gags about how they lack motivation or suffer from depression - with the punchline panel always showing them at a gaming console.  Maybe funny once, but not 100 times.  But an interesting insight into the minds of some folks - clearly they believe they have some sort of gaming addiction problem, and it is a problem if it is distracting you from your work or other life tasks.

It fascinates me, how better and better these merchants are getting, at hooking us on things.  It is hard to resist a lot of these attractions, too, other than to simply unplug from the grid as much as possible.  I try not to look at my cell phone much (and that is one reason I resisted getting a smart phone for so long).  I read my e-mails, balance my bank accounts (daily - the online game I am winning, lately!), maybe check the headlines, the comics, and the NOAA hurricane tracker.   Then I turn it off.  Nothing but junk mail and junk calls from "card services" (again?) in India.

Yes - gasp! - sometimes I go out and leave my cell phone at home, turned off.   Radical I know.   Perhaps my only vice - about an hour or so a day - is this blog.  But that is just stream-of-consciousness bullshitting, which doesn't require a lot of effort (as many of you have noticed and are glad to remind me of).

But four hours a day?  Five?  Six?   Sorry, but I can't see that for any one thing in my life, except perhaps sleeping!