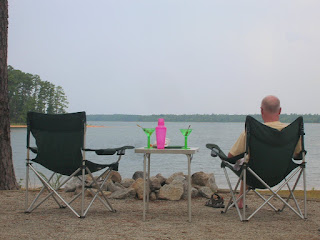 There are companies out there selling "memberships" to campground chains.  These memberships cost thousands of dollars and require annual fees from a few hundred to a thousand or more.  Even then, you may still have to pay for a night's stay at a campground that is part of the chain.  Is this really worthwhile?

Well, you can "do the math" and we'll do some here, but you can spot a raw deal by the way it is presented.  And when you approach any kind of commercial transaction, the following signs should tip you off that there are no great bargains to be had:

1.  The actual price is obscured and not easy to find.  If you ask point-blank how much it costs, they hem and haw.

2.  The price is amazingly flexible.  If you don't bite at the apple, they offer you a different deal - and they have deals for every imaginable price point.

3.  Resale value is either zero or half what the original owner paid.

4.  The item in question isn't sold normally, but through high-pressure sales techniques, such as seminars and whatnot.

5.  There are a myriad complex rules to follow and what you are buying is never quite clear.

Now, all four of these indicies could be said to correspond to how timeshares are sold - and indeed they do.  Or even a new-car sale, if you are particularly obtuse and wander into a car dealer without doing any research whatsoever, and let them keep you there for hours at a time.  In fact, a lot of ripoffs can be tipped-off by these techniques.  Good bargains present themselves and don't need chicanery to sell.

We are in a campground that is part of a chain.  Most of these chains, most are owned by Affinity Marketing, who owns the largest RV dealer network in the world (Camping World) the largest RV Club (Good Sam), the Trailer Life and Motorhome magazines, the Woodall's guide, the Good Sam guide (and affiliation and endorsement for select campgrounds that pay for such affiliation) and also at least one of these "membership" campground gigs.  If GM had this kind of power in the marketplace, there would be calls to break it up under anti-trust laws!

Anyway, when we check in, there are signs inviting us to join a "seminar" talking about membership. One of the guys working here sells memberships and gets a commission on each sale.  So stop by Saturday!  Free Coffee and Donuts! (No word on a free gifts like they do with timeshares).  I would like to go, but only as a shill.  "Say, these campground memberships are a good bargain!  My wife and I are going to buy one! Why not invest in your vacation!" Maybe the guy would slip me a $20 if I hyped it up as an "audience member."

So right off the bat, I am skeptical.  If this was such a freaking deal, I would not have to be sold on it.  We ran into a couple who inherited a "lifetime membership" which raises an interesting question - how can you re-sell a lifetime membership?  Well, apparently you can, but some "contracts" are different than others, so it depends on each contract whether it is re-sellable or not, or what rights you have under the contract.  Not confusing at all, right?  As one observer noted, people who have these memberships for decades barely understand them.

And the guy on the phone selling them to you?  He's on a quota to sell, sell, sell, and oftentimes doesn't understand the contracts very well himself.  And of course, verbal misrepresentations are quite common in sales and are nearly impossible to enforce, even if you can prove they were made.

And then there is the actual bargain - for the base membership, which can run $6000 or more, plus an annual fee of $600 or more, you are limited to parks in one part of the country - Northeast, Southeast, Northwest, etc.   Plus, you can only stay 14 days at a given park, and then have to leave for 7 before going to another park in the chain.  So for someone who wants to spend three months in Florida, it doesn't sound workable, unless you upgrade to "platinum" or some such.  For someone travelling, I guess it might be useful, but you have to time your stays to fit this 14/7 ratio.  The more complicated you can make any financial transaction, the easier it is to rip-off the customer.  And in this case, these "contacts" are a complicated as a Rube Goldberg contraption and about as opaque as lead.

In terms of "cranking the numbers" I will defer to this couple, who did the math on this.  Like anything else, it depends on how you use it and how much you pay for the membership (their numbers assume buying a resale membership for $3700).  If you spend six months a year in member locations (and there are not many) it could be cheaper than a State Park.  But if you only camp for say, 90 days, it could as expensive as the nightly rate at the KOA.  For them, the deal-killer was the low number of participating parks, which are located only on the coasts.

Plus, I think the reservation system and the 14 in, 7 out, requirement, would make it a nightmare to plan your trips.  I am sure that many of these sites book up early, which is why they allow reservations so far out.  And the higher your membership level, the further out you can book.  Suppose you find that no matter what, you cannot get a site for the days you want to go, where you want to go?  Like with a timeshare, this sort of ties your hands with all these crazy rules.  Sure, you can "play lawyer" and try to figure out the system, like cruise ship aficionados do - where to get the free cheeze-its in the Captain's Lounge - but I think those sort of games are silly and pointless.   They throw pennies at us, hoping we spend dollars.

This site is little more than a cheerleading site for one of the campground membership companies.  But they point out it is possible to buy a "one year" contract for about $600 or so, and later "upgrade" to a "lifetime" membership for another $7500 (!!!).  You still have to pay the annual $600.  So why would anyone buy a "lifetime" membership then?  Well, as we noted earlier, everyone is an equal member, but some are more equal than others.  And if you want to spend the winter in Florida without moving from place to place, you have to pay to get the whoop-de-do level of membership.

For me, it is a non-starter. Just the way they price these things (opaque) and explain then (even moreso!) turns me off.  If you can't describe your product and the terms of the agreement in ten words or less, forgetaboutit.  It is like Cable TV or cell phone contracts - the salesman may say one thing ("The price is only $39.95!") but the reality is something else (taxes and local surcharges are extra!).

Plus, we like to stay at Army Corps parks, State Parks (Such as Mistletoe State Park, shown above), and other out-of-the-way locations that are more like camping than RVing.  The park we are staying in right now is OK, as it is near (one mile!) from the beach.   But it is a charmless place with row upon row of RVs and plenty of screaming children. Why do little girls make that shrieking noise?  It sounds like someone is burning them with a flat iron.  Anyway, such commercial parks are not something we stay at very often.  And a choice of only 81 parks from coast to coast (all located near the coast?).  Not much of a selection!

So why do people buy these things?  Why do people buy timeshares? They don't buy them, they are sold them.  The salesman puts a lot of pressure on them, and these oldsters (mostly oldsters) figure they can finally beat the system and not pay so much for their nightly stays.  After all, they decided to go full-time RVing and sold their house, but now they realize it costs a little more - a lot more - to live in an RV than even in an apartment.  So this seems like a "way out" of a bad life choice.  It is like getting a payday loan to pay off your payday loan - or refinancing your house to pay off your credit cards.

But that brings me back the the main deal - why do it this way?  If this is such a deal for the campers, doesn't that mean the RV park isn't making as much as they could renting sites the ordinary way?  And of course the answer is simple:  Most people end up paying more and getting less.  It is like extended warranties - even with the legit ones (and most are outright frauds) most people spend more on the warranty than they ever get back in repairs.  And the companies count on this, just as the "campground membership" people count on it.

Sure, Dad and Mom work the system and camp for as little as $20 a night.  But for every couple like that, there are maybe a dozen more who are at best, breaking even, and even then, a majority are coming out behind, only because they aren't camping as much as they thought they would, or they can't get into the parks they want to, because someone else with "Silver" membership got in ahead of them.

And of course, every Dad attending the seminar thinks they are going to be Lucky Mouse and score a deal with this.  And why not?  What could possibly go wrong, buying a "lifetime membership" when your life expectancy is two decades, at best?  And of those two decades, maybe only a few short years are left for RVing.

It is, in a way, like so much about RVing that makes little economic sense.  People selling their houses and buying half-million-dollar motorhomes without thinking through the end game.  Folks get giddy about buying a motorhome or trailer, and then finance it over 10-20 years, without thinking about the depreciation curve. Then they go to Camping World and buy every piece of tchothke that they sell there.  You can't have enough pink flamingos or paper-plate holders!  Then they take their new coach to a $150-a-night motor-coach resort campground - and are lucky to get 6 MPG getting there.

This is not to say it is all bad.  We ran into a fellow who sold his house in Virginia at the peak of all this Real Estate madness and bought a used park model RV on a lot with a view of the lake, for $35,000.  The annual lot rent (for the six-month season) is $2300.  In the winter, they rent a condo in Florida.  Not a bad way of life, and not a lot of commitment on either end.  And pretty cheap living, too, considering you are living half the year on the lake, and half at the beach.  But then again, he's not really RVing, but living in a trailer park - and there is a difference.

I can see a time when we will give up the RV - and this is likely our last one.  Mark keeps making noises about getting another boat (take the cost of RVing and add another zero to it!). The only thing free about boating is the wind - and perhaps anchoring out overnight (check your tide charts first!  We spent one night "on the hook" only to wake up the next morning, tipped to one side and hard aground on dry land!)

I wonder if the marinas have latched onto this "membership" deal.... oh, wait, they already have.  Oddly enough, a lot cheaper than campground memberships!