What Time Is It? What Day? 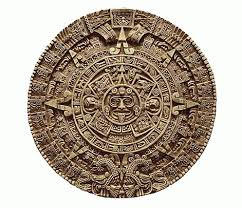 One of the most subtle normative cues in your life is the calendar - and the clock.   Most folks just take the date and time for granted, not realizing that this very simple thing affects how you think and act - and is also a symbol of power.
People - not very smart people - are whining about the end of the world because it was foretold, supposedly, by the Mayan Calendar.   This is, of course, a lot of hogwash.  But it points out how calendars and how the days, months, and years are tallied, are a huge normative cue that you may not even appreciate.
For example, here in the West, we generally use a Calendar devised in part by the Romans, but demarcating the years based on the life of Christ.   Right there is a powerful statement as to what is, and is not important in Western Culture.   Christianity is embedded, right into how we demarcate time.
Of course, not everyone follows our calendar.   The Japanese use the "Year of the Emperor" which gets confusing, as Emperors only live so long, and you have to predicate each year based on which Emperor you are talking about.   But again, the message is clear - the very time we demarcate on this planet is based on who is in power - who is in control.
Israelis use a Hebrew Calendar.  Islamic countries use an Islamic Calendar.  But due to the dominance of our culture and technology worldwide, you can bet that when it comes to technology, telecommunications, finance and banking, we count the years from the date of birth of you-know-who.  So, while other cultures may have their own calendars, the commonly accepted international calendar is, well, the Christian Calendar - just as English is the standard International Language and the Dollar the standard currency (too bad about that Euro, we all thought it was a comer, too).
For Americans, this all seems very normal.  But to someone in another part of the world, having this Christian calendar shoved down your throat must seem, well, an obvious normative cue.
The planets, however, have their own agendas, and spin and rotate based on their own inherent characteristics.  Our feeble attempts to demarcate this into an orderly system have largely failed.  Today we have modified the Julian calendar to accommodate the planet's insistence on not rotating an exact 365 days every year, adding leap days and even leap minutes and seconds.
And with the change of seasons, we enact something called Daylight Savings Time.   And that is where you tend to notice these normative cues.   When people start messing with the clocks, it messes you up, regardless of whether it is being jet-lagged between time zones or when the set the clocks back or forward every year.   Your brain realizes that time is an organic thing, and these numbers on the clock are rather arbitrary - and a cognitive dissonance sets in.
The interesting thing about this whole deal is how subtle it is.   Learning to tell time and the days of the week, and the months of the year, are things that are first taught to children.   And we accept this - under the radar - without ever thinking about the fact that a Tuesday and a Saturday are the same thing, only given different names by mankind.
The days of the week are a particular case in point.   Our entire culture is shaped around them, with many folks going from cradle-to-grave thinking that a Saturday and a Sunday are somehow "different" than a Wednesday, and that you have to work or go to school five days a week, and then goof off or go to church on the other two.
It is a normative cue that is not even up for discussion.   And you may feel that a Tuesday "feels different" than a Thursday.    But they are arbitrary labels.   And what position of the stars we chose as the beginning of each year is arbitrary as well.  But you start talking that way and, well, people freak out.  They need time to be harnessed to the yoke and put to their own uses - lest it all spin out of control.
Time-Shifting, as I have written about before, is one way to make better use of time.  Work on the weekends, take Wednesday and Thursday off (or whatever).   There is less traffic, less hassle, more space, more availability.
But the great unwashed masses of humanity head out every Friday to go to the beach, or to the mountains, or whatever, all in the same herd they traveled in when commuting to work (and in the same cars).   And being crowded together - by time - seems normal to them.
In any argument, the key is to challenge the underlying assumption.  Usually that is where the weak point of the opponent's argument lies.  How we delineate time - in terms of hours, days, weeks, months, and years, is an unspoken assumption that is tied into our power structure - and our religious structure as well (often the same thing).   Challenge that, and well, you are basically an anarchist.
Newer Post Older Post Home