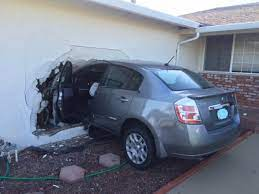 Pedal Confusion Happens - to the best of us!  Women and the Elderly seem particularly prone.
The government released a report the other day, citing pedal confusion as the cause of the "unintended acceleration" crashes of many Toyotas.   It was an eerie echo of the Audi 5000 pedal confusion fiasco of thirty years past.
Then, as now, a popular car, known for its quality and durability, was suddenly being tagged as having a weird, unexplainable "unintended acceleration" problem. Sales plummeted, and people blamed "mysterious electrical gremlins" or problems with the cruise control.  Studies were conducted, tests made, lawsuits filed.
The ultimate conclusion?  People were confusing the gas and the brake pedals.
Of course, this was shouted down by a host of people - who want to externalize their problems.  After all, they know the difference between the gas and brake, right?  It had to be someone else's fault!
But the reality tells another story.   On models offered also with manual transmissions, the incidence of "unintended acceleration" was negligible.  This alone tells the tale.
In most incidents, the person reporting describes the engine "revving more and more, the harder I pressed on the brake pedal!" - this should tell you all you need to know, too.  They are pressing on the gas, which causes the exact symptoms stated.
After the Audi 5000 fiasco, Volkswagen, the parent company of Audi, has installed software in their cars that returns the engine to idle when you step on the brakes.   This is a good idea - as it eliminates the practice of riding the brakes, which a surprising number of people do.
The only problem with this technique, is that it won't stop the unintended acceleration problem caused by pedal confusion (which is the overwhelming majority of situations). All it does is insulate the company from litigation by proving that, if the person really was stepping on the brake as they claimed, the car would have slowed down.
Why are people subject to pedal confusion?   Shit happens, as they say, and I can recall two times in my life when this happened - both in cars with manual transmissions, and the end result was stalling the car - but only after it leapt forward several feet - unintentionally.  But if it can happen to me, it can happen to anyone - and it need only happen once to have tragic consequences.
The effect is frightening.  You step on what you think is the brake, and the engine revs.  Without thinking, you step harder, and the engine revs more.  You panic and your brain freezes - danger signals are coming in from all over - your "fight or flight" instinct is raised.   And yes, the last thing you think about is what pedal you are pressing on.
Why does this happen?  It is an interesting psychological phenomenon - you do the same thing day in and day out, and one day, your brain just slips a gear and you drop a plate, instead of setting it down on the table.   We all make mistakes.  It is a predictable outcome, not some weird outlier behavior.
Older people often are subject to this problem.  My Grandfather once drove his Cadillac up over the curb, from a standstill, and through a shop window.  No one was hurt (thank God) but he handed in his license the next day.  This is a very typical scenario, and YouTube is full of security cam videos of cars doing just this.  Why do you think they put steel bollards at the entrance of the Quickie-Mart?
Others are not so fortunate.  One elderly gentleman drove through a farmer's market after a pedal confusion incident, and killed a number of people.   This happens with regularity.
What is distressing about these incidents is that people don't want to blame themselves but rather want to blame the car maker.   This is what is wrong with America, of course.   It is not that pedal confusion could even be a possibility to them - it is not even possible!   And yet, every year, dozens, if not hundreds of such incidents occur.
So called experts were able to "replicate" the problem, but only after shorting out many safeties in the systems our outright faking the results.  These "experts" of course, are often hired by lawyers wanting to sue the car companies, so you have to consider the source.  Also, the tests fail to rationalize why, in most cars, the brakes can overpower the engine, particularly at low speeds:

60 Minutes aired a report titled "Out of Control" on November 23, 1986,[21] featuring interviews with six people who had sued Audi after reporting unintended acceleration, including footage of an Audi 5000 ostensibly displaying a surge of acceleration while the brake pedal was depressed.[22][23][24] Subsequent investigation revealed that 60 Minutes had not disclosed they had engineered the vehicle's behavior — fitting a canister of compressed air on the passenger-side floor, linked via a hose to a hole drilled into the transmission[21][22] — the arrangement executed by one of the experts who had testified on behalf of a plaintiff in a then pending lawsuit against Audi's parent company.[25]

And of course, once the media gets ahold of the story, what happens?  Everyone jumps on the bandwagon, reports an "unintended acceleration" problem, either hoping to cash in on a law suit, or wanting to blame the car-maker for what would ordinarily be their own malfeasance.

While some safety advocates have pointed to an increase in reports of unintended acceleration after Toyota switched to using electronic throttle control, NASA said in its report that it found no such correlation.  Reports of sudden acceleration in Toyota cars did spike whenever there was national publicity focused on the issue, however, NASA said.

Are some cars more prone to this?  Perhaps.  One report I recall reading noted that the Audi had pedals that were located more to one side, and thus one might press the wrong pedal by accident.  So it is possible that pedal location and design may play a part, but not necessarily "electrical gremlins".
High heeled shoes or poorly made shoes may be to blame, too.  Women wear the worst sort of shoes (as do old people) tending to concentrate on style more than comfort.  You cannot "feel" through a hard leather sole, and a high heel?  Forgetaboutit!
There are documented cases of cars slipping into gear, particularly some Fords and Chrysler's that pop out of "Park" and into "Reverse". (UPDATE:  A reader notes that they don't "pop out" of Park, but rather tend not go get into Park due to linkage issues).  However, in recent years, pedal interlocks have been installed in most cars, requiring your foot to be on the brake before the car can be pulled out of Park.  This also eliminates problems when children try to pull on the shift lever (or pets, for that matter).
So what can you do to help prevent pedal confusion?  A few things:

1.  No "two foot driving" - the right foot is for the gas AND brakes:  The left foot is for the clutch.   If you have an automatic, your left foot does nothing.  Lazy drivers drive with both feet, and as a result, it is easier to jam the left foot onto the wrong pedal.   If you use ONE foot, you know you have to take it OFF the gas and put it ON the brake, which leads to less confusion.
2.  Use your parking brake.   You should set the parking brake on your car whenever you park it.  If you don't use it, the cables will rust in place and then it won't be there when you need it.   The parking brake might *help* hold the car in place if you run into such a problem.
3.  Shut your car off, if idling:   A car idling burns fuel, and if it running for more than 10 seconds, shut it down.   More important than that, a car idling is a very dangerous thing.  Some cars, if not securely put into PARK can pop back into REVERSE (new brake interlocks alleviate this problem in newer cars).  But regardless, an idling car is a dangerous thing.  Just shut it down.
4.  Don't walk in front or behind of an idling car, if you can help it:   Granted, this is hard to do in the city, when you have to walk across the street and feel the hot breath of a line of idling cars.  But when at home, avoid wedging yourself between a car and a garage wall.   Once slip of the driver's foot, and it is all over, for you.
5.  Know how to shut down your car in an emergency - and what to expect:  In one celebrated case, a cop in a loaner Lexus didn't realize that to shut off the motor, you have to push and hold the start button.  A floor mat jammed under the gas pedal while traveling down a long hill, and he stabbed at the start button in a panic.  Everyone in the car died in a high speed crash.  In a remote area (empty parking lot) practice this at low speed.    Be able to turn the key OFF without LOCKING the steering column (which would be a disaster).  Note how the steering gets hard - and the brakes will too, shortly, once the engine is off and the power accessories shut down.
6.  Be ready to shift into Neutral: Again, most people don't think to do this, as they are in a panic.  It may over-rev your engine, but it is better than the alternative.
7.  Don't think you are immune: Pedal confusion can happen to anyone, not just the elderly.   It happened to me when I was in my 20's.  Fortunately, I was able to react in time.
8.  Drive a stick-shift:  In addition to eliminating the pedal confusion problem, you will likely get better gas mileage (on most cars, particularly depending on driving style) and have fewer mechanical problems. In addition, a stick-shift is the best theft protector around  - most young punks can't drive them!

You feel bad for these folks who get into these pedal confusion accidents.   They don't want to think that an error they made caused them to run over their own kid or get into a horrible accident.   But it does happen, with regularity.
And one can understand why they want to externalize this horrible thing - after all, no one wants to blame themselves - the car was "possessed".   And an army of sleazy lawyers will help you sue the car companies, too.
Many modern cars are being equipped with adaptive cruise control - which adjusts your vehicle speed based on the car ahead of you.   You can lock onto someone else's car and just go.   You hope they are a good driver, of course.   This same technology is being used to activate the brakes when a crash is sensed - and perhaps this technology could be used to avoid pedal confusion, or at least minimize the results of it.
On-board "black boxes", while not preventing the problem, at least make it easier to diagnose it - by proving that the driver was pressing on the accelerator and not the brakes.
But what is interesting about this phenomenon - and it has been going on for decades - is the insistence by some people that the car is at fault, regardless of the fact that the incidence of these accidents is very small, spread across every make and model car (with the exception of those with stick-shifts).    In fact, you can expect to hear a comment from someone in  3...2...1.. Flame!
But that is just weak thinking - the knee-jerk reaction to blame someone else for your problems, or problems in general, and particularly when you can blame a faceless "big corporation" and claim they are "covering up" documents (Google the 'net, it is full of such nonsense).
Newer Post Older Post Home