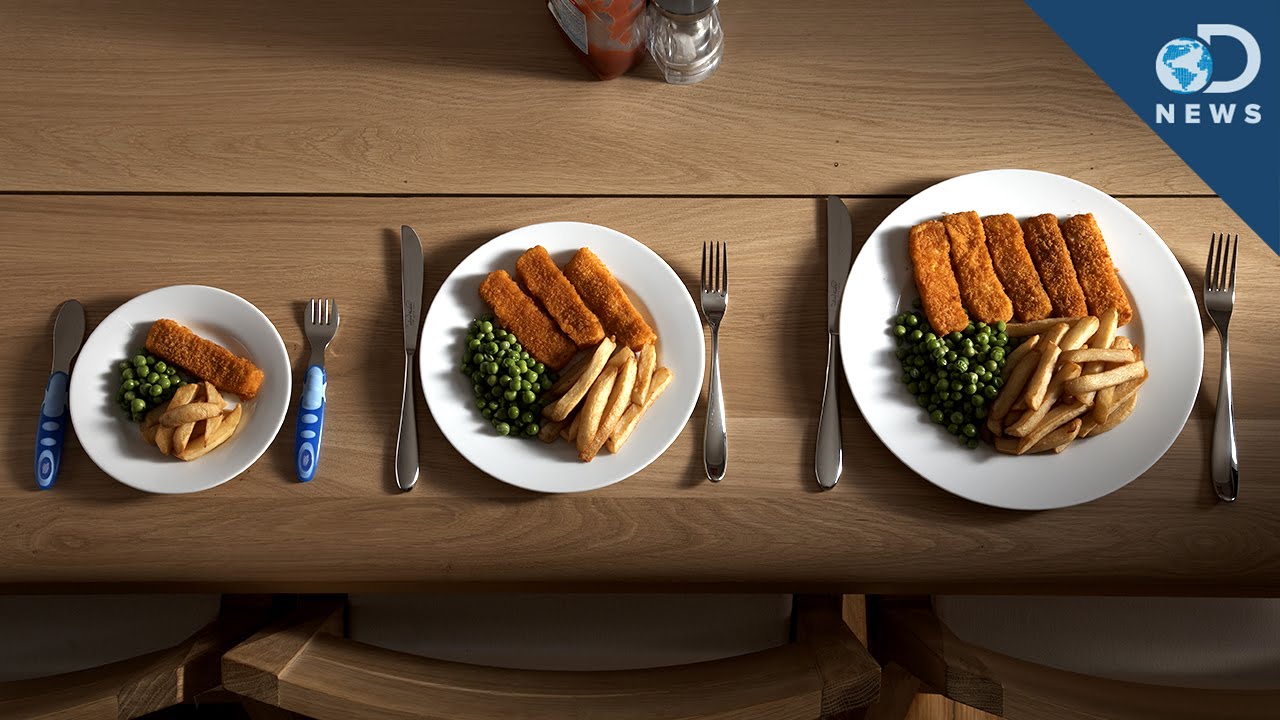 Portion Size is one Normative Cue that we don't often think about.


I talk about normative cues a lot, because they are really, really important.   These are the very subtle, or not-so-subtle things in our lives which "fly under the radar" and directly into our consciousness.  These are very small things - or large - that tell you, subtly, what is expected as a norm.

For example, let's take serving size.    Seems like a simple and direct thing, but it isn't.   When you go into a restaurant and order an entree, they they bring out a plate of pasta the size of your head, what is this saying?   Well, the subliminal message is this:  This is a normal-sized meal for most people.

So, in effect, they are giving you "permission" to over-eat.   And this is why we have so many people in this country who are overweight and mystified as to why.   "It can't be that I am eating too much," they say, "After all, I eat just like everyone else!"

And this is true, but everyone else is fat, too.

As a result, you can sell people like this a diet plan based on their "hormones" or special protein shakes, or whatever - as they have already summarily discarded the most obvious and only solution to their weight problem - eating less.

McDonald's, which is everyone's favorite whipping boy (not to me.  Don't like it?  Don't go.  I don't) is a good example of portion size and normative cues.

In 1967 when my parents would make big deal about going to McDonald's outside of Chicago for a 25-cent hamburger and order of fries, the menu was quite different than it was today.  The menu was basically four items:  Hamburgers, Cheeseburgers, Fries, Shakes, and Soda.   Maybe they had the fish sandwich, I don't recall.   But the Big Mac would not be introduced until the next year, and Quarter Pounders and value meals were years away, as was "Supersizing".

The portions were tiny.  As a child, I might have a single burger and a "small" fries, which came in a paper pouch (like the Starbucks "Short" coffee, I've seen these "small" fries sometimes as an off-the-menu item.  Usually today, if they are used at all, it is for the Happy Meals.)   My Dad might eat two.  And when those "Big Macs" came out, we all thought they were the height of excess.

Soda Pop came in 8, 12, and 16 ounce sizes - Small, Medium, Large.  Back then, many vending machines sold soda in 10-ounce bottles.   The 12-ounce size was really a modern invention, created in the 1930's by Pepsi, in an effort to snag more of Coke's business.  Today, we have 44-ounce buckets of coke you can get, and it is, well, disgusting.

To a person entering a Mickey-D's today, the big item thrust forward on the menu is the "Value Meal" which is often a fairly large sandwich, compared to the original tiny burgers.   The original burger is still there, sort of as an anachronism.   For a while, it was a "value meal" - offered with two burgers and a "large fries" that are about 4X the original.

But a Big Mac Value Meal, in small form, contains 839 Calories  and   1170 Calories in large.   Is this a lot of calories?   Well, for a 2,000 Calorie-a-day diet (which is "normal") that is about half your daily intake in one meal.    No, this is not a good idea at all.   And skipping another meal to compensate is just worse.

And yet, you and I have driven through the drive-through at McDonald's and bought the value meal and thought nothing of it - and years later, despaired when we step on the scale and find ourselves another pound heavier.   How could that happen?   I don't eat that much, right?   Not any more than other people do, anyway.  Right?   Right?

The same is true with finances.   People are mystified as to why they are living "paycheck to paycheck" for years at a time.   Well, there is the car payment, to be sure.   But there is no way to get around that, is there?  Right?  Right?    Well, actually, there is.   But most people assume that since their neighbors all have new cars, that it must be "normal" for them to have one as well.

And Cable TV - and smart phones.  "Everyone has Cable!  All the kids at school have a smart phone!"  Right?

Kids in particular are vulnerable to normative cues, and you could sell them dogshit on a stick, if they thought all the other kids thought it was "cool".   Shops like Aeropostal exist only because 16-year-olds are deathly afraid of being "different" - and always have been.   By the way, wearing your Aeropostal shirt, once you leave high school, is really dorky.   It's like being a 22-year-old Justin Bieber fan.  Not cool, but rather, kind of creepy.

If you start to look for them, you will find normative cues all over the place.  Our whole society is structured around them, and people look to them for comfort and guidance.  There is an old joke that if you get three people together and form a line, others will line up behind you, out of sheer habit.  Why?  Well, if people are waiting in line for something, it must be good, right?

During one of the hurricanes we went through in Florida, the power was out for days.   And the local radio station and television stations were reporting about the long lines people were getting into for bags of free ice.   People stood in line for an hour or more to get a 10-lb bag of ice.  Why?  Well, it was free.  And everyone was doing it.

But we couldn't figure out why.  Why drive 5 miles, waste an hour and get a bag of ice that would not last more than  a half a day?  The food in your refrigerator would go bad.   Eat it, or throw it out, period.   Otherwise, learn to live without power for a few days.  It's not a big deal, really.

The key to getting ahead financially is to spot these normative cues in your life and understand what they are saying to you.   Because oftentimes what seems "normal" really isn't, but is a distorted version of reality - such as the "normal" caloric intake for most Americans today, or their debt and spending habits.

Once you can look at things like this in the abstract, rather than in the framework of the cues presented, you can make better informed decisions - and understand  why so many people complain all the time about how rotten they have it, when everything they do is "normal".
Newer Post Older Post Home