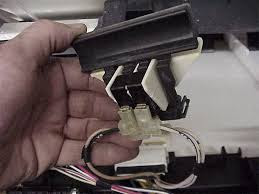 Before disassembling the door latch on your dishwasher, try bending the metal tang it engages, down slightly.
As I noted in earlier postings, consumer-grade goods can be a good bargain, if you treat them like the piece of shit plastic garbage they are.  They are designed for a 10-15 year service life, but may last longer with proper care.  And since they are inexpensive, when they break, you can basically toss them away.

But treating them gently is the key.   We once bought an Electrolux vacuum, thinking that, this time for sure, our cleaning lady would not destroy it.  But Electroluxes are made of plastic these days, and she wrecked it in short order.   How?  Mashing buttons, yanking cords, forcing fittings, whipping the power cord out of the wall, that sort of thing.   People do this without thinking, it seems, feeling that perhaps machinery needs to be show who is boss.  It is a bad idea.


Karcher Pressure Washers are also nice products - but again, made of plastic.   I learned the hard way that trying to drag them around by the hose will irrevocably break them.  A great product, at a great price, and if you treat it gently then it will last for years.  I highly recommend them.  I highly recommend treating them gently.

Similarly, you can bust up a car pretty good these days by mashing buttons, slamming doors, and just generally treating it like dirt.  Many car parts today are plastic, and you have to treat them gently.  You do so, they last forever.   And unlike Grandma's push-button Rambler, modern switchgear does not require you "Mash" the button to make it work.  Just a gentle touch.  You can break the door window out of its track, on a BMW, just by slamming it hard - it will snap the attachment clips.  Buttons will fly off, if mashed hard.  This stuff is meant for a gentle touch, not lumberjack handling.

Most appliances today, and even cars and computers, use membrane switches which require a very, very gentle touch.  Mashing such buttons can break them - right away.   And usually the OFF button is the one that gets killed, as people MASH it five or six times, "to make sure it really is OFF!"  Once is enough, Bubba, gently!  I was fortunate enough to get this fixed under warranty.  You can bet we treat these appliances with kid gloves, nowadays.

My neighbor has a Whirlpool washer.   I have the same washer in Kitchen Aid trim.  He was trying to fix the latch, convinced it was broken somehow.   But the reality was, his wife was in the habit of "slamming" the door closed to latch it, instead of just pushing it in until the plastic latch "clicks".   As a result, the stainless steel metal "tang" that the latch engages, was bent slightly up, so it no longer engaged the latch.

The simple fix was to gently bend down the tang slightly until the latch would click into place.

The long-term fix was to instruct the user that modern appliances, made of plastic, have to be babied, if you want to get a 10-15 service life out of them.   No longer can you slam, cram, mash and abuse controls, door, racks or whatever.   Stuff breaks.

Note that these latches, as shown in the photo above, have two micro-switches to tell the computer when the door is open, so as to shut off the machine, if you open it, mid-cycle.  These switches can be a failure point, and I suspect that slamming and jamming the door open is one sure way to make them break.

Smokers, for some reason, seem to be the worst at this, bashing everything in sight.  I might add that it seems that poor people are prodigious car-door slammers, button-mashers, lever-yankers, and power-cord-whippers.  Most of the crap they buy (and they buy a lot) ends up broken in short order, as a result.  The poor make poor decisions and not taking care of their stuff is one of those decisions.

Having children is a problem as well.  Kids slam car doors like they are winding up for the opening pitch in the World Series.  They bang, clang, and abuse equipment, and break it all in short order.   While on the phone with my sister once, she interrupted the call to admonish her child.  "Don't do that, hon!" she said.  I asked her what he was doing, and she replied that he was jumping on the open dishwasher door until it bent down and touched the floor.

Her blase attitude about it sort of shocked me.  "Oh, we just bend it back," she said, "and it doesn't leak too much."  Too much.   But you can only "bend back" a dishwasher door so much.

Leaving a dishwasher door open, by the way can be very dangerous, if you have steak knives in the cutlery basket, and a child falls onto it.  If you look at most modern dishwashers, you'll note they avoid this problem by putting the cutlery basket in the door, or making a large "handle" on it that extends upward to shield those nasty knives.  Keep the dishwasher door closed.   Tell you kids appliances are not toys.  You can get injured in a number of ways in addition to putting your hand on the hot stove.

And for the "Dagnabbit!" crowd out there, who still thinks carburetors are better than fuel injection, and they "just don't make things like they used to!" I have two points.  First, we ain't going back, so just shut up and die already, you outdated fossil.  Or get with the program and try to learn something new instead of shutting down your brain because you are over 40.

Second of all, the "good old days" were not all that good.   Back in the 1980's we bought a Kitchen Aid "professional" dishwasher, back in the day when Kitchen Aid was not just another brand of the Whirlpool group.   It was made entirely of metal.  It was heavy as hell, and the handle on the latch was this enormous beer-tap like thing, made of chromed and nickle-plated steel.  It was a steam-punk dishwasher, with 1960's styling cues.

Was it better than these new plastic washers?   Not really.  First, it was loud as hell - so loud that we had to turn it off until bedtime, or you could not hear yourself think.   Second, the kick panel was forever falling off it.  Third, it started leaking after about five years.  Fourth, it started rusting at the same time.  After eight years, it was pretty well shot.

Oh, and it cost a fortune at the time - about $500 as I recall (in the 1980's).  So much for "professional grade" appliances.  We replaced it with a used plastic Frigidaire dishwasher, which we bought from a neighbor for $75.  Not only did it last longer, it was quiet as a mouse.

So, these modern appliances are fragile and should be treated gently.   But they are better values that clanky old steel units, and often have improved operating features.   And they can last a long time, if treated gently.

You just have to reprogram your brain to stop treating everything like the column shift on a '55 Chevy.